Stories of Gender Based Violence 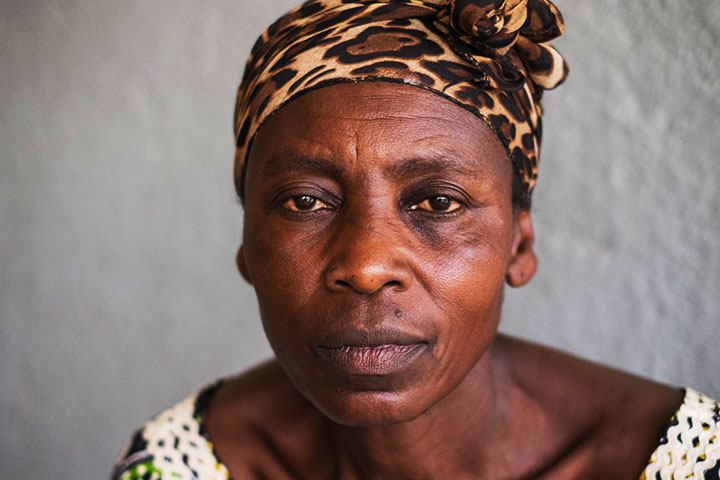 -When I crabbed on my knees home after the rape, I was not a human being anymore. When I came here to Panzi I started to live again, tells Kika Ngalja.

Kika Ngalja is 50 years old, and come from the Shabunda province in Congo. She is the mother of five, the youngest only one year old. All of them live with KIka.

Some years ago Kika was victim to a horrible abuse which she has spent a long time to overcome.

-The abuse took place when I was right outside our village to fetch water. I was attacked by a group of men from the rebel group FLDR. Three men was standing above me and raped me one after the other. When the third had raped me, he took his military jacket, twirled it around the mouth of his gun, put it inside me and shot. It donated like a bomb and totally destroyed my abdomen, Kika Ngalja tells.

-I screamed and my brother came to help me. They tried to force him to rape me and threatened to kill him, but he refused. Then they parted my brother before my very eyes. They cut him to pieces.

-I crabbed on my knees home to my house. I did not feel I was a human being anymore. I was a living dead, says Kika.

Walked 30 miles to get help

This day Kika was the victim

-My abdomen was destroyed. I tried to help myself with warm water, but nothing helped. I had heard about Panzi in Bukavu, the hospital that has specialized in operation on women who have injuries in the abdomen. I decided to try walking my way there, Kika tells.

The Panzi Hospital is 30 miles away from Kika’s village, so this was a long journey.

-We walked for two hours at a time and then slept in the bush before walking again, all the way to Panzi, she tells. When she reached the hospital she got treatment.

-Here in Panzi and Dorcas (the rehabilitation center for women subjected to sexualized violence) they do not care whether you are destroyed as a human being. They saw me. They did all they could to help me. It is God’s mercy that I came here and got treatment for my injuries and traumas, Kika says.

Wants to give to others

-Through rehabilitation in Dorcas I have regained myself. I have got self-esteem, learnt a lot and got friends. When I was ready I received a capital of 50 dollar to start up my own business. I began to sell rice. First by smaller quanta, then by the bigger. Now customers buy from me in huge quanta, Kika tells, who now wants to expand her business.

-I have contributed to a few panels for the roof of Dorcas’ house. It’s so nice to be able to give something back, Kika says, who has used the money she earns to get ahead in more than one manner.

-I have bought a plot and built a small house. I have what I need including food. The violence has stopped and I am healed. I think God helped me come to Dorcas´, says Kika.

Strong solidarity among the women

She also tells about a special relationship between the women she has met through Dorcas’ house.

-We women who are healed and live in Bukava outside Dorcas´, keep together and help each other. Before I came here I was despised of everyone in my village, nobody wanted to share their drinks with me. Now I experience equality.

Kika wish strongly that people participate in the fight against those who commit these cruelties.

-Even though they have lost strength now, there are still armed rebel groups here in Eastern Congo. They still destroy human lives. I think, however, that sexualized violence can be brought to an end. We must go on fighting by influencing our societies. As a woman who has been through the horrors, I want to say to other women who are scared: Don’t be frightened, don’t lose your hope! What is most important is that we care - and care for each other, claims Kika Ngjala.