The floods in Pakistan

​This year, a heavy spell of monsoon rains in Pakistan has brought 87% times heavier than the average downpour. 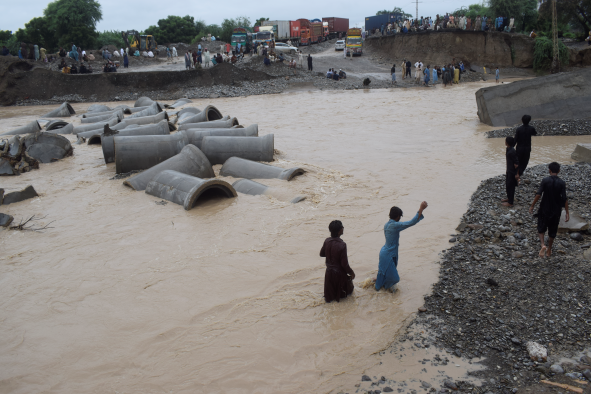 Heavy rains have lashed urban and rural areas alike, where challenges in the latter have been multiplied tenfold. Baluchistan, already an underdeveloped province, seems to be hit the hardest, especially in terms of infrastructure damage.

According to the National Disaster Management Authority (NDMA), on 16 August, 635 people died across seven provinces, most of them in Balochistan (196 fatalities). More than 1,010 individuals have been injured, while damage has been reported to at least 72,500 houses. In addition, 110,440 livestock have been lost and more than 2,800 km of roads and 130 bridges have been damaged.  The unusually long monsoon season is ongoing and may cause further flooding.

NCA Pakistan is responding by offering CR WASH support in Sindh and Baluchistan. The duration of this response is four months and with the help of our long-time WASH partner, Research and Development Foundation ("RDF"), the response will reach 9,800 with WASH services in District Dadu, Sindh and District Lasbeela, Baluchistan.

Furthermore, this response will also be pivotal in lobbying for funds from UN, ECHO or NMFA should the said humanitarian donors issue calls to meet the emerging needs.

Key features of NCA`s response are:

Well done to NCA Pakistan on their timely response so far to help meet the needs of beneficiaries in the most marginalised areas.