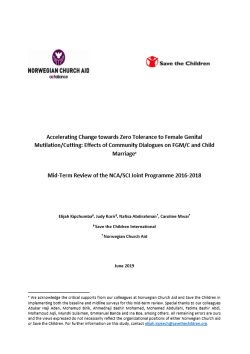 Since 2016, NCA, Save the Children (SCI) and local partners have conducted a joint programme in Somalia, East Africa around specific forms of gender-based violence (GBV) against girls. The programme aims to help eliminate female genital mutilation/cutting FGM/C and child early and forced marriage (CEFM).

Following a phase 1 evaluation, phase 2 expanded into rural areas where FGM/C prevalence is higher, and was implemented in six districts of Gedo region and Puntland state.

In 2019, NCA and SCI conducted a mid-term review to assess their joint programme against outcome indicators, and baseline (2016) figures where available. This evaluation combined quantitative, qualitative and participatory methods and used the reflective methodology to review the programme’s Theory of Change.

Unlike the mid-term review, the baseline study did not include qualitative data or distinguish between different types of FGM/C. This may have affected findings*.

Overall, FGM/C prevalence in the area increased from baseline to midline, especially among girls aged 5–10. There was a 13 percentage point reduction in respondents committing not to cut their girls in future.

FGM/C is increasingly medicalised. 63% of new cases were performed by health professionals, compared to 51% at baseline.

100% of FGM/C survivors indicated that the support services they received had been beneficial.

Although support for child marriage remains high and its incidence has increased slightly, actual incidence appears to be much lower than locally perceived incidence.

Despite increases in these practices, both female and male community members appear to be more aware of the health effects of FGM/C and CEFM.

This report is the product of its authors, and responsibility for the accuracy of data included in this report rests with the authors alone.