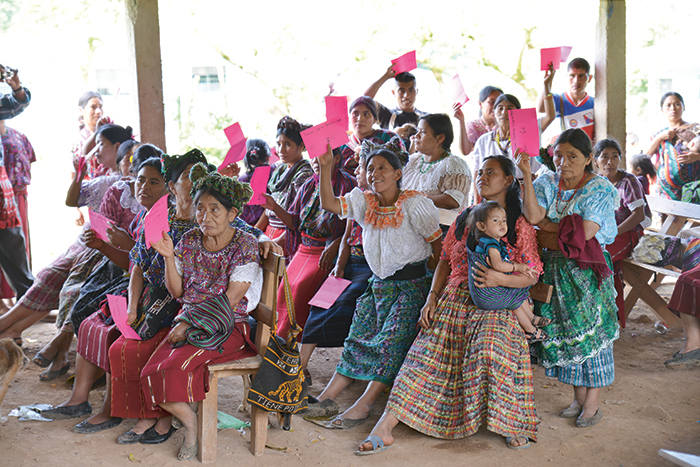 NCA started to work in Guatemala after the earthquake in 1976. This long-term presence and faith-based identity has enabled NCA to work with indigenous communities and support them in claiming their rights. NCA has managed to mainstream gender and secure a focus on women’s rights in all projects and with all partners.

One major result is that more than 1,700 women, most of them indigenous, now participate actively in 24 municipalities in Guatemala. This has increased their direct involvement in decision-making processes both at local as well as national level. These processes of capacity building have led to important advocacy actions and results, including the allocation of funds for three indigenous municipalities to initiate concrete projects, planned and negotiated by women, and the creation of a municipal board of women in three municipalities.

NCA’s strong focus on women’s rights has transformed power relations within partners’ structures and led to more inclusive and sustainable projects. By bringing on board women’s organisations’ conceptual awareness, the majority of the partners in Guatemala have developed gender policies. Furthermore, in 2013, the ACT National Forum in Guatemala launched the report Gynocide against indigenous women. The report demonstrates how indigenous women are exposed to different types of violence and explains how the combination of conditions severely affects the lives of indigenous women and girls. The report has helped NCA understand better the context in which it operates in relation to the challenges and obstacles of indigenous women.

NCA has also secured indigenous people clean energy access. Community managed micro-hydropower plants6 have been a welcomed energy source alternative in a context where large hydropower projects have resulted in severe conflicts between indigenous peoples and the energy industry. The piloted communitybased micro-hydropower plants have become pockets of participatory local governance, while also fulfilling the right to energy, providing basis for income generation and securing self-determination and the responsible use of natural resources.