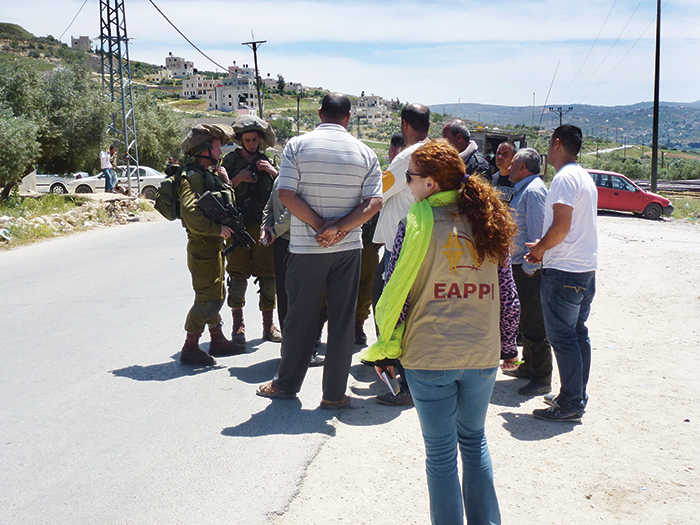 NCA accompanies churches and partners in Israel and Palestine who speak out against political and religious extremism and violations of human rights and humanitarian law. NCA also aims to strengthen the understanding of the conflict among decision-makers, the general public, and particularly among Norwegian congregations.

5The Church of Norway (Council on Ecumenical and International Relations), the Christian Council of Norway and YMCA-YWCA Global.

NCA and ecumenical partners5 have jointly supported the World Council of Churches’ Ecumenical Accompaniment Programme in Palestine and Israel (EAPPI), founded in 2002 upon a request by church leaders in Jerusalem for an international protective presence and advocacy towards an end to the Israeli occupation. NCA coordinates the Norwegian contribution and is responsible for recruitment, training, deployment and follow-up of 16 Ecumenical Accompaniers (EAs) annually. A total of 60 Norwegians have volunteered as EAs during the reporting period, together with EAs from 23 other countries.

The accompaniers have provided protection to Palestinian communities on the West Bank, who are vulnerable to settler communities’ violence and military harassment. The programme has provided a systematic documentation of incidents of settler and military violence, house demolitions, land confiscations, army incursions and child arrests. 473 incident reports were submitted in 2014 alone, and these reports are increasingly being used as references by The UN Office for the Coordination of Humanitarian Affairs (OCHA), The Office of the United Nations High Commissioner for Human Rights (OHCHR) and other agencies. Accompaniers also monitored school children and teachers’ safe access to schools across the West Bank. A headmaster expressed the following about EAPPI’s impact on the situation: “When Israeli soldiers and settlers come into the school, students are afraid to come to school the next day. They express their fear in their artwork; drawing pictures of soldiers shooting guns. When EAPPI is here, soldiers and settlers don’t come. We hope you continue to come here.”

Another important task for the accompaniers has been to receive and guide government officials and representatives from churches and religious communities visiting the West Bank. NCA has facilitated many such visits during this period. Upon their return to Norway, the accompaniers have shared their eyewitness accounts with a diverse group of audiences including decision-makers in Norway, congregations in the Church of Norway and various religious communities, thereby contributing to raising Norwegian’s awareness about the complex situation in Palestine.

As NCA’s role has partially been to communicate testimonies of the situation on the ground to Norwegian congregations, collaboration with Palestinian, Israeli and international actors has proved to be strategically noteworthy.