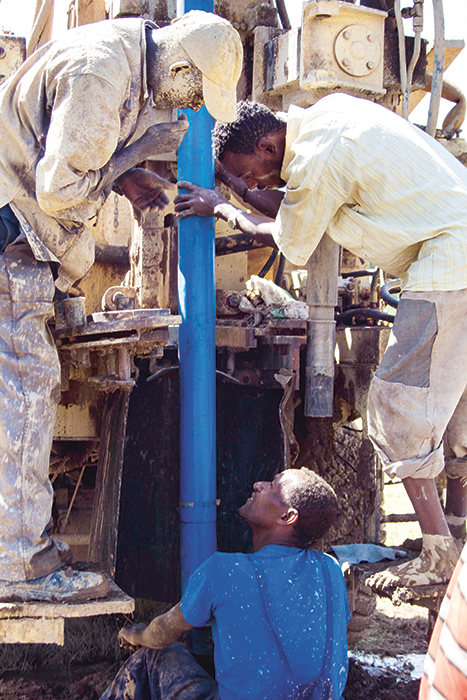 The strategic priorities are broad ambitions meant to give direction to NCA’s work. InNCA’s international programmes, these strategic directions were further developedinto 12 concrete global programmes. The concept of global programme was introducedto increase programme quality and ultimately achieve better results for therights-holders. Moreover, global programmes were believed to contribute to improveddocumentation and reporting on results at country and global levels.

Each global programme was comprised of the respective programmes at country level. As a key approach to strengthen the quality of the global programmes, each country was asked to select a maximum of three strategic priorities and five global programmes. This thematic concentration was meant to facilitate a more targeted advancement of skills and competency of NCA staff and improve the quality of the accompaniment they provide to local partners – both when it comes to development of quality programmes and in tracking and reporting on results. Communities of Practice (CoPs) consisting of country office programme staff and head office thematic advisors were established as a tool for programme development under each strategic priority.

5.1 THE RIGHT TO PEACE AND SECURITY

In 2011, NCA worked in a number of conflict areas in various parts of the world. NCA witnessed a high number of civilian casualties from violent conflict and saw how occasional and continuous waves of violence affected people’s general security situation. This led to a number of adverse consequences, such as internal displacement, increased GBV, reduced mobility and participation and more limited possibility to sustain or improve livelihoods. In NCA’s project areas we observed how these consequences of conflict varied according to both gender and age, and in some settings, we saw that religion was used to mobilise for violence. NCA acknowledged that in order to have an impact on people’s security situation there is a need to address conflicts at both local and national levels. NCA identified three global programmes addressing the right to peace and security:

The Women, Peace and Security programme has focused on the three pillars of UN security resolution 1325 and the follow-up resolutions: Prevention and protection from violence against women in conflict settings and participation of women in peacebuilding. Community Violence and Small Arms Control has had a particular focus on local conflicts and on the role of youth in conflict – both as potential members of armed groups and as potential agents for change. Finally, the programme for Faith Communities and Peacebuilding has had a particular focus on the role of religious leaders and faith actors in preventing and transforming conflicts at different levels, with an emphasis on interfaith dialogue and structures for joint action. Improving the effectiveness of peacebuilding interventions has been a cross-cutting concern in the three programmes, addressed through applying the “Reflecting on Peace Practice” framework16, which has led to an increased use of systematic conflict analyses as a basis for designing NCA’s peacebuilding efforts.

Each programme has maintained its distinct profile and important results have been achieved in all three programmes. However, there has also been some overlap between the programmes, both when it comes to promotion of women’s participation and efforts to establish and strengthen local and national structures for peacebuilding.

There has also been overlap between the Right to Peace and Security programmes and other NCA global programmes, particularly those of Economic Justice and Gender Justice. The focus on faith-based actors has been cross-cutting in the Right to Peace and Security programmes. This represents a strategic choice for NCA, and compels an even stronger focus on developing faith-based approaches to peacebuilding. To address these concerns, in the next strategic period NCA has therefore decided to channel all our peacebuilding efforts into one programme with a more pronounced attention towards faith actors in peacebuilding and towards women’s participation in peacebuilding.

Gender discrimination, violence and the exclusion of women from decision-making positions are among the primary barriers to gender equality. Violence against girls and women is often overlooked and condoned because of gender inequality and power relations. Women are not only underrepresented in arenas where decisions are made that affect their lives, but they also lack access to economic resources to live a dignified life. NCA identified two global programmes addressing gender justice:

The GBV programme focused on “breaking the silence” to end stigmatisation and discrimination of GBV survivors by offering them safety and justice. Various strategies were applied to promote a zero tolerance policy towards harmful practices, like female genital mutilation (FGM), child and forced marriage, sexual violence and trafficking. The Women in Governance programme focused on promoting women as active citizens, mentoring of women to become leaders, promoting women as candidates in local elections and advocating for affirmative action and quotas for women. These strategies were also applied in faith-based institutions, where NCA has seen changes as a result. NCA’s partners have confronted their own, often patriarchal structures, social norms and harmful practices. This has created new opportunities for girls and women, and engaged men, including religious and community leaders, to be positive masculine role models. Innovative approaches have been applied to foster dialogue at community level between various stakeholders to identify harmful practices and jointly commit to ending these. Both programmes have contributed to an expansion in knowledge and strengthened advocacy for the importance of enforcement of existing legislation and passing new laws to uphold the rights of women and girls.

Promoting women’s rights and gender equality was a focus area for almost all NCA country programmes, which is in line with NCA’s gender policy principles20.

More than a billion people continue to live in extreme poverty. The unequal distribution of wealth and power within both poor and middle-income countries, as well as between countries, remains a major challenge. For NCA, economic justice means to change the fact that the world’s economic resources flow from poor to rich countries. It also means advocating for a distribution of the earth’s resources in a way that eradicates poverty, reduces negative effects of economic growth and enables economic opportunities and sustainable livelihoods for all.

NCA aims to increase the capacity of developing countries to address poverty and inequality and make institutions at all levels accountable to poor and marginalised groups through our two programmes:

With the overwhelming evidence of the negative impacts of climate change and the lack of progress towards an effective global agreement on mitigation (especially with the failure of COP 15 in Copenhagen in 2009) as a backdrop, NCA identified two global programmes addressing climate justice:

It was clear to NCA that while it was crucial to address the causes of climate change and its effects through global advocacy work and mitigation of greenhouse gases through renewable energy programmes, it was equally important and urgent to work with vulnerable communities to strengthen their adaptive capacities to protect lives and secure livelihoods. The focus in this period has been to promote rural electrification through sustainable energy alternatives, global advocacy on climate change mitigation, increased community resilience, and measures designed to reduce the vulnerability of poor communities to the hazards of natural disasters (Disaster Risk Reduction). Globally, we see that Southeast Asia has improved on rankings of climate vulnerability due to the focus on disaster risk reduction and management, compared to for instance African countries.

5.5 THE RIGHT TO WATER AND HEALTH

Access to Quality Health Care and HIV and AIDS

Advances in medicine and public health, improved use of family planning practices and increased school enrolment and literacy rates have contributed to the reduction in maternal and child mortality throughout most of the world. Every year, however, 6.6 million children under the age of five die from largely preventable diseases and 289,000 mothers die from complications from delivery42. Compounding this is a scarcity of trained health care workers - worldwide there is an unmet need for an estimated 4.3 million doctors and nurses43.

African countries suffer the highest rate of preventable diseases in the world, yet African governments on average spend only 1% of their national budget on health44. Access to health care is, among other things, an issue of governance and economic justice. A sustainable health care delivery system was lacking in the seven countries where NCA implemented the Right to Health strategic priority.

Despite the global decline in new HIV infections since 2001, HIV and AIDS remains one of the leading causes of disease and death, particularly in Sub-Saharan Africa45. Stigma and discrimination against people living with and affected by HIV and AIDS persist. To address these issues, NCA has implemented its global programme Social Mitigation of HIV and AIDS in seven countries with the aim of addressing these issues and thereby contribute to reducing stigma and discrimination.

NCA implemented its Access to Quality Health Care programmes in many different settings, from conflict and post-conflict countries such as South Sudan, Sudan and Myanmar to countries with weak health systems like Malawi, Vietnam, Zambia and Palestine.

NCA’s water, sanitation and hygiene (WASH) programme filled the gap where governments were unable or unwilling to fulfil this human right. NCA provided WASH services in conflict or post-conflict countries such as Afghanistan, Sudan, DRC and Somalia; in post-natural disaster countries like Haiti and Pakistan; and in countries where there is a gap between political will and the government’s capacity to meet the needs of the population, such as in Ethiopia and Burundi.