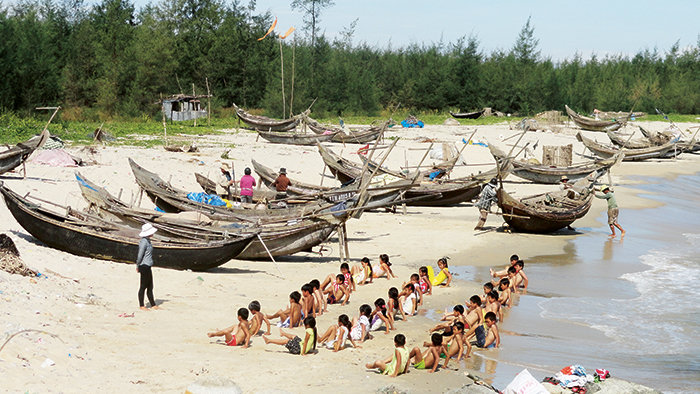 Overall goal: Reduction of the vulnerability to climate change of poor and marginalised people and communities

At the end of 2014, NCA sees a clear reduction in vulnerability of the majority of communities the organisation has worked with. NCA and partners have directly contributed to reducing the vulnerability of about 350,000 people. In several cases the mechanisms and techniques applied have already been put to test (with positive results) through community responses to flooding and drought.

Civil society actors, and particularly local faith communities, are almost always the first responders to emergencies as they are already present in the affected areas. For NCA, a particularly important part of the climate change adaptation programme has therefore been to strengthen these actors on prevention and response. The functions of FBO networks and local faith communities are acknowledged by The United Nations Office for Disaster Risk Reduction (UNISDR). An NCA led ACT Alliance delegation to Geneva ensured that FBOs were invited to take part in the discussions on stakeholder roles in the zero draft preparatory meetings for the (2015-2030) Sendai Framework of Action.

In the first 24 to 96 hours after the onset of an emergency, access can be difficult or physically impossible for humanitarian workers, in particular to remote areas or in contexts of weak, fragile and dysfunctional states. FBOs are anchored within these local communities and apply their unique strengths such as compassion, care and shared faith to facilitate resilience and respond to disasters. As an example, NCA’s partner Lutheran Foundation of Diakonia (FLD) in Brazil has several times provided basic food items and psychosocial support during floods and is always the first to respond.

Disaster risk mitigation strategies such as early warning systems use loudspeakers of mosques in Pakistan and Bangladesh. Churches and temples are also often used for warning about risk, and NCA’s Buddhist partners in Vietnam use pagodas to host community disaster planning and for shelters for displaced in emergencies.

FBOs and local faith communities, with their extensive mobilising capacity and far reaching networks, are also uniquely placed both to build the capacity of local committees and other civil society actors and to mobilise when there is a need. When their capacity is strengthened through cooperation with NCA and other NGOs, local faith communities, with their social assets and human resources make them natural agents for action. The capacity of these networks can be exemplified from Bangladesh partner RDRS who managed in cooperation with the local informal authorities to provide 134 training sessions on climate change adaptation in one year alone. The mere size of the networks makes them unbeatable with regards to dissemination of knowledge. NCA has trained and certified staff in disaster risk management38 so they can disseminate their knowledge and take a coordinating role in mobilising local faith communities.

WHY: Farmers struggling to make a living from a degraded natural environment affected by climate change.

WHAT: Vegetation and soil conservation, replenishment of groundwater resources, small-scale irrigation schemes and diversification of livelihoods.

RESULTS: By introducing improved watershed management, the programme has improved food security for 46,427 people and enhanced their resilience against the consequences of floods and droughts.

A main goal for the Ethiopian government’s Growth and Transformation Plan is improved food security.

In line with this, NCA, local partners and the communities themselves have rehabilitated ten environmentally degraded watersheds. In total nearly 11,000 hectares or 110 km2 of land have been reclaimed through introduction of improved soil conservation techniques. This has helped regenerate vegetation, which has resulted in reduced soil erosion and increased agricultural productivity. Wells and springs, which previously were dry or functioning only parts of the year, are now providing water for irrigation for 8,179 people. Also land destroyed by large gullies have been reclaimed, and is now fertile farm land for vegetables, fruits and multipurpose trees.

Altogether 631 households headed by women and landless youth have been organised in savings and loan groups (SACOs). These have received technical support to establish functional governing structures and bylaws, and their members have been assisted financially and technically with start-up or expansion of agricultural activities. On average members have increased their annual incomes with ETB 7,325 (USD 366). Other positive results include improvements of housing, increased school enrolment and better family health through diversified diets. The establishment and strengthening of watershed development committees and self-help groups have been a key for mobilising community members for rehabilitation and future protection of the common watershed natural resources.

The results framework of the global climate change adaptation programme has worked well, and despite some countries phasing out their dedicated climate programme in the next strategy, the lessons learned from these have informed other countries’ programmes.

Some lessons learned over the period include:

OUTCOME 1: Rights-holders are mobilised to manage adaptation and disaster risk reduction initiatives in their own community

In Vietnam, Myanmar, Laos, Ethiopia, South Africa, Tanzania, Haiti and Cuba NCA and partners have mobilised communities and rights-holders so they have the capability to counteract climate change and natural disasters.

In Brazil, Mali, Vietnam, Bangladesh, Ethiopia and Kenya the number of rights-holders reducing their vulnerability to climate change reached 90,000. The Zambia programme did not achieve this outcome.

OUTCOME 3: Duty-bearers include CCA and DRR measures in budgets and policies

Successful advocacy integrated in programme design by both partners and NCA in Brazil, Bangladesh, Zambia, Vietnam, and Kenya have led to the integration of climate smart applications in federal development reforms. Vietnam and Haiti did not achieve this outcome.

In Ethiopia, Mali, Zambia, Kenya and Laos communities that are food secure have started with value addition of produce and provision of market price data.

Guatemala, Vietnam, Haiti, Myanmar, Bangladesh and Cuba have integrated disaster risk management in programmes and are able to respond to natural disasters. Kenya and Zambia reached the stage of mapping risk but with no disaster mitigation measures in place.