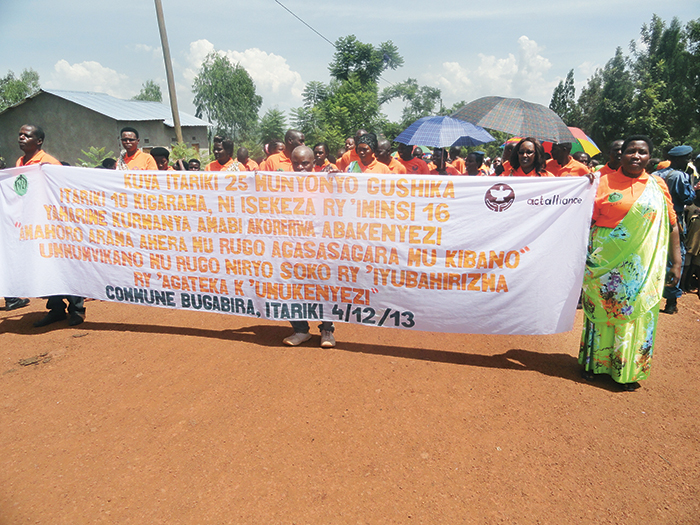 17 According to ACT Humanitarian Policy, protection activities can be responsive, remedial or environment building. Responsive action is immediate action to stop or prevent abuse or its recurrence and/ or alleviating immediate effects. Remedial action is assisting people to recover from the effects of abuse and avoid secondary abuses.

Overall goal: Women and girls are protected against17 gender-based violence (GBV) in conflict situations, and participate actively in peacebuilding initiatives.

NCA has provided direct support to almost 4,000 GBV survivors, and contributed to increased participation by women in local level peacebuilding in target areas. The majority of the survivors accessing support report feeling safer in their home or more able to deal with trauma as a result of the support.

In all of NCA’s work related to women’s rights, associations at the grassroots play an important role. They contribute to changing social norms and perceptions of gender and are instrumental in providing support for vulnerable women and survivors of GBV. NCA’s work in Burundi exemplifies how working with these actors not only leads to short-term results, but also has a longlasting impact even after NCA phases out its support: In the Buganda municipality of Cibitoke province, NCA and a local partner trained and supported 24 women and 12 men in 12 GBV committees up to 2012. From then on, the local GBV committees have built a strong network combating GBV in the province. The network includes the social advisor of the administrator of the Buganda municipality, a judiciary police officer, a psychosocial assistant from the Ministry of Human Rights and Gender, the president of the Buganda court of appeal and the chief of a police post.

When NCA started its work in Buganda, a municipality with more than 90,000 inhabitants, women were expected to endure household hardships and not complain even if her partner was violent. It was also common for women and men to live together in unregistered partnerships. However, unmarried women have very few rights under Burundian law. They do not have any right to own property or gain inheritance. If they get separated, they do not receive any compensation or financial support. Today in Buganda, unregistered partnerships are no longer common, and women are no longer expected to accept domestic violence. The GBV committees have played an important role in achieving this through a combination of sensitisation and grassroots dialogue and networking with authorities.

WHY: Mental health care services for survivors of GBV in DRC are extremely limited, despite the great need.

RESULTS: Better access to quality mental health care for survivors of GBV in South Kivu province. This has also contributed to increased acceptance of mental illness by GBV survivors’ families and communities, which has been important in order to facilitate reintegration and combat stigma.

DRC has for several years been ridden by conflicts, and many people have endured GBV and other types of violations. Countless people have been deeply scarred psychologically. In South Kivu, one of the provinces most affected by conflict, both the understanding of mental health and the provision of services in this field were limited. In this context, NCA embarked on a two track mission: on the one hand, 2,541 survivors of GBV (women and girls) were offered direct support, including shelter, psychosocial support, vocational and literacy training, which has greatly facilitated their recovery and reintegration into local communities. On the other hand, in order to reach more people, NCA strengthened its collaboration with local health authorities, aiming to strengthen the public health system’s capacity to prevent and respond to mental health needs, with a particular focus on trauma as a result of sexual assault and other forms of physical violence.

NCA joined forces with South Kivu Provincial Health Inspection, Panzi Foundation DRC and the University of Michigan, and developed a protocol for psychosocial care for survivors of sexual violence as well as a curriculum to train health personnel on the subject. 901 health personnel were trained, one from each health centre of the 34 health zones in South Kivu, a province with a population of more than 4.5 million. A key element was to strengthen the capacity of the health personnel to recognise severe trauma, and refer these cases to a psychologist for further treatment. 16 psychologists were also trained. In addition, the health authority’s capacity has been strengthened, and in four health zones community health workers were trained, ensuring that there is competence to identify, treat and refer cases related to mental health. A recent evaluation shows that from not even being recognised as a category in the health reporting system, reporting of trauma is now taking place in 41% of the health zones in South Kivu. Almost half of the reported cases were referred for treatment. Furthermore, efforts by community health workers have led to an increased acceptance of mental illness by survivors’ families and communities, which has been important in order to be able to facilitate reintegration and combat stigma. In the continuation of the project the aim is to expand the training on mental health for both new and current health personnel and to carry out community sensitisation in all health zones in South Kivu.

The work under this programme was in Sudan limited by the strict civil society laws. In most other contexts the programme was largely implemented as planned, but efforts to increase women’s participation and influence were emphasised at local, rather than national level. Important results were achieved at local and provincial level, and a challenge for the coming period is to link these results closer to the national level processes.

The importance of men’s engagement in the struggle to protect women’s right to protection and participation was very clear in the various country programmes, and the emphasis on changing men’s perceptions about gender roles and relations will be continued. In the next strategy the programme will be split into two, with some components being included in the GBV programme and others under the peacebuilding programme. This will allow for more focused interventions, but will also require close coordination between the two programmes to ensure a holistic approach to the women, peace and security agenda.

Achieved in Afghanistan, while not fully achieved in Sudan and Somalia. NCA contributed to build women’s capacity to participate in peacebuilding processes in all contexts, but only in Afghanistan did this translate into systematic participation of women in peacebuilding, notably through 280 women participating in 9 district level women peace committees, and more than 1000 women participating in 105 community level peace committees (shuras).

Achieved in DRC and Burundi through a combination of support to women’s associations, literacy and numeracy training fused with civic empowerment, support to income generating activities and facilitation of dialogue with relevant authorities, mostly at local level. This empowerment has also led to concrete results, for example in Kirundo province, Burundi, where 46% of women interviewed now report that duty-bearers have taken action against GBV, an increase from 20% in mid 2013.

OUTCOME 3: Duty-bearers have been influenced to implement UNSCR 1325 and related resolutions

Achieved in DRC, Burundi, Somalia and Afghanistan, while not fully achieved in Sudan. In most countries results have been obtained through capacity building of authorities and security forces combined with support for dialogue, lobbying and public advocacy from rights-holders, faith-based actors and women’s organisations on the issues most relevant in the context at hand. The extent to which these efforts have contributed to actual improvements in the implementation of UNSCR 1325 and related resolutions varies, but there are several examples of increased participation of women at local level as a result of increased openness from duty-bearers.

Achieved in Somalia, where the protection environment for 17,580 women and 11,720 girls in IDP camps improved as a result of sensitisation, establishment of 88 community patrol groups and referral systems for GBV survivors, in combination with gender sensitive WASH interventions.

Achieved in DRC, Burundi and Somalia through a combination of direct support to GBV survivors (legal, medical, economic, psychosocial and/or shelter) and strengthening of the public health systems’ capacity to offer adequate services to this group. 80-90% of the almost 4,000 GBV survivors accessing direct support in Burundi and DRC report feeling safe in their home or better able to deal with trauma as a result of the support.