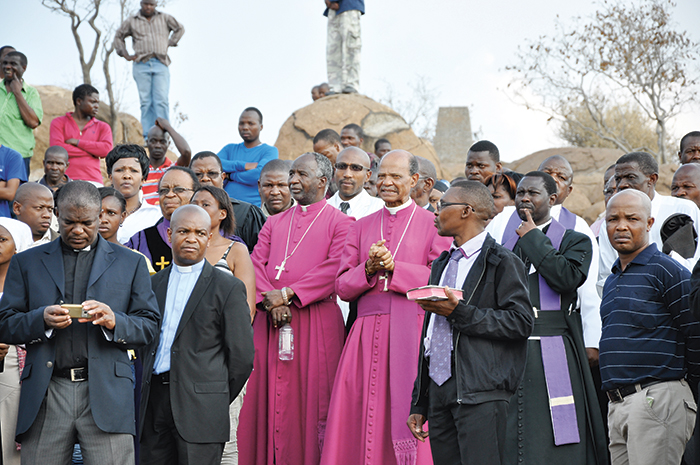 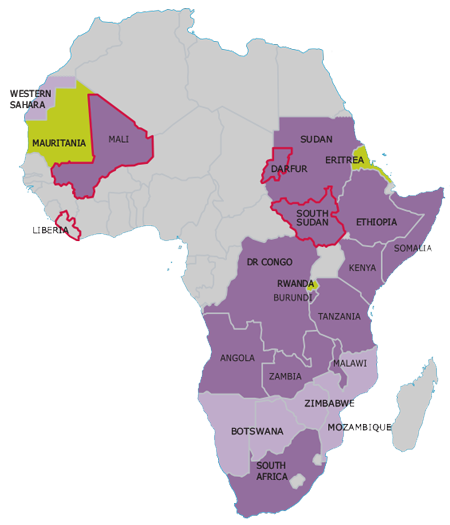 NCA has a long history in Africa, with more than 40 years’ presence in Sudan/South Sudan and Ethiopia, 30 years in Mali and more than 20 years’ presence in Somalia and Kenya. NCA, as the last international NGO, was ordered to leave Eritrea in 2012. NCA ended its work in Mauritania in 2012, and in parallel with the closure of the Rwanda office in 2012/13, the offices in Burundi and DRC were strengthened. In Zambia, the former NCA country programme has been fully merged with Christian Aid and DanChurchAid into a Joint Country Programme. In 2011, after the independence of South Sudan, the NCA country programme in Sudan was split into two; a Sudan and a South Sudan country programme.

NCA will phase out its Kenya country programme and significantly downscale its regional programme in Southern Africa during 2015-2016. Some limited regional activities will be kept also in East-Africa. 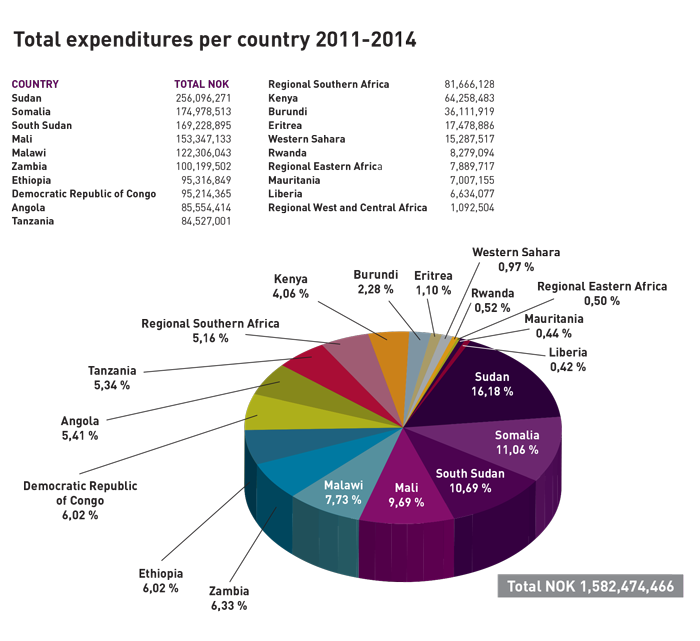 External factors that have impacted NCA’s priorities in Africa:

The African region has seen rapid economic growth while at the same time increasing insecurity and instability. As a consequence of the civil war that broke out in South Sudan in late 2013, NCA adjusted its programme to respond to the humanitarian crisis, while continuing rehabilitation and long-term development assistance. In northern Mali, after the coup d’état of the government by rebel groups in 2012, the situation has been volatile. NCA’s long-term partnerships with organisations rooted in local communities have made it possible to carry out humanitarian and long-term development work under challenging circumstances (see chapter 6.2). The situation in eastern Democratic Republic of the Congo (DRC) has seen continued instability with attacks on local populations by rebel groups, displacements of people and the government attempting to disarm and demobilise armed groups - which has led to increased tension. NCA has responded to the crises with water and hygiene activities in camps for internally displaced people (IDP) and host communities, and with concerted efforts against gender-based violence (GBV).

The trend of shrinking political space for civil society action has continued, with several countries in the region such as Ethiopia, Kenya, Angola and Zambia introducing new and restrictive legislations to regulate civil society. These policy changes challenge the independence of NGOs in these countries and provide challenges for the work of NCA and partners.

NCA has contributed to major achievements in African countries. Significant for these achievements in most contexts was NCA’s partnership with faith-based organisations (FBOs), as the examples from Ethiopia and Tanzania below show, and with locally rooted civil society organisations (CSOs), illustrated with the case from Somalia.

ASIA AND THE MIDDLE EAST 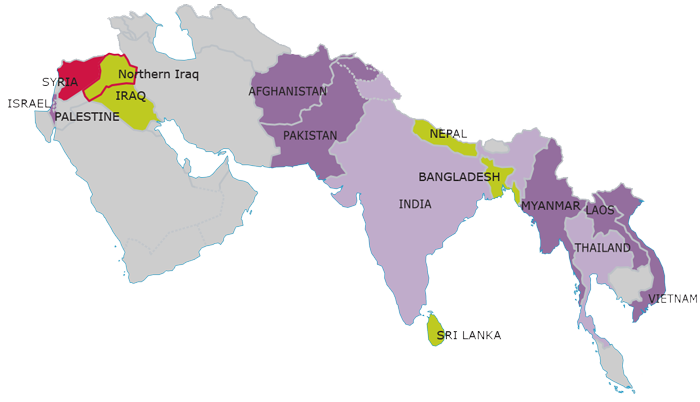 In the period 2011-2014, NCA had area offices for the Middle East in Jerusalem and for Laos, Thailand and Myanmar in Vientiane. A country representation for Myanmar was established in 2014. NCA also had country offices in Afghanistan, Pakistan and Vietnam and a sub office in Thailand. The projects implemented in India and the emergency responses in the Philippines in 2013-2014 were followed up from Oslo.

Partnerships in the Middle East date back to the 1950s, while NCA has been present in Afghanistan and Pakistan for more than 30 years and has carried out programmes in Southeast Asia since the early 1990s.

The following external factors have impacted NCA’s priorities in Asia and the Middle East:

A rapidly deteriorating political and security situation and corresponding increase in humanitarian needs in the Middle East and South Asia have challenged NCA’s programming and management. NCA has established a significant humanitarian response for Syria and Northern Iraq. In Afghanistan and Pakistan, NCA has increased its focus on mobilising religious actors for peace and tolerance for pluralism. Improvements in the political and conflict situation in Myanmar have opened up new opportunities for NCA and partners, including FBOs. Government restrictions on civil society in Laos have impacted negatively on NCA’s strategy for greater engagement with this sector, while in Vietnam the NCA office has been able to build a country programme focused on the mobilisation and capacity building of faith-based civil society actors, and with partner-based project implementation.

During the period 2011-2014, through close collaboration with partners in Asia and the Middle East, NCA has strengthened civil society, empowered marginal groups and responded to humanitarian needs. These achievements are illustrated by the two country cases from Afghanistan and Palestine below. 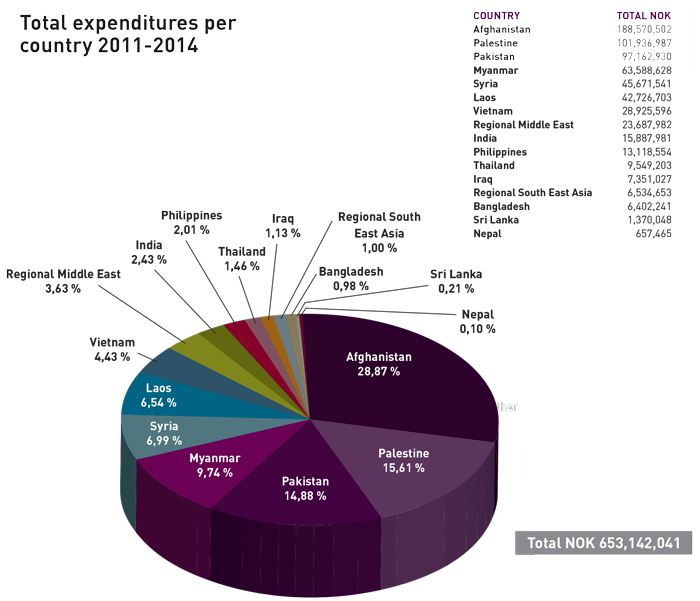 LATIN AMERICA AND THE CARIBBEAN 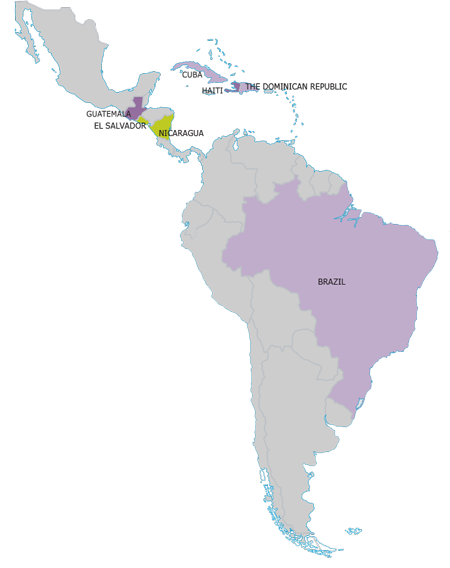 Between 2011-2014, NCA has been present in Latin America and the Caribbean through the country offices in Guatemala and Haiti. The Haiti office also managed the programmes in the Dominican Republic, and from 2014 took over the responsibility for partners in Cuba. NCA’s country programme in Brazil was followed up from Head Office. NCA phased out its programme in Nicaragua in 2012 and will phase out the Brazil programme in 2015/2016.

In the aftermath of the earthquake in Haiti in January 2010, NCA and partners assisted rights-holders with basic necessities, primarily water services. In parallel, we continued addressing the deeper structural issues keeping Haiti from advancing, such as community violence. These challenges were exacerbated after the natural disaster, making it more challenging to operate, but also more important to act.

NCA’s long-term presence, broad network and experience from working with binational questions put NCA in a good position to effectively respond together with partners to the increased tension between Haiti and the Dominican Republic and the deterioration in the human rights situation of Haitian migrants and their descendants. At the time of wiring this report, NCA is preparing to respond to the announced deportations of those who have not been granted citizenship or residence permit. 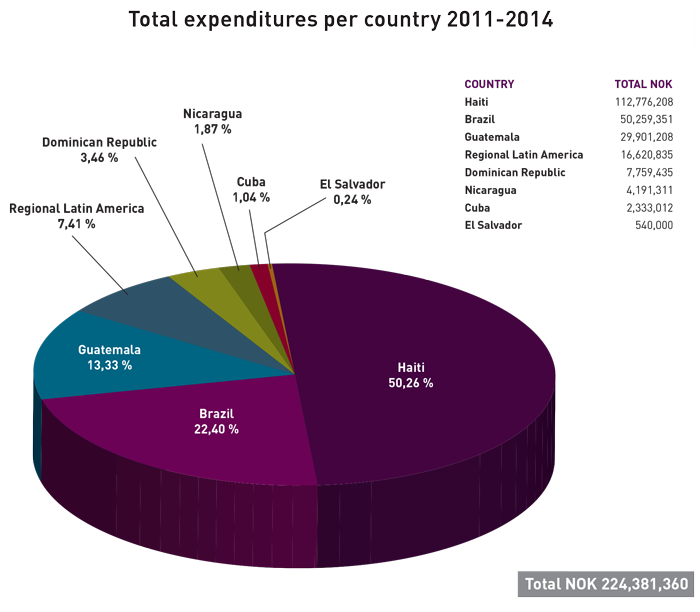 Between 2011 and 2014, NCA and partners have significantly strengthened the rights of vulnerable communities such as indigenous peoples in Guatemala and Brazil, illustrated by the following example from Guatemala. 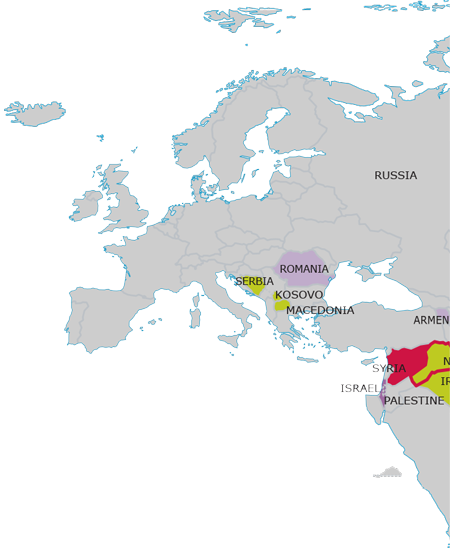 During this strategic period NCA was working in six European countries: Serbia, Kosovo and Macedonia, which were phased out between 2011 and 2013, and Armenia, Romania and Russia. NCA started working in Romania in 2013 and will end the work in Armenia in 2015.

NCA’s assistance to the Balkans dates back to the 1990s. NCA’s partners in the region are primarily churchbased organisations and NCA has played a considerable role in mobilising these faith actors for social change. During the past four years, NCA’s contribution to Serbian partners has been the most significant. NCA has empowered Roma communities, which gained sustainable livelihoods both in Serbia and Romania.

In Romania, NCA and its partner supported marginalised people, most of them Roma. This effort is still at inception stage, but results so far show improved health and access to social services, WASH facilities and improved access to education. In Armenia NCA’s partner has mobilised poor and marginalised communities to claim their rights to sustainable livelihoods. This has led to improved quality of life in the target communities.

The HIV and the GBV projects of the Russian Orthodox Church were initiated as a result of NCA’s encouragement and initial support. There has been a considerable change of mind-set within the church on HIV and AIDS since NCA started the support in 2001, which has contributed to reduced stigma for people living with HIV and AIDS. 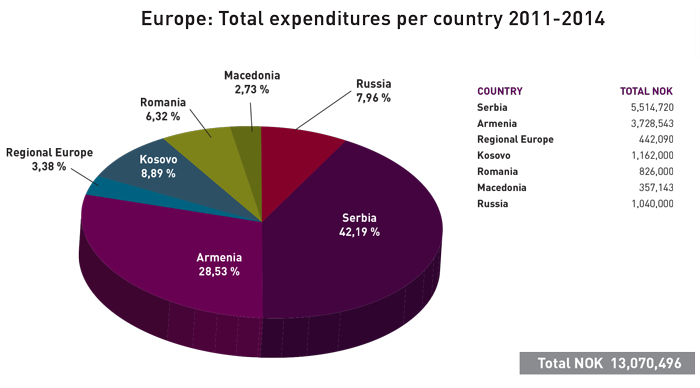 Humanitarian workers are increasingly facing a diminishing of the protection they have felt for a long time. Aid workers are not perceived as neutral and their work not always perceived as “good” anymore. Available statistics document an increasingly hostile environment for humanitarian aid workers. While this development is not reflective of every context; it is an indicator that safety and security must be given careful consideration. This development has influenced both the global humanitarian aid sector and NCA’s security risk management during the last four years.

NCA has been able to continue delivering aid in some of the most volatile contexts in the world despite the serious challenges related to the safety of the staff; including Afghanistan, Pakistan, DRC, Sudan, Syria, South Sudan and Somalia. One reason for the ability to stay is that NCA has worked to develop routines of security risk management at the country level and invested in mandatory security training for staff at all levels. Security management has been strengthened through added human and financial resources. NCA has identified security focal persons at every country office, mandated to ensure inclusion of security issues in daily management and procedures. A global security team ensures head office oversight and conducts security audits of the country offices.

Better trained staff and partners, with a shared focus and competency in managing the security risks has enabled NCA to conduct more field visits and on-site monitoring of programmes than would have been possible without this competence building.

All in all, NCA combines its Duty of Care (legal obligations) with a strong dedication to stay and deliver. NCA believes that through rigorous security management, sound contextual analysis and trained and securityaware staff, the organisation can stay longer in volatile contexts and further reach vulnerable groups.