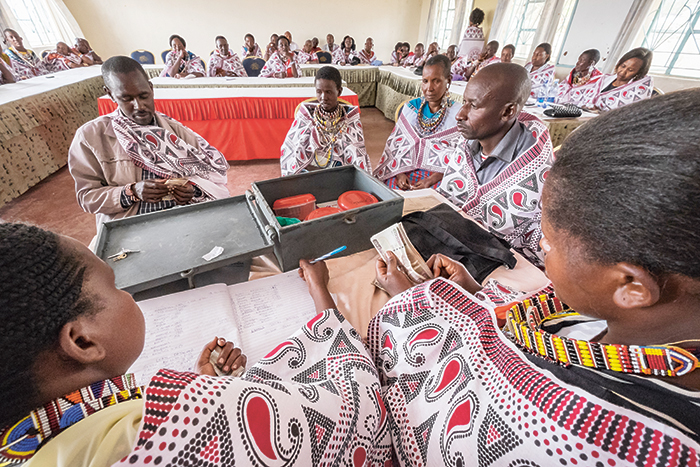 Almost 14,500 women have obtained decision-making positions in Government, local committees and church structures in many countries on all continents.

Strengthening of women led to increased participation in decision-making

Underrepresentation of women in decision-making fora represents a democratic weakness to the right to have one’s voice heard. The WIG programme contributed specifically to strengthen women as an essential part of civil society, by overcoming barriers to women’s participation and influence on decision-making in faith-based organisations, church bodies and in local governance structures. Women’s participation in governance increased in a number of FBOs and church councils through the use of the internal review tool gender audits. These reviews were used to develop gender policies and building leadership skills of women to become active citizens.

Successful strategies used were for example coaching women and young women in leadership skills, establishing women’s networks, promoting women as candidates in elections and making use of affirmative action

by setting quotas for women to promote gender parity. By making use of experiences from women’s organisations in how to build women’s leadership ability, FBOs were able to apply these methods in their own organisations. We see several results of these efforts, for example in Kenya and Zambia.

29 Local elections scheduled for 2012 were postponed due to the crisis and have not been organised yet.

In northern Mali, women’s representation in local committees in their communities increased from 601 in 2011 to 1,206 women in 2014. In the national elections in 2013 four women from northern Mali were elected to Parliament (before there was one), which is a remarkable achievement in this context29. Also in Zambia, Kenya, South Sudan and Guatemala, women were promoted as candidates and elected. This resulted in the councils setting new priorities as women responded proactively to concerns in the communities (like health, schools, water), and prioritised differently from what men had done. An evaluation from Zambia found that “Women councillors are more likely to serve the community than their male counterparts”, and that “Women’s participation improves the quality of local governance and increases accountability to communities.”30

Advocacy towards adoption and monitoring of laws and legislation for gender equality and gender parity was also a key strategy. As a result of the programme, some of the FBOs in Southern Africa became participants in the annual SADC Gender Summit tracking the implementation of the SADC Gender Protocol at national level. Having this role as a watch-dog, the Alliance used so called Citizen Score Cards and a specific Gender Progress Score when involving citizens to rate their governments’ performance towards the Protocol to measure accountability.

WHAT: NCA and partners have in the period 2012-2014 provided local representatives in Eastern Equatoria State, including future female leaders, with leadership skills.

31 Boma is lowest level of governance.

RESULTS: As a result of NCA and partners’ facilitation of leadership training for women and men, women succeeded to be elected as local councillors for Boma31 councils. (ref. chapter 5.1)

As a direct result of NCA and partners’ interventions, 71 South Sudanese women have obtained decisionmaking positions in local government. From no women in such positions previously, women now constitute 17% of the local councillors in the Bomas in the target area. In several districts women are not only represented in these councils, but are also actively participating in community meetings and court hearings. According to some of these women, the positions they have gained have been escape-routes from an imposed system where women’s concerns are not regarded as relevant.

The representatives were trained in how to advocate towards the government to fulfil their duties to deliver social services and elaborating action plans for development activities. Local communities gained knowledge about gender awareness and were encouraged to elect women for decision-making positions. In collaboration with the local government, female councillors were trained in accountable governance, gender dynamics and leadership.

The capacity building of female councillors has indisputably empowered and built their confidence. Women in leadership positions are role models for women in the communities, some of whom also gained confidence for active participation in lower level decision-making structures. Moreover, improved awareness on gender and power dynamics in the local communities helped to break cultural barriers on gender relations. Following NCA and partners’ interventions, there is evidence that South Sudanese men in target areas are beginning to value women’s participation in governance positions.

The seven country level WIG programmes have to a large extent been implemented according to the plans, but NCA had expected more countries to develop WIG programmes. The lack of women’s presence where decisions are made in church structures was raised as an issue of concern by many partners, and thus NCA expected their readiness to take on and develop this programme. As this also included addressing male dominated structures in church institutions, it might have been too challenging for some FBO partners. Resistance from some leaders towards female leadership also contributed to this. The gender audits of the church councils came out differently, some successful, others not. The programmes which succeeded were those that learned from CSO actors such as women’s organisations at national and local level, and applied methods and strategies used by them to promote women candidates and to build their leadership capacity.

Although the programme will discontinue in the next global strategy, increased participation of women in decision-making and empowerment of women as rights-holders will be highlighted in all future programmes. In conflict areas, promoting women’s participation in decision-making processes and as agents of change will continue to be of specific importance in NCA’s peacebuilding programme.

Several lessons learned from this programme bear importance for NCA’s continued effort on mainstreaming gender and lifting the role of women in peacebuilding. NCA has seen that even during times of armed conflict and natural disasters, it is possible to work for women’s participation. During the occupation of northern Mali in 2012, women organised and took a lead in life-saving measures and responded to the needs of the communities. Also in Guatemala there were similar experiences with indigenous women taking leadership in organising their own emergency preparedness committees to meet their needs, as well as becoming elected representatives in a number of municipalities.

NCA has seen that it is possible to engage FBOs and religious actors to work for women’s rights, not only within own institutions, but also through taking part in advocacy at national level, despite occasional resistance. Finally, NCA has over the last four years experienced that promoting women’s rights and agency is becoming more risky in many countries. Creating fora for dialogue and protecting women human rights defenders will be important also when working with women’s participation as a crosscutting concern.

In Mali, Guatemala, South Sudan and Zambia, NCA succeeded in increasing the number of women elected as local councillors, sometimes well over the estimated numbers planned. In Kenya, Angola and Zambia, women were for the first time elected to leadership positions in the churches, also becoming chair persons, as a direct result of the programme.

In Mali, Guatemala, Zambia, Kenya and South Sudan, NCA and partners influenced duty-bearers to respect women’s right to participate and become leaders in local governance structures. In Zambia, Kenya, South Africa and Angola church structures were influenced to accept and promote women’s participation. As a result of gender audits in churches in Southern Africa and Kenya, women and men accepted and saw the positive aspects of promoting women in leadership positions. Strategies applied to achieve this was reinterpreting theological dogma on women in leadership and enforcing the use of gender balance in national legislation and constitutions.

OUTCOME 3: Duty-bearers have been influenced to institutionalise the principle of gender balance and equity in governance structures

This has been achieved by most of the Women in Governance programmes. Making use of new national constitutions on gender balance and quota, like in Kenya, Angola and Zambia, the church councils were engaged to apply the same principles of gender parity, which resulted in increased numbers of female leaders and opened up for women to become head of church councils. In Mali, Guatemala and Zambia, female representation was increased in municipality councils and committees.

OUTCOME 4: Duty-bearers have been influenced to include international HR conventions on women’s rights in national laws and practices

In South Africa, Zambia and Kenya, FBOs joined ongoing advocacy efforts by CSOs to monitor and track the national level implementation of the SADC Gender Protocol. In Guatemala, partners advocated for a law on femicide and participated in CEDAW reporting. In Angola, the church council contributed to the revision of a law banning violence against women.

OUTCOME 5: Duty-bearers have been challenged to transform informal structures of power and/or patriarchy

All the seven country level WiG programmes contributed to important changes in attitudes and practices towards more equality between women and men; in family life, communities, churches and congregations. The programme addressed both formal and informal power structures and the linkages between them, which are not always easy to document. Except for South Sudan, all the programmes were combined with a GBV programme, which also focused on changing structures of power and/or patriarchy.

All programmes achieved results in empowering girls and women by creating networks and building associations. Some country programmes, such as Mali, applied specific mentoring programmes for women to build their capacities as leaders. Engaging young women into leadership positions on issues relevant to their lives proved to have impact for changing social norms in some projects addressing FGM, such as the “Uncut girls clubs” in Ethiopia.