A Story of Faith for Water

Bero village sits in contrasting landscapes of rugged hills and wide terraces, surrounded by steep escarpments in Minjar Shenkora District. Tin roofed houses follow patched plots of farmland that is hungry for the rainy season- ready to grow yet another round of seeds. Some kilo meters away from Bero village, Bisan Guracha, the only source of water lies at the bottom of a steep, trecherous gorge that can only be savored with the eyes. 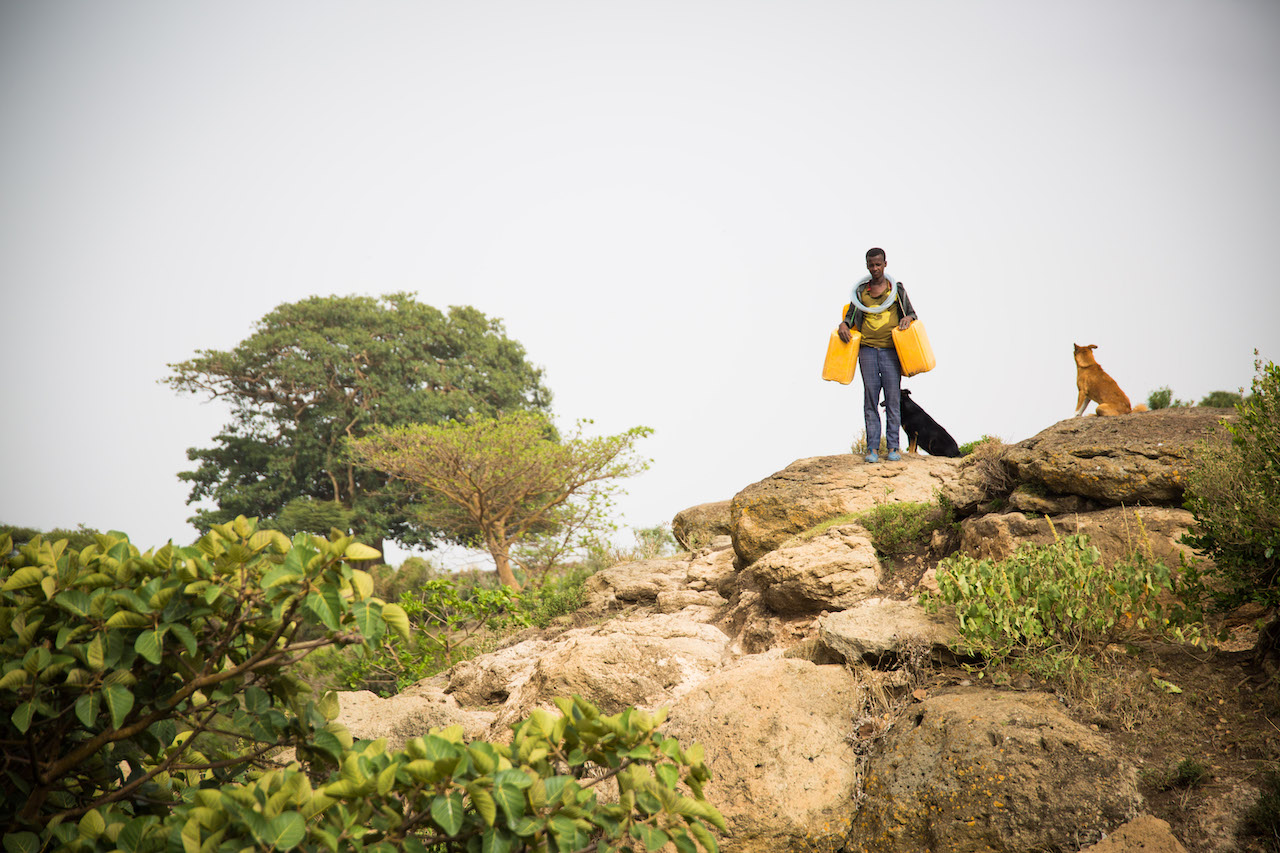 Up the cliff, more than three hundered households that make up the Bero community are waiting for what they hope to be true. A few weeks prior, a team of geologists and experts have been conducting studies to find a sign of water in a village that barely had the luck for one. Two attempts to drill a water well have already failed before. And so this time, they are hopeful but cautious.

Genene, one of the community members and the locality administrator, leads us into his home. Our presence seems to have confirmed yet another sign for what is to come. 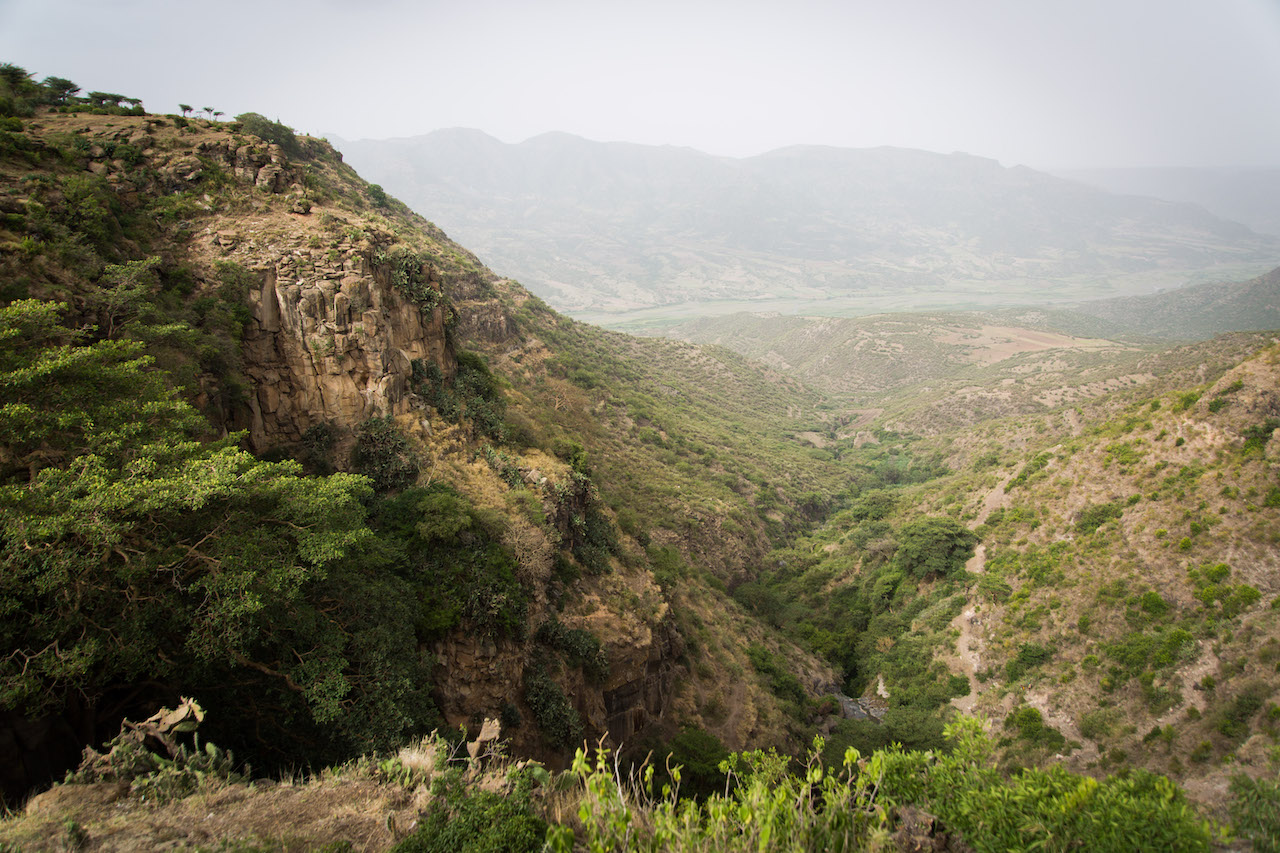 Bisan Guracha, where the Bero community collects water from lies at the bottom of this gorge.

His daughter, Tizita, 19, was born and raised in Bero. The eldest of five children, Tizita found her way to Bisan Guracha when she was only seven years old. As most girls her age do, she followed her neighbours and family members to the gorge as early as 5:00 am. The rocky steep path down the hill was no easy match for her small feet. Yet, she learned to carefully walk, gripping the big stones for saftey. After all, this is going to be one of her rountines in the years to come.

Navigating through the challenging path was not only trying for Tizita. It was also life threathening. A mis-step can lead to sliding and falling off. At times, it is the group of monkeys that were a considered a threat who attacked people. Other times, it was the possibility of men who waited in the shrubs to abduct young girls for marriage.

Tizita has not encountered any of these things. She recalls however falling once and sustaining minor injuries. Yet, few others were not so lucky.

«We lost a young boy a few years ago who died on the spot from injuries. Some of our camels and animals have also fell and died  because the path is steepy. Other people had broken their bones from falling», she says. 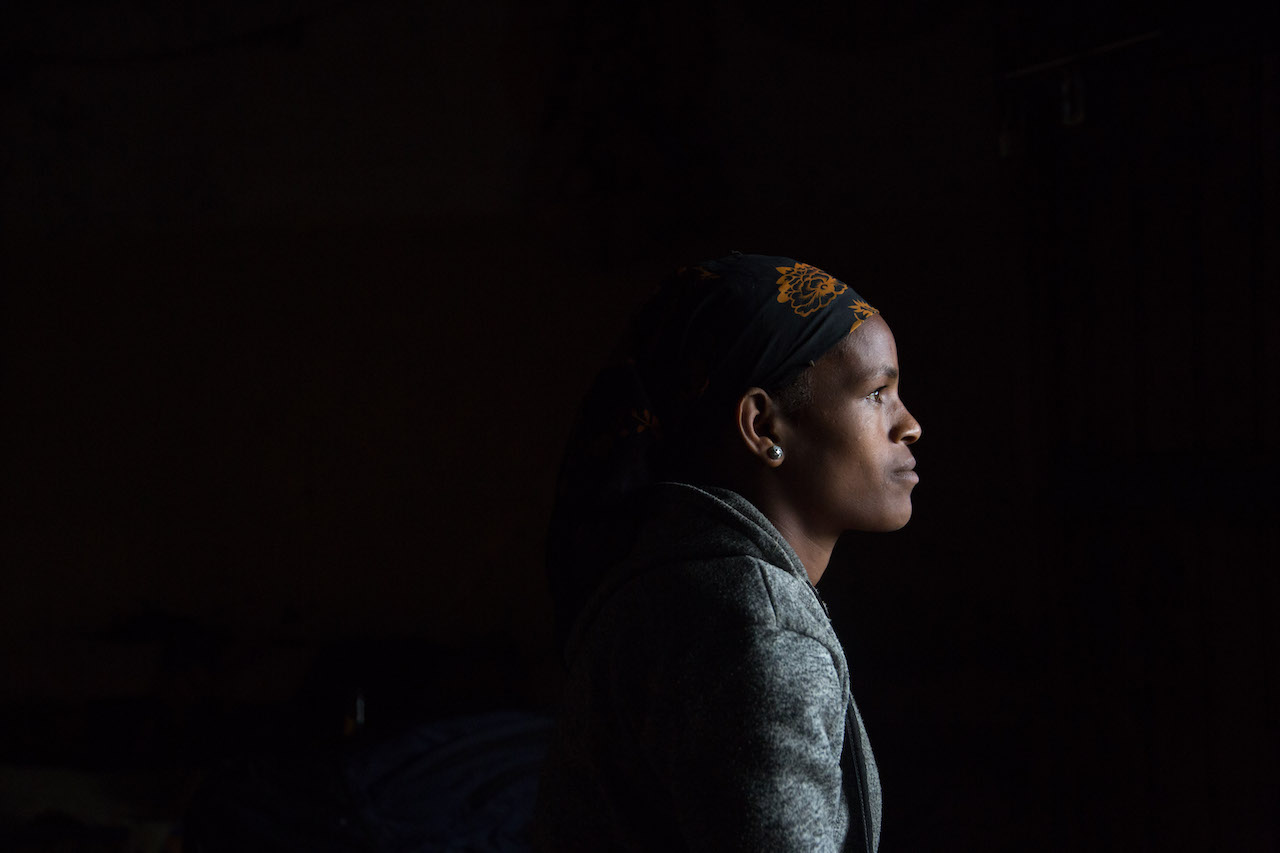 Tizita Genene, 19, sits for a portrait in her family home in Bero, Minjar.

Thirteen years later, Tizita still walks the same route to the water source. But this time, the Jerry cans were bigger. And like any other day, she makes her way across the fields with a jerry can at hand until she reaches the cliff and then the rocky path down the hill. Her steps, well trained and less cautious than they were before.

Some fourty minutes later, she finds a stream that slowly makes its’ way to the east. She places a rubber hose to direct water into her jerry cans. Once they are filled, she loads the jerry cans onto donkeys. They then make thier way back to a village through a different but longer route, as they will not be able to climb up the hill with a heavy load. This time, the walk back home takes more than two hours.

Hope in the Midst of Loss 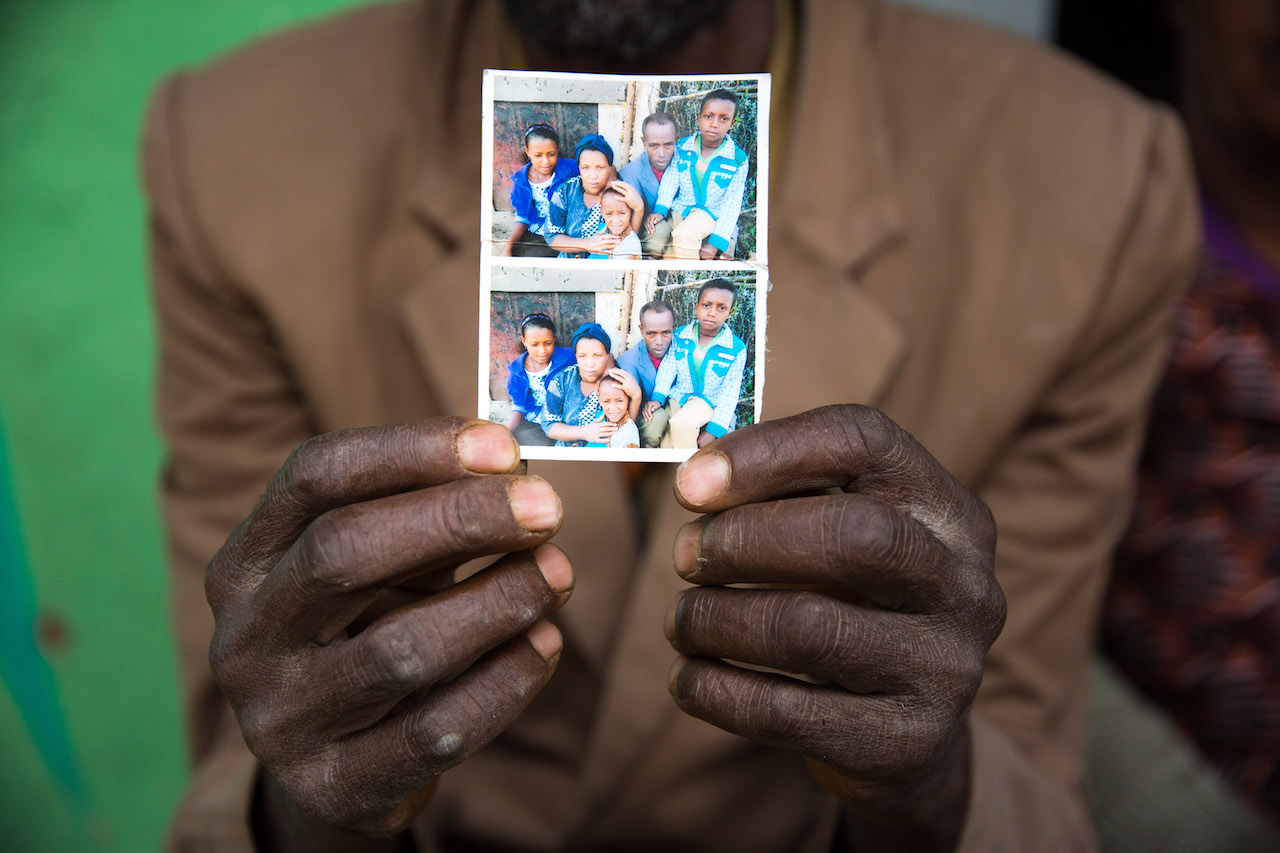 Gezahegn, 60 and his wife Tewabech, 40, still choke up when they recall an incident that left a mark on their lives. Their son Zeyede, left one day for Bisan Guracha to collect water. But he never returned home. What they heard later was a news they never  prepared for. They were told that Zeyede has died. He was killed by a sliding stone.

«We found his body near the stream. We later burried him at Bero’s Saint Michael Church», recalls Gezagegn, still clearly in pain.

After Zeyede’s death, Gezagegn desperately wanted to leave Bero but he couldn’t. He did not wish to see the same thing happen to the rest of his children. So he sent them away to live and study in another town.

«Here we are, still drinking from the same water», says Tewabech.

A dozen men from the community gather around a farmland, anticipating the arrival of a truck. Prior, some of them have been digging and correcting patches to make it easier for the heavy truck to go into the village. And unlike other times, they pray for the rain not to fall and result in sticky muds. Once the truck arrives, they coordinate themselves to unload heavy drilling equipments. The anticipation grows. Later that day, they gather around a shed to rest and discuss what will take place in the next few days. They divide roles amongst themselves. Some bring drinks, others food to eat to all who helped.

Community members lend a hand prior to the start of a drilling construction in Bero village.

As the sun ascends the next morning, priests from the Orthodox Church donning the clergical clothing and carrying the Cross stand for a prayer. But unlike other times, the prayer is conducted outside of the Church and out in the field. A day earlier, the village elders agreed that the enrite community in the village must make a pledge to God on their part. Women and men, young and old join in for a prayer. Behind them is the drilling truck and underneath, the spot where the findings indicate a potential for water. The mood is of both hope and anxiousness from the uncertainity that water can indeed be found. After a prayer is conducted, the priests make a blessing for the drilling to commence. The sound of a heavy metal is heard as it hits the ground. 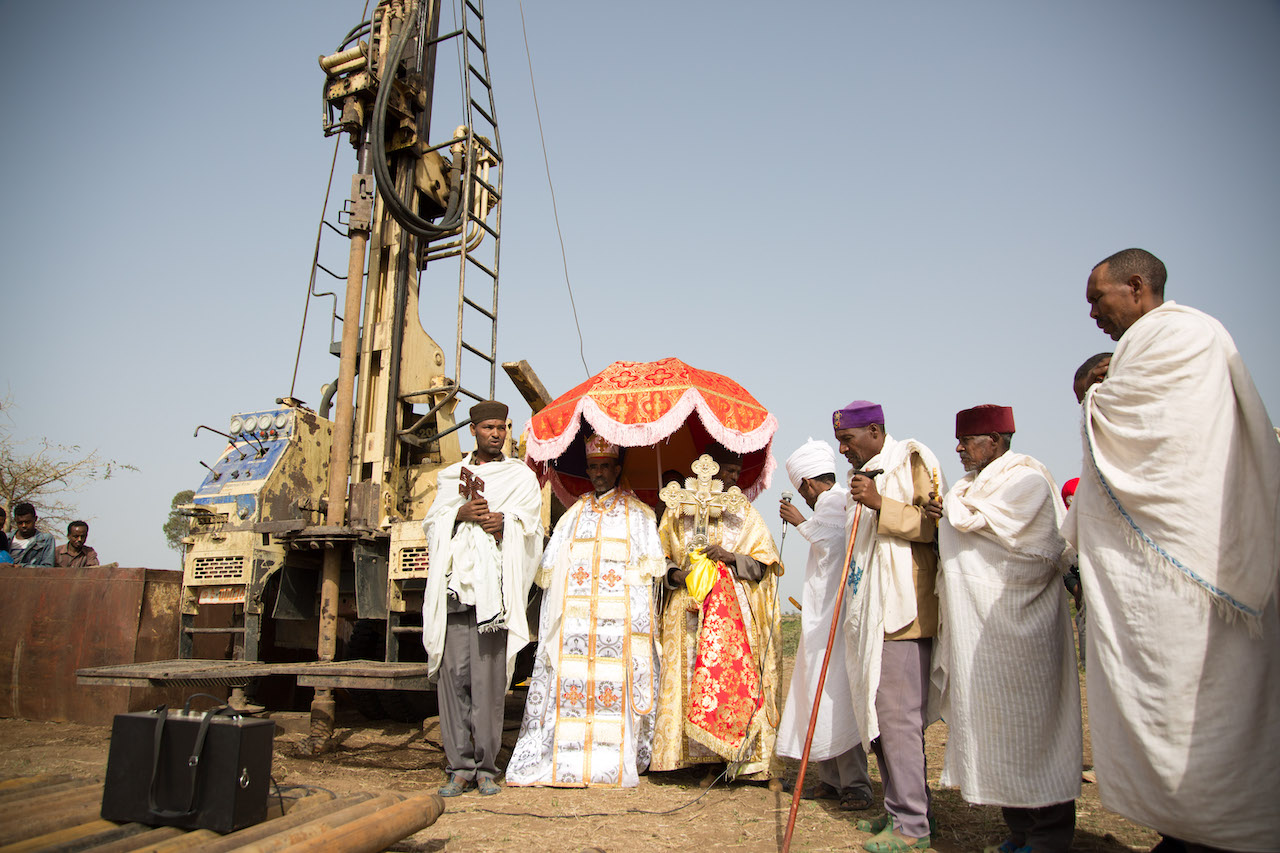 The clergy gather for a prayer. It will be the first time the community will receive clean water if the drilling is successful. 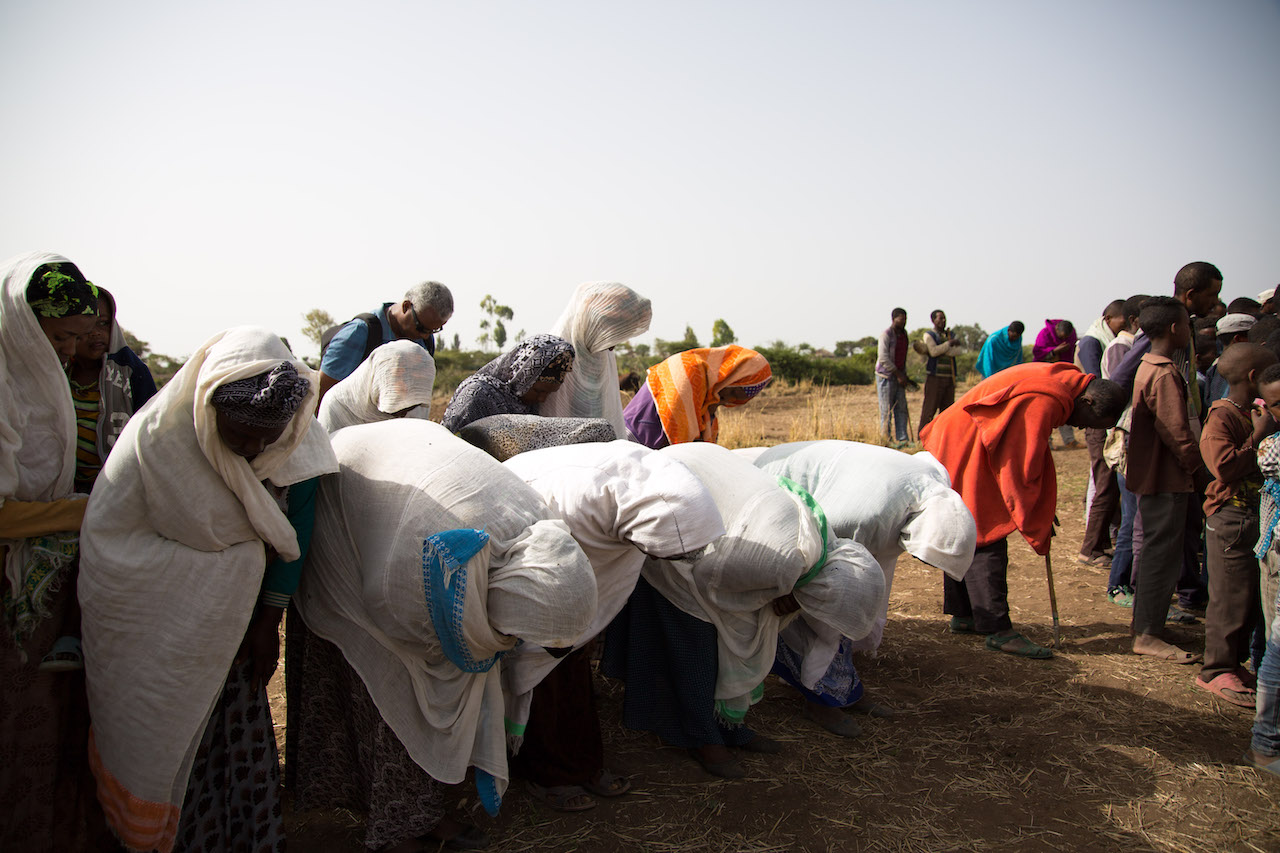 The community in Bero prays for water.

Among the crowd was Tadesse Ketema, a 36 year old farmer who earns a living from the small plot of land he inherited from his parents a few years ago. He grew wheat, «Teff» and onion. But this time, he skipped preparing the plot for the next harvest. When he heard that his plot has a possibility for finding water, he consented to give part of his farmland for the construction of the water well. 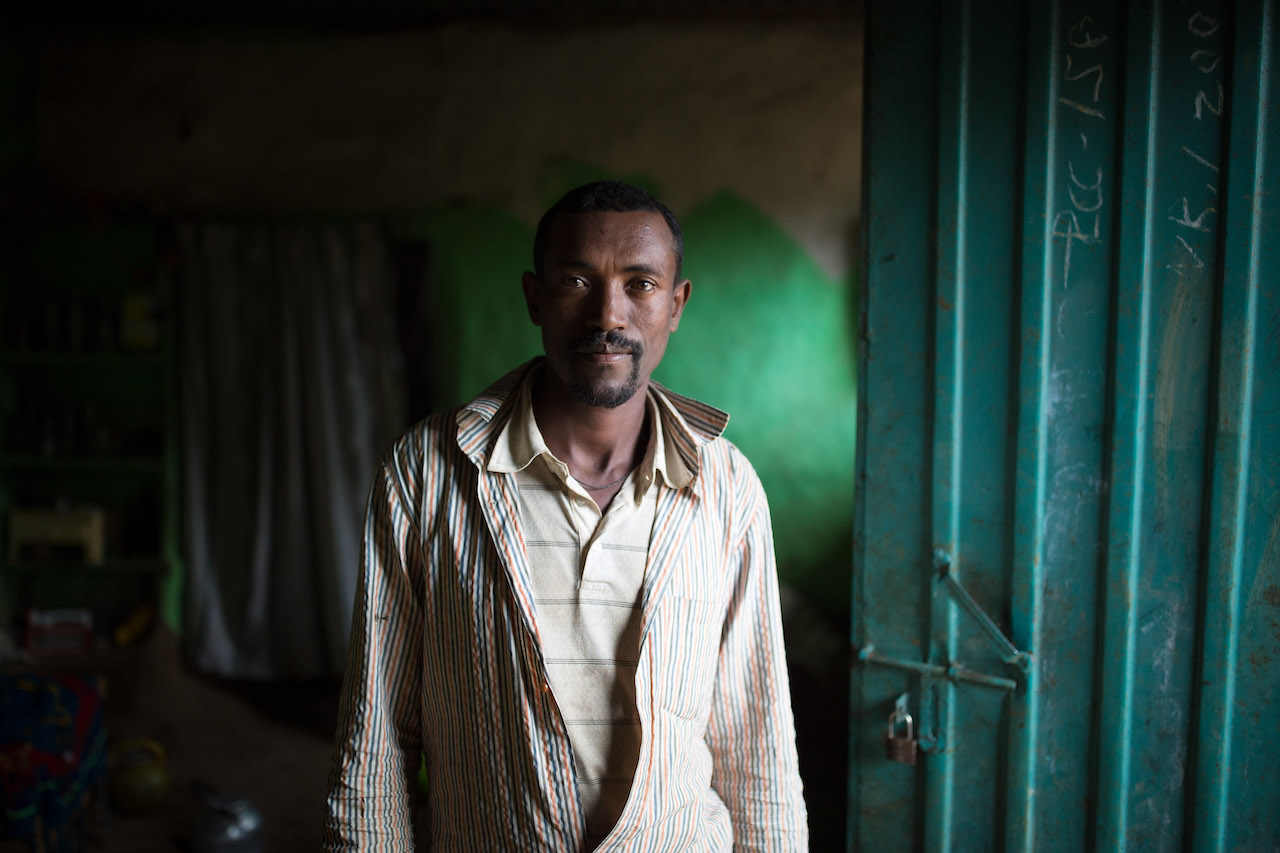 Tadesse Ketema, who gave part of his farmland for the well construction.

The water problem was personal to Tadesse. His 13 years old sister was abducted for marriage when she went to Bisan Guracha to collect water more than ten years ago. He recalls that he tried running after his sister’s abductors when he was told about what happened, but he couldn’t keep up. The abductors had already ran away with his sister. She was eventually married to her abductor but the marriage dissolved after some years.

Tadesse and his father, Ketema Gebre Mariam, 70, along with the members of the Bero community watch as the drilling team operates around the heavy machinery. It will take at least a day or two before they find out if there is indeed hope with the water. 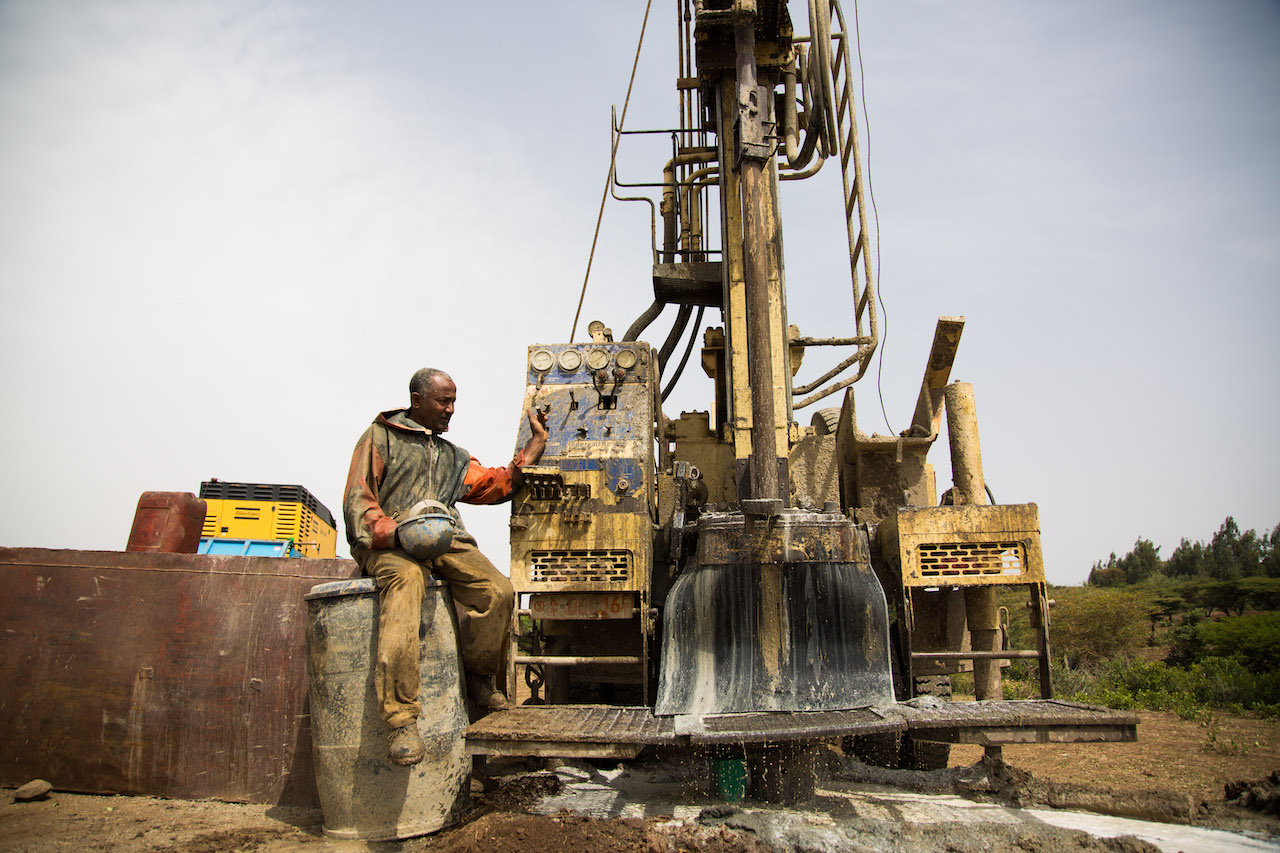 Kidane, Chief Driller operates on the drilling rig in Bero village. He has been doing this for 29 years.

“This is one of those cases where you cannot tell the community what to expect”, says Kidane, Chief Driller with NCA’s local partner EOC-DICAC. Unless he has to give command to his assistants, he quietly operates on the drilling rig. It is the morning of the second day of the drilling and the only thing that signals the contact of the drilling rod with the earth is a watery mud that splashes from time to time. Kidane is still anxious. He and his team were able to dig some 60 meters deep by the end of the second day. There is still some 20 meters to go. 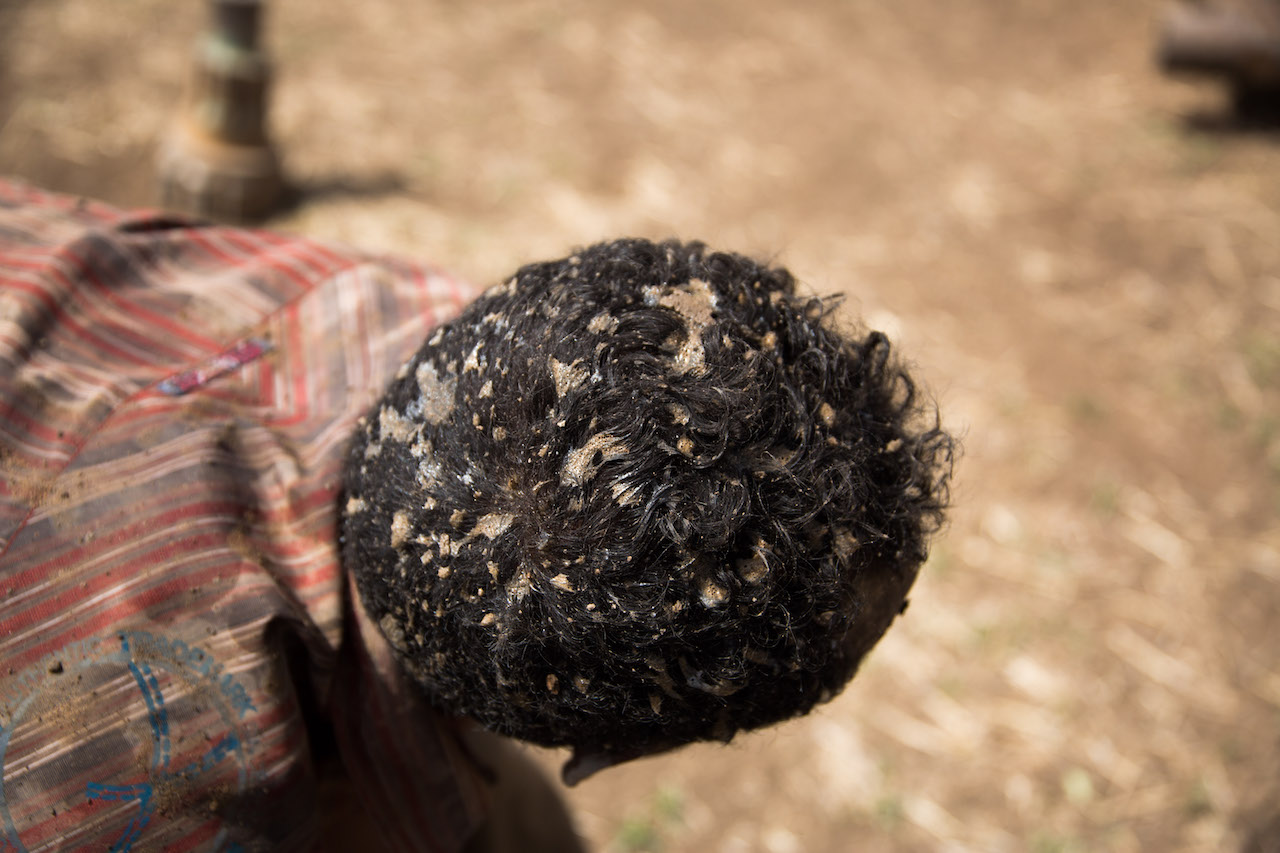 Kidane, and his assistants on the drilling rig in Bero village.

It’s almost 5:00pm on a Sunday afternoon and the third day of the drilling. People have still gathered around the rig. They patiently wait to see what will happen next. The rig makes a different sound as it accelerates its’ pressure. Suddenly, a water splashes towards the sky. A sign of life, and a moment everyone has been waiting for, probably all their lives. 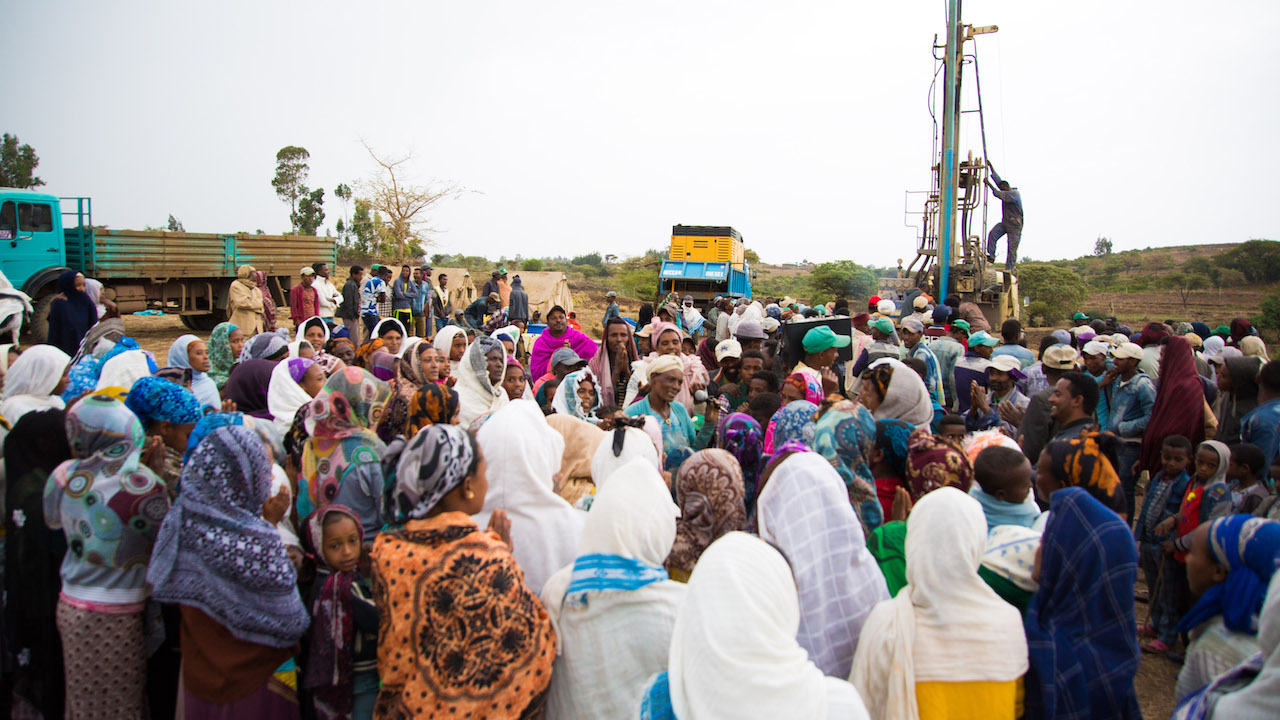 “Elelelelele”, a loud cheer is heard from the crowd signaling excitement and relief.

Story and photos by Hilina Abebe.