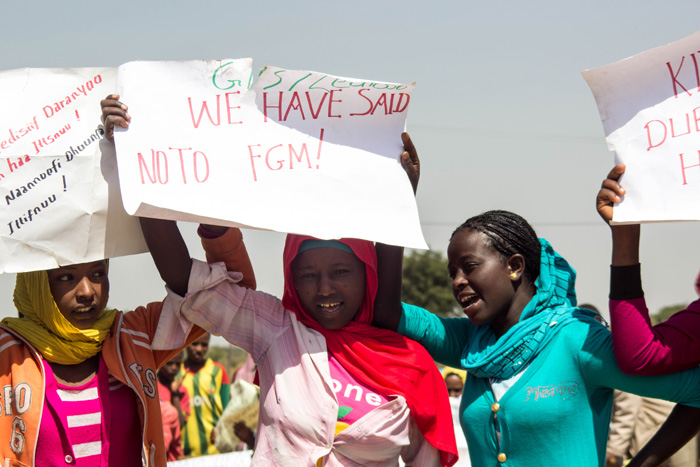 1. This is Norwegian Church Aid

1.1 Who we are
1.2 Selected Results from NCA's Work with Faith Actors in 2015
1.3 Incoming Resources and Expenditure

Norwegian Church Aid (NCA) is a diaconal organisation mandated by churches and Christian organisations in Norway to work with people around the world to eradicate poverty and injustice.

NCA provides humanitarian assistance and works for long-term development. We work where needs are greatest, with no intention of influencing people’s religious affiliation. Through decades of work in varying contexts, NCA has developed partnerships and positive experiences together with people and organisations rooted in diverse religions and beliefs. In order to address the root causes of poverty, NCA and partners advocate for just decisions by public authorities, businesses and religious leaders.

Committed to international ecumenical cooperation and development effectiveness, NCA is affiliated with the World Council of Churches (WCC) and is a member of the ACT Alliance. The ACT Alliance is a coalition of churches and affiliated organisations working in over 140 countries. It was founded in 2010 to increase impact, coordination and learning among its members and to avoid duplication.

2015 was the final year of NCA’s 2011-2015 global strategy. In looking back at NCA’s experience over the past five years, key lessons learnt were identified and gave direction to the development of NCA’s new global strategy and programme plan launched in 2016. NCA’s new strategy, Faith in Action, envisions two long-term goals: Save Lives and Seek Justice. Our faith-based partners have a particular responsibility and potential to contribute towards achieving these goals. The results that NCA has achieved together with faith-based organisations (FBOs) in the 2011-2015 strategic period have inspired our new strategy, and a selection from 2015 are presented in chapter 1.2 below.

NCA implements programmes through civil society organisations that promote human rights and deliver crucial services to marginalised groups. We also develop the capacity of these organisations through programme implementation and targeted capacity development initiatives. This partnership approach ensures sustainability, greater impact and contextual relevance of NCA’s programmes. NCA also supports the efforts of our partners to open up political space for citizen engagement in governance and to use existing room to hold governments accountable to their constituencies.

1.2 Selected Results from NCA's work with Faith Actors in 2015

Integrating Buddhist teachings has proved to be a useful method to get villagers engaged in the project. Together, they have planted thousands of new trees and gained official recognition from authorities for protection of the reforested area. Buddhist monk Ajaan Phitak has learnt how to lead projects to mitigate climate change and with NCA’s support has developed skills to provide guidance to youth groups.

A national-level consultation held in December 2015 resulted with a formal commitment by the Interreligious Council of Ethiopia to facilitate and lead the establishment of a task force to coordinate a national accountability mechanism to end child, early and forced marriages (CEFM) and female genital mutilation (FGM) by 2025. The event was attended by 345 religious leaders, women, and representatives of the federal and regional Ministry of Women, Children and Youth Affairs, the media and members of the development community including UNFPA and UNICEF.

Members of the ACT Palestine Forum (APF) marked their opposition to the many human rights violations committed against Palestinians in the Holy Land. Through different initiatives, the APF stood in solidarity and prayed for all the victims in Palestine and Israel following the 2014 Gaza war and the subsequent escalations of violence, demolitions of homes and displacement of people in 2015.

Messages focusing on Sexual Reproductive Health Rights (SRHR) and family planning discussed in churches and mosques in Malawi have created more openness around these family issues. Members of faith communities confirm that to the use of contraceptive methods has provided their families with more time between pregnancies, increasing women’s opportunity to attend to household chores and livelihood activities. This change comes as a direct result of awareness-raising and training sessions held for religious leaders in 2014 and 2015.

“We function as a bridge between people in the villages and the authorities. Social work is an important part of our mission as a church”, explains Susana Marquinha (29), member of a church-based budget-monitoring group. NCA has partnered with the National Council of Churches in Angola to monitor local budgets and secure how revenue from the oil industry is benefiting poor districts. Local churches are trained to understand how public budgets work, and how to track the expenditures.

The refugee crisis in Europe has moved the whole world. “The Greek have once themselves been refugees”, says one of the representatives of Apostoli, the humanitarian arm of the Greek Orthodox Church. NCA partnered with churches in Serbia, Macedonia and Greece to distribute food and other necessities to those who crossed the Mediterranean Sea from Turkey to Greece, and moved further up through the Balkans.

Vietnam has a cautious approach to civil society development, and the space for non-state and non-party actors is limited. For this reason, gathering religious leaders is politically challenging. Despite this, political leaders and leaders of all the country’s 14 religions were present at the conference together with almost 1,000 volunteers from faith-based organisations. See chapter 3.4, Climate Justice, for more details of the output from the conference.

Two suicide attacks on churches in Youhanabad, Lahore (Punjab) on March 15, 2015 and the subsequent lynching of two Muslim suspects caused riots and tensions between Christian minority and Muslim majority groups. Local interfaith community peace groups immediately intervened and played a key role to normalise the situation and prevent an escalation of violence through dialogue between Christians and Muslims. See Chapter 3.1, Right to Peace and Security, for more details.

The Norwegian Agency for Development Cooperation (Norad) continued to be NCA’s main donor in 2015 via a five-year cooperation agreement (2011-2015) and a series of addendums to this agreement for country specific restricted funds. Funding from the cooperation agreement was NOK 166 million in 2015, whilst the total amount of the addendums was approx. NOK 130 million. See Table 1.3.1 for details of Norwegian embassy agreements which make up most of this amount. These figures were relatively similar to those from 2014, with the main increase resulting from a new four-year agreement for Haydom Lutheran Hospital in Tanzania. The total for this agreement is NOK 60 million for the entire period. NCA successfully secured a new four-year cooperation agreement with Norad in early 2016, receiving the highest score of all applicants – on Norads new assessment tool, RAM Light (82 out of a possible 100). NCA’s high score was rewarded with a 15% increase from our previous agreement.

NCA’s funding from the Norwegian Ministry of Foreign Affairs (MFA) and the Royal Norwegian Embassies totalled around NOK 259 million in 2015, which is relatively stable compared to the 2014 figure of NOK 262 million.

Key developments in NCA’s cooperation with MFA include the signing of a new Gender-based Violence (GBV) agreement for the amount of NOK 66 million over a three-year period. The intention of this agreement is to scale-up the results NCA and partners have achieved in combating GBV in the Democratic Republic of the Congo. This agreement also builds on a positive cooperation between NCA and MFA developed through a three-year humanitarian WASH agreement - the first phase of which was finalised in 2015 and an application for a new three-year agreement was submitted to MFA at the end of 2015. NCA also entered into a new three-year agreement with the Royal Norwegian Embassy in Guatemala City for NOK 15 million during the reporting period. This agreement was cancelled in early 2016, only one year of programme implementation, due to the planned closure of the embassy mid 2016. A long-term cooperation agreement with the Royal Norwegian Embassy in Malawi for a health programme, implemented together with local partners and Norwegian educational institutions, was terminated in 2015. An overview of all current agreements with Norwegian embassies is included in table 1.3.2.

NCA received humanitarian funding to respond to acute and protracted crises across the globe in 2015. The largest of these responses was to the refugee crises in Syria and surrounding countries, in Iraq, South Sudan, and Nepal. In addition, NCA secured grant agreements to be able to respond to smaller scale ongoing emergencies. 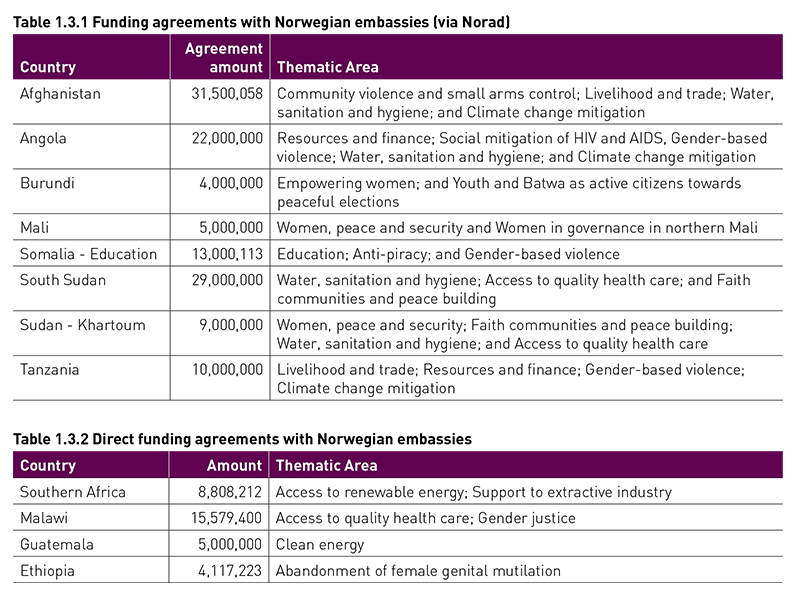 NCA has succeeded in diversifying and increasing its funding base over the course of the 2011-2015 strategic period. This has occurred despite challenges faced by global institutional donors due to the aftereffects of the financial crisis and shifting funding priorities to tackle domestic issues such as the refugee crisis in Europe. In a difficult global funding environment, NCA has continued to grow and diversify its global institutional donor funding base. A key step in achieving this has been working strategically and systematically with our country offices to develop NCA’s capacity to apply for and manage funds from a variety of donors. In 2015 NCA signed funding agreements with UNICEF, UN OCHA and EuropeAid, along with various bilateral European agencies and embassies in the countries we work. These included UNFPA, the Swedish International Development Cooperation Agency (SIDA) and the Dutch Ministry of Foreign Affairs.

Cooperation with ACT sister organisations has also been a key source of income, both in countries with joint ACT programmes and in countries where they support either our ACT Appeals or provide bilateral support to NCA’s programmes. This has allowed NCA to access funds from our sister agencies’ back donors, such as the Department for International Development (DFID, UK) and the Department International Development Agency (DANIDA).

Close to 750,000 Norwegians financially support NCA’s work each year through one-time donations, private monthly donations, church offerings, purchasing symbolic gifts in our web shop, or by participating in the annual NCA Lenten Campaign and Fundraiser3. This demonstrates NCA’s high level of trust among Norwegians. We work daily to honour this trust through openness, accountability and documentation of the achievements in saving lives and seeking justice.

In 2015, NCA raised close to NOK 214 million in Norway. Both private monthly donor agreements and the annual NCA Lenten Campaign and Fundraiser ended up with all-time high results at NOK 53 million and NOK 37 million respectively. Fundraising campaigns for NCA’s humanitarian responses to earthquake victims in Nepal and refugees in Europe and the Middle East raised more than NOK 50 million. NCA also received strong support from our church constituency who raised a total of NOK 55 million in 2015 through intercession, offerings, the annual NCA Lenten Campaign and Fundraiser and stand-alone fundraising campaigns for specific humanitarian responses. Corporate Partnerships added NOK 18.5 million in contributions to NCA’s work.

Most of the funds raised from individuals in Norway are unrestricted funds. These provide NCA with the ability to respond quickly when an emergency occurs and to enter into long-term cooperation with local partner organisations working in challenging environments. 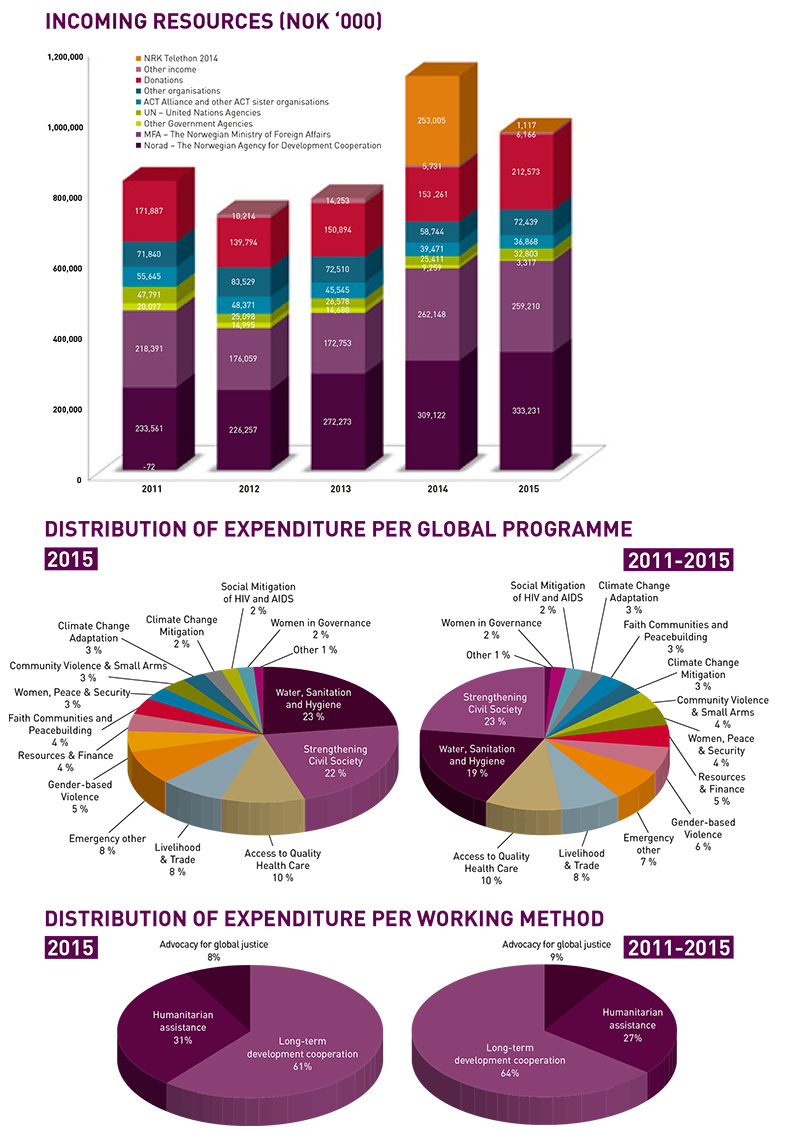