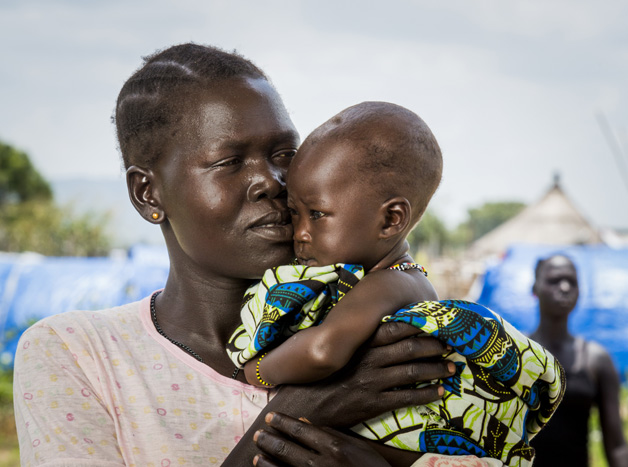 “My name is Helen and I come from Bentiu in South Sudan. I’m about 35 years old. My son is four months old and called Wende. He was born here in Don Bosco camp. I fled from the war and came here to this camp in January. My husband is a soldier and is still at the front.”Photo: Erik Thallaug/Norwegian Church Aid

In 2015, 695,488 rights-holders received services through this programme. The focus has been on providing essential maternal and neo-natal services and primary health care in areas affected by conflict or difficult to reach. This has resulted in an increase in safe deliveries and a reduction in maternal and child mortality rates. Vaccination campaigns have also been successful in reducing the prevalence of some diseases. NCA’s Access to Quality Health Care programme was implemented in the following countries in 2015: Malawi, Myanmar, Palestine, South Sudan, Sudan, Vietnam and Zambia.

The health sector in Myanmar is highly centralised. The state and regional governments have no jurisdiction over the state and regional departments – only a coordination role. There is no mechanism securing hospitals responsiveness to local needs, and communities are not part of the decision-making processes to improve health facilities and services. On the contrary, health systems in ethnic states are decentralised. The Karen, the Karenni, the Mon and the Shan, all have their own health systems with complete autonomy over programming, as well as administration for services in their respective areas. Their primary healthcare approaches are adapted to local contexts and involve community participation. In the isolated and conflict-affected areas of ethnic states, healthcare services are provided by mobile teams of health workers, including long-term NCA partners. These ethnic service providers manage an extensive network of workforce members who live and work in their own communities. They have been operating for over 26 years and believe that their unique operating model, skills and experience should be used by the new Myanmar government to strengthen the national health system.

The Health Convergence Core Group (HCCG), a body representative of these ethnic health service providers, have lobbied the Myanmar government to develop a federal health system. In early 2015, they released a concept note, which highlights the need to strengthen and expand HCCG’s comprehensive primary health care model, with formal recognition for the existing ethnic health governance structure. To retain responsibility for healthcare provision in a future power-sharing model with the government of Myanmar, this concept paper has been brought to several high level meetings with the Ministry of Health (MOH) throughout the year. In shaping the new Myanmar following decades of civil war, it is critical that all stakeholders are mobilised and included in the consultation to build consensus and support.

NCA has provided several of the HCCG members with long-term support. This has encompassed both programme funding and capacity development in areas such as gender and conflict sensitivity. NCA also facilitated networks between these ethnic health providers and NCA partners operating from Yangon. These linkages were especially important during the years of conflict as the relations between these two groups of civil society actors was often characterised by misunderstandings and mistrust. With a National Ceasefire Agreement in place, HCCG members are able to draw on capacity and expertise gained through long-term partnering with international NGOs like NCA, as they work towards developing the federal health system envisioned above.

WHY: Nurse educators lacked academic skills needed to meet research needs and in turn improve the quality of their own academic practice and institutions. Existing nursing education research comes primarily from western countries and is not always relevant to the Malawian setting.

WHAT: Training of nurse educators in action research design; cooperation between Norwegian and Malawian members of academia to develop and conduct action research relevant to the Malawian nursing education context.

This process started by developing the capacity of 22 nurse educators in action research and disseminating their findings at an international conference in Lilongwe in 2012. Phase two linked up 28 nurse educators with professional tutors from Malawi and Norway for further action research. Nursing colleges where invited to come forward with abstracts for action research. Three groups composed of Malawian and Norwegian tutors along with the nurse educators, were selected for funding and approved by the National Health Science Research Committee. The groups’ research assignments focused on issues such as self-directed learning and factors affecting clinical performance. Their research was presented at a dissemination conference in Lilongwe in 2015, and the group is currently trying to get the research findings published in international nursing journals.

One direct output of the project is the increased volume of literature about Malawian nursing education. This has not only expanded the knowledge of those engaged in the project, but potentially those of the broader academic community. Research has also generated evidence that will be used to by nurse educators to improve their approaches and skills. As a result of the training, the nurse educators have improved their information literacy, which enables them to research and apply relevant literature to their work. They are also able to produce more realistic, specific and feasible recommendations in their research. Finally, the local community of learning established in this process will continue beyond the life of the project, since it had a positive effect on the learning environment in the nursing colleges.

WHY: Cancer is the second most common cause of death in Palestine. Treatment services within the West Bank, particularly in Gaza, are weak with shortages of facilities for specialised oncology care.

WHAT: Developed the capacity of medical staff at Augusta Victoria Hospital (AVH) in East Jerusalem; upgraded AVH facilities; advocated for Palestinians living in Gaza to access AVH’s services and facilitated their visits for treatment. An external evaluation of the project Strategic Cancer Care Initiative was conducted in 2015.

RESULTS: AVH has met the increasing medical needs of all Palestinians to access tertiary oncology services, and strengthened the Palestinian presence in East Jerusalem.

NCA has cooperated with a number of church-based and public health institutions in Norway for the past seven years to support AVH to become a national cancer care centre for all Palestinians, including those living in Gaza. The goal of the joint project has been to be able to provide patients with comprehensive cancer care including radiotherapy, surgery and chemotherapy. An emphasis of the project has also been on developing AVH’s institutional capacity, since it is a Palestinian hospital strategically located in East Jerusalem in a context dominated by the Israeli occupation.

2015 saw the improvement of the quality of the cancer care services for Palestinians. This came as a result of a training programme for AVH health staff, facilitated over many years by the Norwegian Radium Hospital (part of Oslo University Hospital) and Betanien University College. In 2014-2015 the programme was attended by 36 nurses and lab technicians, who are now better able to respond to the changing needs in cancer care and have developed their awareness of relevant research. The surgical oncology department was also renovated in 2014-2015, and this upgrading of technology and infrastructure means that AVH can offer patients safe and well-equipped facilities for diagnosis, treatment and care of cancer patients.

Patients from Gaza and remote areas of the West Bank have been supported in accessing cancer care provided by AVH. This includes the almost 2,000 patients (60% women) who were assisted by the project’s Gaza cancer support and busing programme in 2014-2015. Without transportation services like this, Palestinians living in Gaza face major challenges in obtaining permits from the Israeli authorities to enter Jerusalem and to stay for the entire period of treatment. Despite difficulties, AVH has managed to advocate for access and has covered accommodation costs for Gaza patients while in Jerusalem. AVH’s important role in facilitating the use of their hospital’s services by residents of Gaza, along with the hospital’s role in strengthening the Palestinian rights to East Jerusalem19 have been highlighted in the 2015 evaluation report as two significant results from the project.

In South Sudan, a change within the Health Pooled Fund saw NCA supported activities transferred to World Vision. This significantly reduced NCA’s engagement in direct service delivery. In Vietnam, activities focusing on the nexus between climate change, natural disasters and health have not progressed as much as expected since the start up in 2014. Strengthening local health clinics has been challenging due to lack of funds and constraints on NCA’s capacity. Despite this, the project has implemented activities under this programme including first-aid training for members of the Rapid Response Teams and the staff of Buddhist charity clinics.

An evaluation of the Strategic Cancer Care Initiative project in Palestine identified a lack of preventive and early detection efforts, but documented a high degree of relevance for meeting medical needs of Palestinians. A further lesson from 2015 and the entire 2011-2015 strategic period is that mobilising faith leaders and making use of religious resources give results when it comes to challenging social, religious and cultural norms that uphold GBV and poor health conditions. NCA’s GBV and Reproductive Health programme in the new programme plan will build on these lessons learned and continue developing linkages and synergies.

OUTCOME 1: Rights-holders have the knowledge and means to protect themselves from diseases that are likely to represent a significant risk to health

Achieved in Myanmar, Sudan, Malawi, South Sudan and Zambia. In Malawi 1,240 youth have been informed about SRHR through 40 active youth clubs and religious leaders have been involved through dialogue sessions with the youth. This is an achievement since SRHR has not been openly discussed within the church before, since it was considered taboo to talk about these issues.

OUTCOME 2: National duty bearers are influenced to deliver on the right to primary health care services

Achieved in Palestine, Malawi, Myanmar, Sudan and Zambia. In Myanmar 27 auxiliary midwifes were trained by Back Pack Health Working Team and 124 mobile teams of trained health workers and village health workers provided treatment to a total of 62,311 cases including 1,037 cases of malaria.

OUTCOME 4: Rights-holders have access to safe maternal and child services

This outcome has not been selected by any of the countries with this global programme.

Achieved in Malawi and Palestine, four Norwegian nursing colleges have been mentors for Malawian nursing colleges assisting them in developing research projects with the goal to be accepted by international nursing journals. In Palestine, 23 nurses and 13 lab technicians have been trained by the Betania Foundation and the Radium Hospital in the changing needs in cancer and developed their critical awareness for relevant research findings.