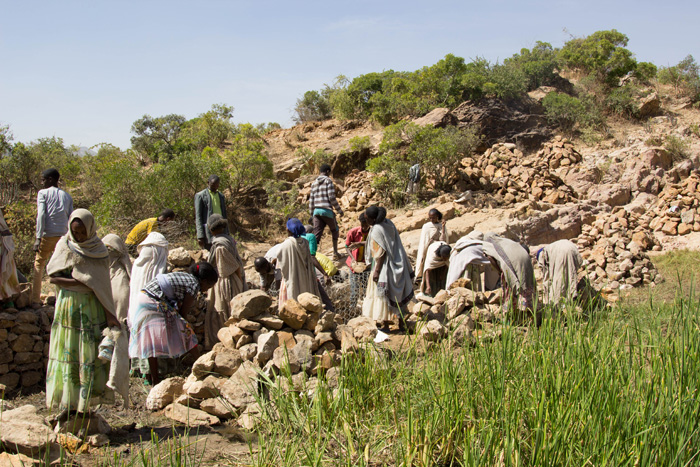 Overall goal: Reduction of the vulnerability to climate change of poor and marginalised people and communities.

With an emphasis of upholding and increasing people’s food security, whilst preparing and mobilising for extreme weather events using a Disaster Risk Reduction (DRR) methodology, NCA and partners have reduced the vulnerability of another 103,405 persons in 2015. NCA’s Climate Change Adaptation (CCA) programme was implemented in the following countries in 2015: Angola, Brazil, Ethiopia, Guatemala, Haiti, Kenya, Laos, Mali, Southern Africa, Vietnam and Zambia.

The first of the global outcomes for this programme focuses on mobilising people to be able to mitigate risks in their communities in association with natural disasters. To achieve this in 2015, emphasis was put on communities practicing and utilising early warning systems, in addition to ensuring the integration of existing social structures, such as FBO networks, into federal structures for disaster preparedness and response. This last point is of particular relevance in Asia, where authorities have systematically established structural interventions such as early warning systems, typhoon shelters and relocation areas. Community understanding of how to utilise these is often lacking however NCA and partners have addressed this gap by providing training for communities, advocating for authorities to provide communities with contextualised alert messaging, and linking these structural interventions with existing community structures to ensure they are utilised effectively in disaster response.

NCA and partners’ experience from working towards this outcome in 2015 and the entire 2011-2015 strategic period have informed ACT Alliance policies on DRR and climate change mitigation. These have in turn been used to influence the outputs of two key events in 2015, namely UNFCCC COP 21 in Paris and the Third UN World Conference on Disaster Risk Reduction in Sendai. The frameworks resulting from these events were also deemed a success. ACT and other civil society actors contributed to human rights for the first time being acknowledged in climate change protocols. Civil society is eagerly awaiting the concrete results of these frameworks on the ground.

WHY: Vietnam is highly vulnerable to climate change and natural disasters. These threaten the safety of the population and the country’s future economic development.

WHAT: NCA in Vietnam facilitated the first ever national interfaith conference on the environment and climate change. Bringing together political leaders and faith-based actors, the conference highlighted how these actors can respond to the effects of climate change.

RESULTS: A milestone political framework for the active involvement of faith-based actors in community-based responses to climate change and environmental protection in Vietnam was signed. This has the potential to increase the country’s resilience to climate change and further enhance the development of a civil society.

FBOs represent the only rooted social movement outside the political party system in Vietnam, and have broad outreach and mobilisation capacity. Their potential to mitigate social tension and to contribute with mobilisation and support to vulnerable population groups is significant, but the political space for their active involvement has been limited. NCA’s partnerships with FBOs and successful advocacy work has opened doors and created new opportunities and arenas for religious actors in Vietnam.

One such arena was the first ever National Interfaith Conference on the environment and climate change held in Hue, Vietnam in December 2015. NCA facilitated the event, gathering around 500 delegates, representing all 14 religions in Vietnam and political leaders to agree on a framework for the involvement of faith-based organisations in climate change response and environmental protection towards 2020. This historic event, and its political declaration, has opened an entirely new space for FBO engagement in Vietnam.

FBOs are now seen as part of the solution to addressing Vietnam’s increasing vulnerability to the impacts of climate change. Significant efforts will have to be made however, by the FBOs themselves and other stakeholders, if they are to fulfil the ambitions mapped out for them at the conference. Key to success in this process is building on the experience of the pilot models applied by NCA’s faith-based partners, as best practice examples for reference and replication.

One such pilot model with significant progress in 2015 is the building of disaster risk management skills for local communities in form of local Rapid Response Teams (RRTs). These RRTs are established with local faith-based actors as key contributing members. They are trained to use practical tools related to DRR and social work, and to coordinate and cooperate with other local response actors. Vietnam’s two most significant faith-based youth movements, the Buddhist Youth Association and the Catholic Youth, are important elements in the RRTs. Strengthening these FBO youth movements and including their members in the RRTs provides valuable learning arenas for organisational development.

Another important factor is ensuring coordination and cooperation between the faith-based response infrastructure, the Red Cross and the government’s Flood and Storm Control Centre (FSCC). These government institutions have never involved faith-based members before. Professional, capable and mobilised FBOs working constructively with Vietnamese authorities can add value to the national disaster response capacity and Vietnamese Climate Change response strategies. They can also be a driving force in the development of a more open and participatory Vietnamese society.

WHY: Indigenous communities are often excluded by the state’s efforts at mitigation leaving them less prepared to reduce the effects of natural disasters. Levels of exclusion are amplified for women in these communities.

WHAT: Using a community based DRR approach, women were trained in disaster response techniques, equipped with tools and organised into rescue committees. Advocacy towards government institutions at the local and national levels was used to institutionalise local structures.

RESULTS: Indigenous women are better prepared to respond to natural disasters. Formal cooperation between the women’s community based emergency response structures and both local and national authorities ensures their sustainability and possible inclusion in the national disaster mitigation structure.

The impacts of recurring geophysical and natural disasters are felt by all members of the communities they strike. The fact that women tend to remain in their communities, whilst men often leave to find employment, makes them particularly vulnerable when earthquakes, landslides and floods hit. Despite this, women are rarely trained in disaster response and are excluded from established emergency preparedness structures. This means responses often don’t meet their needs and they are not equipped to be part of these responses. Whilst a national policy for DRR and other policies legislate for women’s inclusion in socio-economic matters, only a moderate increase in women’s participation in disaster preparedness and response has been seen.

NCA has addressed this situation in four indigenous Maya Mam and Quiché communities in Tectitan and San Pedro Jocopilas Municipalities - areas heavily exposed to impacts of climate change – by establishing female rescue committees in each of them. This has not only increased the community members’ safety, but has also established greater recognition of women’s capacities, increased their confidence and ensured women’s needs are addressed in future responses.

NCA and partner CODEFEM have worked with women of all ages, including youth, in these communities for several years to establish these structures. The women have been involved in relevant community mapping exercises and have organised themselves into rescue committees. These committees have been trained by CODEFEM, CONRED15 and the municipal fire brigade in areas such as first aid, psychosocial recovery, and search and rescue. Committees have rehearsed emergency procedures (mock drills16) regularly, and obtained certification to become part of the provincial emergency response teams. A cooperation agreement was signed with the municipal level of CONRED in collaboration with local municipalities to ensure the committees are kept up to date on information and their DRR skills.

Fortunately these communities were not struck by any disasters in 2015. However, the emergency committees have maintained levels of readiness by updating contingency plans, meeting regularly and conducting mock drills. The agreement with CONRED also ensured the committees’ skills and networks were maintained during the reporting period. To ensure sustainability of the committees beyond NCA and CODEFEM’s support, CODEFEM drafted an additional agreement with CONRED, this time at the national level, to provide the committees with future training and materials and with a formal role in the national disaster mitigation structure. The ambition is for this to be signed in 2016.

The CCA programme continued to be implemented in accordance with plans in the reporting period with no significant deviations. The fact that some of NCA country offices with CCA programmes are part of NCA’s current geographical focus process did however mean that these programmes’ funding plans were given a lower priority.

Lessons learned at the end of 2011-2015 strategy include the capacity challenges faced by country offices and the partners when it comes to starting up a new programme like CCA. With 12 countries included in the programme, there is a need to invest in the capacity of partners and country office staff using a mix of country and HO resources. Increased capacity allows for smoother transition to new interventions and greater potential to diversify funding sources. In contexts characterised by religious strife, political difficulties, or totalitarian regimes the climate change discourse is often seen as a non-controversial theme and can thus function as a door opener for processes relating to dialogue. The programme design itself was relevant for the contexts NCA works in, demonstrated by the results framework below presenting solid results under all the global outcomes in the reporting period. Finally, integration of DRR methodology in addition to adaptation has been important in order to protect lives and property.

OUTCOME 1: Rights-holders are mobilised to manage adaptation and disaster risk reduction initiatives in their own community.

Achieved in Vietnam, Myanmar, Laos, Ethiopia, Southern Africa, Tanzania and Haiti where rights-holders have been mobilised, trained and assisted in understanding and counteracting the negative effects of climate change.

Achieved in Brazil, Vietnam, Mali, Ethiopia, Angola, Kenya and Zambia, where rights-holders have reduced their vulnerability to risks.

OUTCOME 3: Duty bearers include CCA and DRR measures in budgets and policies

Achieved in Brazil, Zambia, Vietnam and Kenya where rights-holders have been instrumental in ensuring rooted advocacy is transformed into policy in the UNISDR world conference in Sendai and the UNFCCC COP 21 in Paris, committing duty-bearers through signed agreements.

Achieved in Guatemala, Vietnam and Haiti, making rights-holders more resilient to natural disasters through application of DRR methodology and interventions. Kenya and Zambia are making necessary steps with communities and authorities for implementing DRR measures.