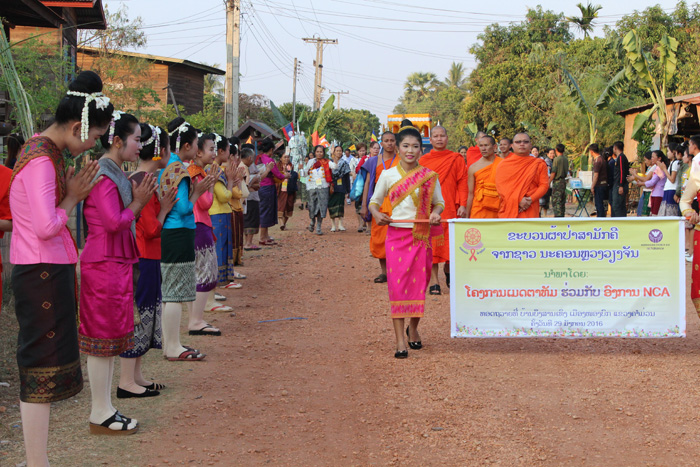 SOCIAL MITIGATION OF HIV AND AIDS

Overall goal: Improved quality of life for people living with or affected by HIV and AIDS.

In 2015, 41,356 people living with or affected by HIV and AIDS (PLWHA) have received care and support through this programme. Several countries also report positive changes in attitudes in local communities towards PLWHA. NCA’s Social Mitigation of HIV and AIDS programme was implemented in the following countries in 2015: Angola, Ethiopia, Laos, Malawi, Thailand and Vietnam.

The closure of NCA’s programme office in Thailand in 2015 did not signal an end to NCA’s efforts in the country; two newly formed Thai foundations are positioned to continue from where NCA’s programme left off. And they will do so in cooperation with a network of faith-based actors developed through NCA’s 30-years presence in the country.

Over the last 10 years, NCA’s programme focused on HIV and AIDS and the partnership portfolio was reduced to a fledgling interfaith platform. NCA worked alongside the platform to implement several rounds of HIV and AIDS programming funded primarily by The Global Fund to Fight AIDS, Tuberculosis, and Malaria. During this period, NCA worked systematically to enable the platform to be registered as a Thai foundation able to implement programmes without NCA’s support.

In 2014 the platform registered under the name Thai Interfaith Foundation for Social Development (TIFSD) with a strategic focus on HIV and AIDS, strengthening an inter-faith focus in development, and promoting accountability and good governance. Although it took time, their registration was an achievement for NCA’s advocacy work to secure a stronger role for FBOs in HIV and AIDS and development work in Thailand as well as globally. NCA’s accompaniment of TIFSD was intensified in 2015 to ensure it had the capacity, structure and network to independently manage donor-funded programmes following NCA’s exit.

The platform is not the only structure continuing NCA’s initiatives. A new foundation named Think Plus, with a vision to support youth in their self-development, was established by former NCA staff members at the end of 2015. It has also drawn on NCA’s institutional knowledge and networks, along with tools developed through NCA programmes.

As more donors in Thailand move away from supporting international NGOs, the two new foundations aim to attract donor funding available to local NGOs. Think Plus secured their first grant in 2015 and TIFSO has secured grants for three interfaith projects from a Thai Research Fund. The two continue cooperating on concrete projects, and have already piloted an initiative of developing a curriculum for building youth self-esteem. The first workshop was conducted for 30 grade 8 students. They are also running the project Leadership and Life Skill Development to Young Novice together at a local Buddhist temple.

WHY: Laos is defined as a low HIV prevalence country, yet there is an increasing level of infection amongst some groups including female sex workers (FSW). Only 30% of those infected receive Antiretroviral (ARV) treatment and 36% report avoiding visiting a clinic when needed due to stigma. FBOs’ role in HIV and AIDS prevention and care has been limited despite their potential to fill this role.

WHAT: Support services for People Living with HIV and AIDS (PLWHA); community stigma reduction; capacity development of peers and monks in counselling; peer awareness raising on HIV and AIDS and sexually transmitted infections (STIs); and advocacy for a stronger role for FBOs in HIV and AIDS work.

RESULTS:Results have been strengthened through the involvement of FBOs. Mortality rates among PLWHA have been reduced, and FBOs in Laos now have increased opportunities to play a role in care and support for PLWHA.

Due to the limited space for FBOs and other civil society actors in Laos, programmes have largely been implemented by NCA staff in cooperation with government counterparts. Since 2014 however, two local FBOs, Lao Buddhism for Development (LBD) and Metthatham, have been partners in NCA’s long-running HIV and AIDS programme. The programme had two components, one focusing on HIV prevention amongst FSW and a second related to care and support activities for PLWHA and community stigma reduction. Buddhist monks were involved in the latter with the intention to strengthen programme results, increase the capacity of the FBOs and create more space for civil society in Laos. A recent evaluation underlined the value the monks have added to the project along with other key results.

Identified results from the care and support component of the programme since 2011 show improved access and adherence to treatment for PLWHA and a reduction in the mortality rate from 3.7% down to zero among people supported by the project. Improvements in the health and wellbeing of PLWHA came as a the result of several initiatives including; monthly meetings for PLWHA self-help groups, follow-up on people on Antiretro Viral (ARV) treatment, and home visits by monks, medical doctors and peer group members. PLWHA confirmed the meaningful role monks played in these visits. These initiatives ensured that PLWHA not only had regular access to their ARV medicines, but also to professional healthcare workers and peer counsellors.

Communities show greater acceptance of HIV and AIDS, and a decrease in discrimination of PLWHA is noted. This is owing to increased access to treatment, which increases the perception of HIV as a manageable condition, and awareness-raising in communities where discrimination was reported. The following is a reflection from one of the monks “Our role in this programme is basically to reduce stigma and discrimination and to increase acceptance. Where they have been reports of discrimination in the community, the project staff will involve us in community awareness-raising sessions and in PLWHA home visits”18.

Another example of the added value of the monks was the role they played in building a PLWHA support centre in Luang Namtha. The provincial health authorities allocated land behind the local hospital and NCA engaged the monks to raise funds for construction of the centre through organising a Buddhist ceremony at the temple.

As NCA prepares to close its operations in Laos, there has been a focus on ensuring that FBO partners are positioned to continue their HIV and AIDS work. NCA has provided them with organisational capacity development, which has already resulted in LBD securing a grant from The Global Fund to Fight AIDS, Tuberculosis, and Malaria.

2015 has been a year of phasing out and handing over for NCA’s HIV and AIDS programme as a result of NCA’s geographical focus process, and the fact that the programme will not be continued in NCA’s new programme plan in its current form. Some of the components will however be included under the new Reproductive Health Programme.

2015 saw the closure of NCA’s programme in Thailand, the final year of implementation for the Laos programme, and the start of reduction in presence for NCA in Vietnam. NCA Vietnam prioritised building the capacity of FBO volunteers to provide psychosocial care for PLWHA. In Laos the end evaluation of the HIV and AIDS programme concluded that whilst it had significant positive impact on care and support, there was little evidence on its impact on prevention. The high mobility of the female sex workers meant that another approach for follow-up after training sessions should have been employed for this group of rights-holders.

NCA’s commitment to responsible exit strategies has meant investments have been made in Thailand, Laos and Vietnam in 2015, the results of which are exemplified in the cases above from Thailand and Laos. This shift in focus has meant greater variance in accordance to plans. This is reflected in the overview of global outcomes presented below. The focus has been on capacity and strengthening the collaboration with local governments and other stakeholders, including FBOs, to care for PLWHA and orphans and vulnerable children (OVC) like in Ethiopia and Laos.

Achieved in Malawi where work has been done with relevant stakeholders to inform the public that suspension of ARV treatment is dangerous for people’s health, and encourage people to stay on ARV. This was done after experiencing that healing ceremonies were carried out by people claiming to be pastors for people living with HIV discouraging PLWH from continuing with ARV.

OUTCOME 3: Local and national duty bearers are influenced to provide treatment and care for PLWH

Achieved in Ethiopia and Malawi. In Ethiopia referral mechanisms for PLWHA access to health and other services were facilitated by partners, such as providing health insurance programmes at minimal cost.

This global outcome was not selected by any of the countries with this this global programme.

Achieved in all countries. In Ethiopia 46 guardians and PLWHA were provided with business management and entrepreneurship training. All of them recieved seed money and started small businesses.

Achieved in Laos, Ethiopia and Malawi. In Laos a care and support project ensured that infected children and orphans of PLWHA exercised their basic rights for access to education.