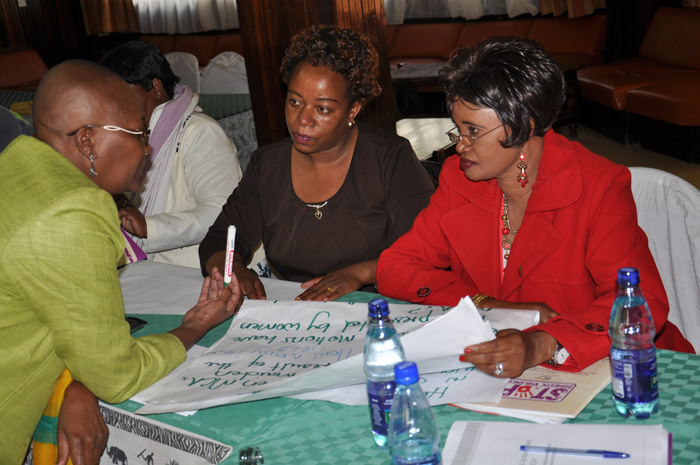 In 2015, 9,845 women built their capacity to participate in governance processes and structures. This resulted in an increased number of women assuming roles in (and sometimes being elected into) various structures for decision-making in their communities, local councils, faith institutions and churches. In South Africa, Kenya and Zambia, the national church councils conducted internal gender audits and developed tools and resources to promote gender equality and women’s representation. Inspired by, and making use of, new national constitutions and legislation for securing equal representation, churches took specific action to increase women’s eligibility for election to leadership positions and to promote female candidates. The Women in Governance programme was implemented in the following countries in 2015: Kenya, Guatemala, Mali, South Africa, South Sudan and Zambia.

The programme was to a large extent an empowerment programme for women to overcome barriers they face in patriarchal societies, to increase the number of women in leadership positions. The programme directly contributed to strengthening civil society, by encouraging the involvement of women in decision-making structures and increasing the legitimacy of civil society. Women are grossly underrepresented and excluded from decisions affecting themselves, their families and communities. Various well-known methods were applied to ensure women’s equal representation by building their capacity for leadership and by preparing them for candidacy in elections. Affirmative action and quotas for gender parity were adopted and applied in church structures and in local governments and councils.

At local and national level, faith-based organisations (FBOs) joined advocacy alliances for inclusion of quotas in national constitutions. They made use of the same strategy in their own church bodies, and succeeded in increasing the number of women in their leadership. Largely this was possible because they had incorporated similar strategies used by other actors in civil society, mainly women’s organisations, along with their experiences in building women leadership, providing mentorship, and demanding quotas for women.

Through opening up space allowing for their real participation, young indigenous women in Guatemala were able to bring issues concerning their lives to the higher political agenda. It was equally important to engage men, in order for men to acknowledge that women can hold positions and to commit men to support female leaders. However, backlashes and ignorance about the right of women to participate were observed. Female representation challenges gender power relations, and can cause resistance from influential men to give up power.

Women recognised as leaders in churches and political structures

WHY: Women have been underrepresented in decision-making bodies in Kenya, including in churches, where male domination prevails.

WHAT: Continued advocacy towards government and the creation of broad alliances between women’s organisations and FBOs. This work created new opportunities for women in the churches to lobby for their right of representation.

RESULTS: Women in churches adopted methods from the new National Women’s Charter and its accompanying action plan. These included affirmative action along with mentorship and leadership training, to enable women to run for office, including in church councils. Confident women took up leadership positions in churches, as well as in their communities.

It has taken a long time to see real commitment from the Kenyan government in ensuring equal representation between men and women, either at national or at municipality level. The same could be said about male controlled church structures, where women are underrepresented in decision-making bodies. This was challenged by NCA partners in Kenya.

After the approval of the new constitution in 2010, a long consultation process between the Kenyan government and women’s organisations, including NCA partner Women’s Empowerment Link (WEL), took place to secure women’s equal right to participation. This engagement opened up new windows of opportunities. It inspired the Anglican Church (ACK) to institutionalise gender equality in its leadership structures. Methods used were affirmative action, mentorship, leadership training, and alliance building with networks with necessary resources and skills. A guideline was developed by partners for mentorship sessions. This provided a platform for effectively strengthening women’s skills for leadership, in transparency and accountability, and in promoting common visions. ACK also reviewed its constitution, in order to further institutionalise gender equality.

The results of these initiatives have been numerous. For example, a more positive attitude towards women leadership in the church is now observed in the community. The leadership training and mentoring for women has resulted in women becoming more confident to take up leadership positions locally. ACK established peer-support networks for women who had assumed positions in decision-making. These changes in the church led to an increased interest in gender equity, not only in church but also in the wider community. At county level 287 women were trained in leadership, and in turn sensitised an additional 1,433 women and organised them in community groups through ACK’s Diocese of Makueni.

Despite various efforts by the programme to increase women’s opportunities to actively participate where decisions are made, there is still a long way to go before women are equally represented as leaders. For various reasons, not all NCA WIG programmes succeeded fully in promoting women leadership. In South Sudan, due to the continuous conflict, some of the planned activities were not possible to implement, however some good results were reported. See Results per Global Outcome below for details.

Lessons from the programme are many. Applying strategies of affirmative action, quota, leadership training, mentorship of women, and engaging men in support for women leaders, still meets a lot of resistance. Women are not always supportive of other women moving into leadership positions, and men in power are not eager to step down and let women replace them. In FBOs, male dominance and patriarchal structures bar women from leadership opportunities, while female members of faith communities meet barriers in religious doctrines, and indigenous women face specific challenges due to discrimination.

Most of the programmes had a specific focus on preparing women for candidacy at local and national elections. The programmes made use of new constitutions and electoral systems, which do not always ensure women’s equal representation. For example, while the 2015 Gender Equity and Equality Act was passed in Zambia in support of a more progressive constitution, the electoral system is still unfavourable to women’s representation. This was a big disappointment and backlash for NCA partners’ work to promote women candidates.

Further lessons underline the importance of internal organisational gender audits and assessments to provide new insights into how organisations are governed, and how more equal representation can be achieved. NCA also enhanced learning within Norwegian civil society by contributing to two publications in 2015, one focusing on NGO experiences in promoting women’s equality and empowerment and the other on reflections on 15 years of UNSCR 1325.

Not fully achieved, but good results in Guatemala, Kenya, and South Sudan, with an increase of women elected to local councils and in church bodies. In Guatemala, exceeding the annual target by 51%, 1,363 indigenous and mestizo women gained leadership skills, increasing their local participation.

OUTCOME 3: Duty bearers have been influenced to institutionalise the principle of gender balance and equity in governance structures

Achieved in Kenya, Zambia, South Africa, Guatemala, and South Sudan, through advocacy for affirmative action and quota for gender parity towards government and FBO leaders. The follow-up of new gender policies in churches contributed to more acceptance of gender equality and respect for women’s leadership.

OUTCOME 4: Duty bearers have been influenced to include international HR conventions on women’s rights in national laws and practices

Achieved in Guatemala and South Africa, through advocacy efforts towards national legislation. In Guatemala a request to the state to comply with the international mechanisms for eradicating GBV, and in South Africa through monitoring the state’s commitment to the SADC gender protocol. Not fully achieved in South Sudan.

OUTCOME 5: Duty bearers have been challenged to transform informal structures of power and/or patriarchy

Achieved in Southern Africa and Guatemala through applying tools and resources for churches.

Achieved in Kenya, South Sudan and Zambia, through providing good examples on capacity building, mentorship and skills training, including literacy and economic empowerment.