It's a full crisis. But we cannot give up on Haiti

Like many others, I have had a holiday now, some abroad and some in Norway. Then I could put the work tasks down. But the concern for my colleagues in Haiti was difficult to put aside. 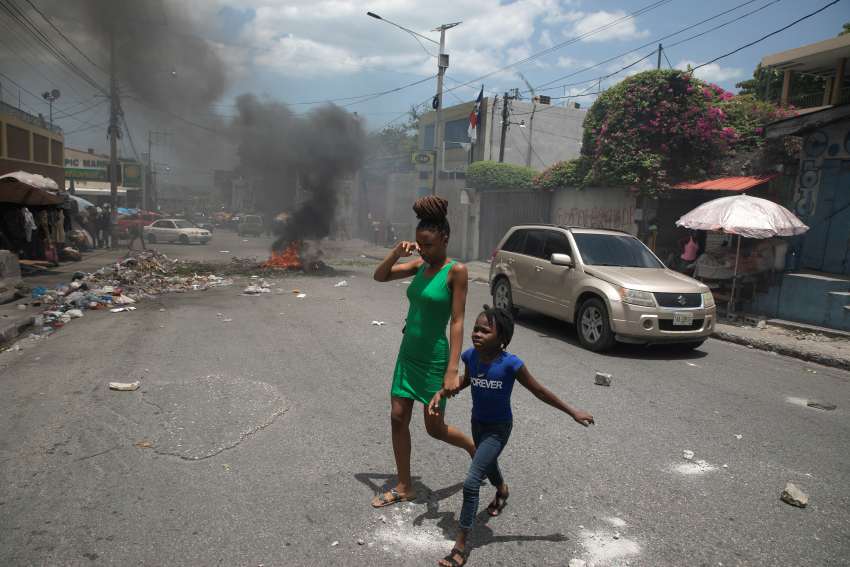 A woman and a girl walk past the burning barricades set up by protesters. Gang violence has increased sharply since the assassination of Haiti's president last year. Photo: Odelyn Joseph/AP.

Every day something can happen in the capital, Port-au-Prince. Roads and streets can be blocked by cars and buses, there can be violent demonstrations and many people are kidnapped. Or there may be battles between heavily armed gangs, particularly in the poorest parts of the city. The gangs are also behind the kidnappings.

Between 8 and 17 July, over 200 people were killed in the Cité Soleil district, after battles between the two rival gangs G-9 and G-Pép. BBC was able to tell that 114 of these were gang members, the rest were probably mostly random victims. In addition, over 250 people were injured during the shooting. Most of the inhabitants of the district are very poor, and many do not have the opportunity to get away.

In the southern part of Haiti, where NCA is working, the situation is more peaceful. Gangs exist there too, but they rarely kidnap people. Our Haitian partners can carry out their work with water, sanitation and hygiene, but it is very dangerous to drive from the capital to the south. The main road out of Port-au-Prince runs through Martissant, where the gangs for a long time have had control. It is also sometimes difficult or impossible to obtain fuel, or the roads are blocked by blockades. Sometimes it is the angry and desperate citizens protesting against government policies and lack of security that is behind the blockades, other times armed gangs are responsible.

Haiti is a country where a lot of things do not work and especially in the capital area, life is unbearable. There are tens of thousands who have fled their homes and are living in sports halls or other places. Every day, desperate Haitians set out on journeys in old and poor boats. The goal is the Bahamas, Cuba, or most preferably Florida in the USA. The price to join is usually high, the possibility of success is low. Every week people drown on this perilous journey. When they arrive in the United States, they are usually imprisoned and then sent back. The Bahamas and Cuba are also sending people back.

It is still very important for NCA to work in Haiti, we can still contribute something positive. Water supply to local communities can be improved and water sources can be protected from pollution. Better sanitation systems and education about hygiene can help give people in rural areas a better life. Haiti needs support from organizations like NCA, both in the humanitarian work and the long-term development work in this demanding situation.

We cannot give up

But there is also much that seems very difficult, at times almost hopeless. The Haitian government lacks the resources to create an effective health care and education system. Despite the fact that Haiti received large funds from international donors after the earthquake in 2010, Haiti today has a state that is barely functioning. There is reason to recognize that much was done wrong in the reconstruction work. The Secretariat of the Organization of American States (OAS) recently issued a statement in which they say that the work that the international community has done in Haiti over the past 20 years has been one of the biggest mistakes that have been made in international aid. It has not been possible to strengthen the Haitian institutions or civil society. There are many reasons why it went wrong. A steady stream of Haitians with higher education has left the country over the past 20 years. They have settled in the neighbouring Caribbean countries, in Canada or in the United States. At the same time, the interests of individuals have governed the various parties, and they have lacked political programmes. The aim has been to come to power, and when that has happened the various presidents and their governments and administrations have largely enriched themselves, the corruption has been extensive.

Those who have been unable or unwilling to leave the country are left with a desperate situation. And the forces that try to do something good is working an uphill battle. Through more than 20 visits to Haiti since I was there for the first time in 1998, I have had the opportunity to see first-hand how conditions have gradually worsened.

But we cannot give up on Haiti, the people there need support from the international community to get back on track. Several attempts at national dialogue are underway, although they have not yet progressed that far. In recent weeks, the government has carried out some measures against kidnapping and some of those behind them have been arrested, our Haitian colleagues tell us. The UN has an international observer group in the country. Some want back the UN forces that were in the country between 2004 and 2019. For now, China has opposed the sending of a new UN force, and thus the Security Council cannot make such a decision. The question is whether there is any way around it, if the gangs are to be stopped.