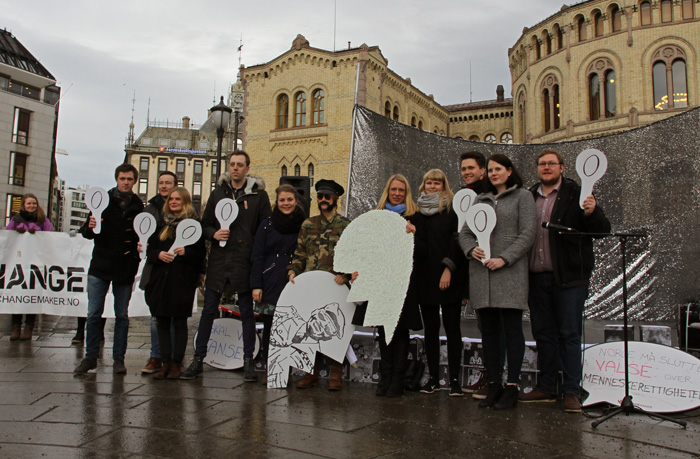 NCA is committed to addressing the root causes of poverty and injustice. To this end it is necessary to influence the attitudes held and decisions made by the powerful and those who control resources on local, national and global levels. Some of the main results achieved from NCA’s international advocacy work in 2015 are attributed to policy outcomes related to economic and climate justice.

Coming out of the United Nations Framework Convention on Climate Change (UNFCCC) Conference of the Parties (COP) 21 summit in Paris, the Paris agreement was more ambitious than many had dared to hope for. For the first time, the world witnessed a universal climate agreement applicable to all countries. It states that we shall not only limit global warming below two degrees Celsius, but aim at limiting the temperature rise to 1.5 degrees Celsius. It also calls for all financial flows to be consistent with a low carbon pathway and climate resilient development. A vital mechanism in the agreement is that all countries must increase their climate targets every five years to increase their ambitions.

In preparing for the Paris summit, the ACT Alliance launched the climate campaign “We Have Faith – Act now for Climate Justice”. It was supported by ACT Alliance members, and was coordinated with the broader interfaith movement. One of the concrete global results was an interfaith statement handed over to the Executive Secretary of the UNFCCC, during the last intersessional in Bonn prior to the Paris meeting. NCA and other ACT Alliance members were instrumental in developing the statement and mobilising for its recognition.

The global ACT Alliance advisory group on climate change of which NCA was part of, drafted ACT Alliance policy and statements. NCA contributed to the development of a dedicated campaign website, producing material as well as planning stunts. Activities were carried out in locations where ACT Alliance members are present, such as an interfaith climate conference in Vietnam and a bicycle caravan through Eastern and Southern Africa. A special emphasis was put on mobilising indigenous peoples, poor and excluded, as well as those living in rural communities.

The faith-based campaign collected 1.8 million signatures calling for climate justice. The petition was delivered to top officials at the UNFCCC at an interfaith event, where representatives from the French presidency were also attending. The message was conveyed to country delegations and distributed widely by media, both in France and internationally.

The Norwegian mobilisation for climate justice in preparation for the Paris summit started in 2014, and was scaled up in 2015. NCA coordinated the campaign in Norway, where we advocated for a fair and ambitious climate agreement. As part of the campaign, NCA demanded that the Norwegian Government make a commitment to increase Norway’s climate ambitions. NCA handed signatures that were gathered through NCA’s church constituency during the annual NCA Lenten Campaign and Fundraiser, where climate justice was highlighted.

A climate pilgrimage kicked off in the northern tip of Norway brought the campaign to new heights. Seven thousand people participated in the pilgrimage either by foot, by bicycle or by boat to complete the journey of 57,853 kilometres (almost 1.5 times around the globe!). More than 200 events took place all over the country, documented through 258 news-stories. The relay baton was then passed on to Sweden on its road to Paris, through an event attended by the Norwegian and Swedish crown princesses.

NCA was host for a Nordic ACT Alliance conference taking place in the context of a changing paradigm for aid and with the backdrop of pending or recent cuts in aid budgets in the Nordic countries. The conference questioned if we are seeing the beginning of the end to Nordic idealism in foreign policy and on global development issues, in favour of pursuing more immediate self-interest gains. It gathered 250 participants from civil society, academia and the government.

The report “The End of Nordic Exceptionalism?” was commissioned by the Nordic ACT Alliance members in 2015, and the questions raised in this report were the basis for the debate at the conference. It concludes that we are seeing some changes in the Nordic countries. While Norway and Sweden still keep to the longstanding ideals, Denmark and Finland are putting more weight on self-interest in their aid-policies. One of the articles, written by Professor Jeffrey Sachs, was printed in several major national newspapers in the Nordic countries. The report served as a source of evidence of the direction of official development assistance (ODA) over the years.

Another important topic at the conference was how aid, in collaboration with the private sector, must put emphasis on job creation. NCA commissioned a research paper focusing on creating job opportunities in small and medium sized enterprises. This paper, presented at the conference, provided guidance for NCA to give input to a forthcoming Norwegian government white paper on this issue.

The conference gave space to the Nordic debate on aid and reiterated the potential that lies in closer cooperation through the ACT Alliance.

As part of the international fossil fuel divestment movement, Changemaker won a ten year long battle when in 2015 the Government Pension Fund Global of Norway finally withdrew all its investments in coal. Climate change was also high on Changemaker’s agenda in events leading up to the COP21 Summit; participating in the annual NCA Lenten Campaign and Fundraiser, ACT’s climate campaign, and in a targeted campaign to encourage Norwegian politicians to take the lead in achieving a low-emissions future.

The campaign spurred debate around oil subsidies and put the need for increased investments in renewable energy in the spotlight. Advocacy action has not only brought climate results however. Changemaker’s long-running campaign to stop illicit capital flight, “The hunt for honesty”, achieved an important result when in 2015 Norwegian legislation was further tightened, requiring Norwegian companies to disclose their income and taxes per country and not only at an aggregated level. 2015 also been a year of growth for Changemaker with new local chapters established and increased attendance in their annual summer camp.

Next Chapter: 6. Organisational Learning and Development