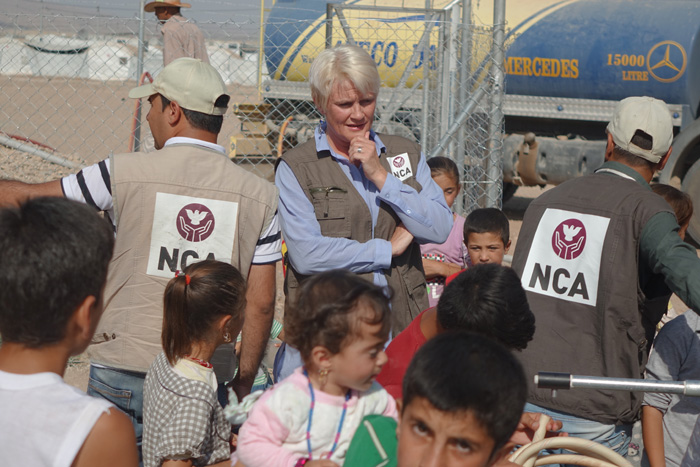 Outlook from the General Secretary

In our partnerships with local civil society organisations and religious communities around the world, we witness the power of people when they come together for a common cause.

Norwegian Church Aid stands as one with its partners in the pursuit of a just world. This global results report testifies to the persistence and hard work of our partners. It is only with local sister organisations and faith actors in Syria, South Sudan, or in Ethiopia that we are able to move mountains of despair and suffering, and transform people’s lives. It is through our partnerships that things get done.

In Vietnam, we are building a faith-based disaster response network. In Kenya, women are recognised as leaders in churches and governing structures. In Burundi, youth associations hinder election violence in fragile communities. In Tanzania, villagers push a mining company to deliver water and build schools as promised. In Ethiopia, an interreligious council establishes a national accountability mechanism to end child marriage and female genital mutilation by 2025.

In Paris, a climate agreement was signed; more ambitious than what we could have hoped for. During the preparations, Norwegian Church Aid contributed through its staff expertise and support to the World Council of Churches in the mobilisation of interfaith networks. We were actively involved in creating the ACT Alliance climate campaign. We walked with our constituencies in a pilgrimage for climate justice, and we worked towards the same goal with many of our partners in countries where we have a presence – because we are moved by the same diaconal drive for justice and care for creation.

In the midst of uncertainty, we need to tell each other stories that foster hope. This report provides such stories. Behind every number in this report, there is an individual that has gained skills or resources to live a dignified life. For every woman or man engaged in our projects, there is a person that is overcoming the impossible. Although we celebrate our partnerships and the results achieved through years of strengthening our collective muscle, Norwegian Church Aid does not underestimate the power of one.

In the face of tremendous difficulty, Ahmed is such an individual. A 17-year-old boy from Syria, NCA met Ahmed on the border crossing between Macedonia and Serbia in September 2015. Ahmed had travelled the Balkan route alone. On the road, he met Khaled, who was 10 years older. Khaled had been unable to move his wheelchair through rocky and uneven grounds. Ahmed had carried him for kilometres to reach the registration centre on the Serbian side. He could not abandon Khaled. Once at the registration centre, Ahmed searched for help for his friend. What compelled him to help? When asked, he pointed to the sky and replied: “I am under the eyes of God”. A young man’s story can be an important reminder that we are all under the eyes of God. In times of hardship and uncertainty, faith can move us to do what we initially thought impossible.

Some of the results we have achieved during 2015 seemed unreachable only a few years ago when we drafted the strategy. I am proud to report that together with our constituency and our partners, our presence is felt around the world. I am also proud to lead an organisation that demonstrates great competency and enthusiasm for what lies ahead as we have now embarked on a new strategy.