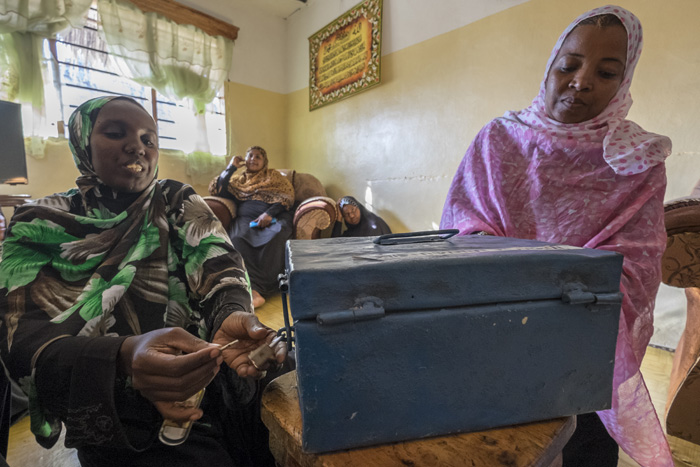 In 2015, NCA organised 56,586 rights-holders into groups to actively improve their own livelihoods. Results indicate that NCA and partners are particularly well placed to economically empower women through mobilisation, raising awareness and promoting their role in economic activities. The Livelihood and Trade Programme was implemented in the following countries in 2015: Afghanistan, Brazil, Kenya, Laos, Palestine, Myanmar, Sudan, Tanzania, Somalia, Southern Africa and Zambia.

In Tanzania, religious leaders and faith-based actors continued to be at the centre of advocacy on trade issues. In 2015, NCA partners advocated the government for an improved business environment for interreligious (IR) VICOBA groups and their members. Through multi-stakeholder forums, partners were able to facilitate dialogue on legislation and policies that hindered the growth of small and medium enterprises. Coordinated by NCA partner African Evangelistic Enterprise, religious leaders, the National Bureau of Statistics, Tanzania Food and Drugs Authority and the Ministry of Trade and Industry worked together to address challenges facing IR VICOBA groups in Singida District. Similar initiatives from 2015 include the Tanzania Ecumenical Dialogue Group organising the first round-table for a policy dialogue series on trade and business focusing on fair trade and promotion of locally produced goods.

Parallel to these advocacy efforts, NCA and partners promoted market access for marginalised rural communities, including showcasing of IR VICOBA groups’ products at town, district and regional open markets. Small competitions were held at these events to select best products for further branding and market exposure, and to encourage entrepreneurial activities.

Women have the power and agency to benefit from economic activities

WHY: Norms and institutions limit women’s access to resources needed for economic advancement.

WHAT: Organised in groups, women gained access to financial and other production inputs, such as machinery, equipment and packaging material, needed to engage in business and collaborate in approaching the market. Civil society partners raised community awareness around women’s roles in the economy.

RESULTS: Economically empowered women now have the ability to act on decisions made, and control resources and profits in contexts where traditional gender and cultural barriers previously limited women.

Market access is a common challenge for rural and marginalised communities. Barriers include lack of infrastructure, quality and quantity production, packaging and storage. NCA recognises that women face additional challenges associated with gender and cultural norms. In 2015, NCA and partners continued to empower women to participate in economic activities in contexts as diverse as Afghanistan, Palestine and Tanzania.

In rural parts of Afghanistan, where local customs and cultural barriers severely limit women’s engagement and mobility, significant achievements took place through self-help groups (SHG) and cooperatives. As a result of mobilisation and advocacy efforts from partners, 1,124 women were organised and accessed valuable knowledge about agricultural techniques. In Daikundi, women farmers reduced their post-harvest losses by using fruit dryers, improving the shelf-life and price of their products.

Across Tanzania, the IR VICOBA approach continues to economically empower women. In 2015, another 1,360 groups were established providing approximately 34,000 rights-holders access to financial resources. Women represent more than 65% of IR VICOBA members, and more than 80% are reported to have invested small loans in small business and livelihood projects, with the best performers earning between USD 90 and 220 per month. In 2015, NCA and partners focused on strengthening existing groups’ entrepreneurial skills and improving their farming practices through pilot projects in Kiteto and Kilosa districts.

Results from Palestine illustrate the significance of economically empowering women, as cultural stereotypes limit women’s participation to certain economic activities or sectors. Lack of support from family members and the local community discourages entrepreneurial activities. When approaching the wholesale market women are constantly offered lower prices for their products compared to male producers.

A majority of the female entrepreneurs were able to raise their income by 30 to 50%, and are now able to invest in their children’s education. Considering the extensive damages caused by the military attack on the Gaza strip in the summer of 2014, these results are impressive. For this reason, the programme also prioritised providing start-up grants allowing women to re-establish livelihood projects.

WHY: Improper agricultural techniques and limited access to, and awareness of the benefits of agricultural inputs is limiting farmers’ production and profits.

WHAT: Communities were organised and assisted in adopting good agricultural practices and focusing on adding value to their produce.

RESULTS: Farmers organised in groups, which gained them improved market access and increased their individual income.

In 2015, through organising themselves in various ways, farmers benefitted from adding value to their agricultural products and strengthening their market access. NCA and partners supported farmers in their efforts in the following countries: Afghanistan, Brazil, Kenya, Myanmar, Somalia, Sudan, Tanzania and Zambia. Common for most initiatives is the application of a more holistic approach, where both supply and demand factors are taken into account. This entails both improving farmers’ agricultural practices and their access to farming inputs (seeds and fertiliser), as well as strengthening their position in local or domestic markets.

In the Ayayarwady Delta of Myanmar, the focus on improving seed quality and strengthening farmer capacity gave concrete results. 130 of 180 farming households improved the quality and increased the volume of their rice yields considerably, with some of the best now producing over 40% more rice per acre compared to when they used only traditional farming techniques. Their income has seen similar increases as well. These results are partly due to NCA and partners having a scope beyond input provision, including providing farmers with accurate market price information, equipping them with improved negotiation skills and establishing direct linkages with potential buyers.

In Central and South Darfur States of Sudan 9,738 households strengthened their farming livelihoods in 2015 through improved knowledge, skills and practices as well as access to necessary input. The programme emphasised training 740 lead farmers responsible for training groups of ten farmers on nine improved agricultural techniques. An evaluation indicated that practices and techniques were adopted by 82%, and interviewed farming groups estimated a 20% increase in crop productivity as a result.

Within riverine agro-pastoral and pastoral communities of Somalia 3,730 rights-holders (2,173 women, 1,557 men) strengthened their livelihoods in 2015. The programme focused on increasing the production capacity of households with the primary objective of improving their food security. Secondly, greater production volumes allowed rights-holders to bargain and achieve better prices for their products when approaching the market or engaging with middlemen.

Global and regional advocacy related to livelihood and trade received less attention than planned in the current period. Advocacy efforts were instead directly targeted at local and domestic processes. Limited advocacy results on a global level can be explained by lack of staff and partner capacity to follow and influence international processes.

Like the Resources and Finance programme, the Livelihood and Trade programme has proved to be a successful platform for sharing programme experiences and methodology between NCA staff across country contexts. This inspired new projects and results achieved on market access for example and has contributed to developing a global programme.

OUTCOME 1: Rights-holders are organised to secured sustainable livelihoods in rural and urban environments

Achieved in Afghanistan, Brazil, Kenya, Myanmar, Palestine, Somalia, Sudan, Tanzania and Zambia where rights-holders improved their livelihoods and increased their income through organising in savings and loans groups, farmers’ cooperatives and associations.

Achieved in Afghanistan, Palestine, Somalia, and Tanzania, where the establishment of small-scale enterprises increased the income of women and youth.

Not fully achieved in Somalia due to weak government structures and lack of space to influence the legislative agenda. Results achieved relate to extensive awareness raising at community level on legislation to protect fishermen from piracy.

Not fully achieved in Southern Africa and Kenya, but some progress seen in Kenya in relation to coffee sector.

With the exception of Brazil and the Brazilian-Norwegian advocacy efforts targeting Norwegian soy company Denofa, this has not been a focus in 2015. In Brazil continued advocacy meant that Denofa has recognised the need to invest in sustainable solutions for soy production.

OUTCOME 8: Targeted duty bearers are influenced to develop or comply with land rights for marginalised and vulnerable groups

Achieved in Tanzania and Zambia through women and indigenous communities securing ownership of land and the return of previously confiscated land to rural farmers. Zambia partners influenced the revision of the Urban and Regional Planning Bill of 2015. Not fully achieved in Myanmar where results are only evident on output level.

OUTCOME 9: Targeted duty bearers are influenced to develop or comply with national legislation and international standards for sustainable livelihood and economic justice

Only targeted in Zambia, where results on outcome level were realized, e.g. tax proposals from NCA partners on removal of customs duty on greenhouses and rose seedlings was included in the national budget.