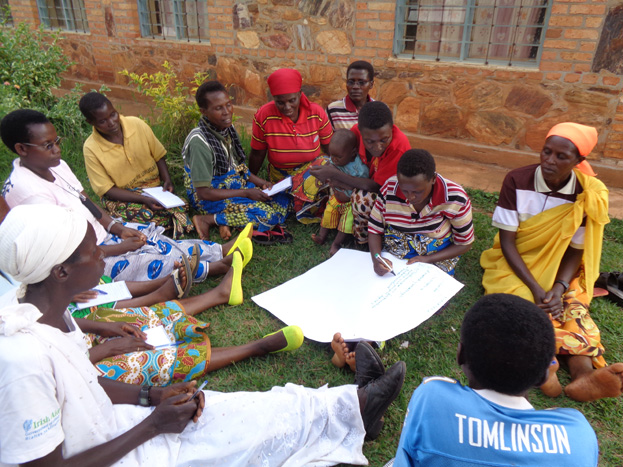 6. According to ACT Humanitarian Policy, protection activities can be responsive, remedial or environment building. Responsive action is immediate action to stop or prevent abuse or its recurrence and/or alleviating immediate effects. Remedial action is assisting people to recover from the effects of abuse and avoid secondary abuses.

Overall goal: Women and girls are protected6 against gender-based violence (GBV) in conflict situations, and participate actively in peacebuilding initiatives

NCA has provided direct support to almost 7,200 GBV survivors in 2015, and contributed to increased participation of women in local level peacebuilding in target areas. The majority of survivors who received support report feeling safer in their home or better able to deal with trauma as a result of the support received. The NCA’s Women, Peace and Security programme was implemented in the following countries in 2015; Afghanistan, Burundi, DR Congo, Palestine, Somalia.

United Nations Security Council Resolution (UNSCR) 1325 on Women, Peace and Security obliges all UN Member States to prevent and protect women against GBV and to promote the participation of women at all levels in peace processes, as well as in peacebuilding and in conflict prevention. In Burundi, obstacles to women’s participation in peacebuilding includes their limited role in day-to-day decision making, prevailing attitudes that permit GBV, and duty-bearers’ lack of knowledge or commitment to address these issues. In an effort to address these barriers, NCA has been coaching women on advocacy using an evidence-based approach, where women themselves identify their needs and develop their own advocacy strategies around the issues identified.

7. REFLECT is a participatory education programme whereby rights-holders learn, through literacy and numeracy training, about their rights and responsibilities, how to identify their problems and discuss possible solutions. Participants who form REFLECT “circles” are empowered to dialogue with duty bearers in an effort to claim their rights.

NCA has increased the capacity of local civil society through continuous training of partners in how to facilitate women’s reflection on their rights and needs through REFLECT groups7, and on how to facilitate dialogue sessions with local authorities. Over the last years, NCA and partners have raised awareness about GBV among duty bearers, ranging from police and law officers to local administrative and religious leaders, inviting them to dialogue sessions with the women and implementing actions to protect women and increase their participation in decision-making structures. In 2015, after having participated in dialogue sessions, 52 key leaders have committed themselves to implement at least one recommendation to reduce GBV. This represents 86.5% of all duty bearers who participated in NCA and partner-facilitated dialogue.

WHY: Women in Afghanistan have generally little access to provincial and national peace processes in conflict areas, meaning their concerns are seldom heard.

WHAT: Strengthening the capacity of women in peace committees at community and district levels, while at the same time engaging provincial and national authorities on the role of women in peacebuilding with the dissemination of UNSCR 1325.

The programme promoted women’s participation in peace processes through the establishment of community and district-level women’s peace committees/Shuras (DWPS) in a society that does not provide women with a role to play in peacebuilding processes and largely ignores their participation in broader society. In 2015, the membership of nine established DWPS, increased by 57 new members (from 245 to 302). The women received training in peacebuilding, conflict resolution, communication, and advocacy.

The pre- and post-training questionnaires showed significant increase in knowledge and understanding by the new members. In the reporting period, the members of the DWPS developed 40 local action plans on UNSCR 1325 implementation in addition to solving 45 family conflicts and 40 community-level conflicts over issues such as irrigation water, land disputes, pasture grazing rights, and inter-tribal conflicts. A key initiative was to connect DWPS at community and district levels with provincial and national level formal and informal peace structures as well as national authorities.

Such a visit took place in December 2015, when a group of women representing the DWPS from seven districts in Faryab met with senior officials of the High Peace Council (HPC), Afghanistan National Independent Peace and Reconciliation Commission and Ministry of Women’s Affairs (MoWA) in Kabul. The group also met separately with a former Taliban official. The authorities were appreciative of the work NCA and its partners have been doing to assist women to engage in peace processes. The HPC acknowledged the importance women have played in Islamic history and promised to support the women’s peace initiatives in Faryab.

During the meeting with the MoWA, DWPS members presented their specific recommendations and suggestions for cooperation between the MoWA and DWPS. The MoWA showed their willingness to explore synergies between DWPS initiatives and formal peace structures. The Afghanistan Peace and Reconciliation Commission leadership was pleased to be connected with the DWPS and affirmed that: “We have representations in only 10 provinces of Afghanistan, and Faryab is not one of them. Therefore, we can support each other while solving conflicts and dealing with issues of involving women in peace processes.”

Because of such high-level recognition, the women are further motivated to work with and participate in peacebuilding processes. On a similar note, for the first time ever, women from a district in Daikundi were able to meet provincial authorities and discuss their challenges with them. With NCA’s active support, the DWPS advocated for women’s inclusion in Provincial Peace Councils (PPC) and as a result the governor of the province promised to appoint two female members from a DWPS to the PPC, which did not yet have female representation.

WHY: Women who have been sexually violated are often left to care for themselves. Dominant social norms and attitudes promote violence, while the prevalence of rape and sexual violence increases during conflict and is used as a weapon of war.

WHAT: Further training of 86 health workers in psychosocial care of trauma survivors and of 250 community health workers in mental health care and support. Two transit centres in Goma and Bukavu provide medical assistance to women and girls with fistula as a consequence of brutal rapes.

DRC has experienced a series of conflicts over recent years and as a result many people have been exposed to sexual violence and other types of human rights violations. Following the recommendations of a 2015 evaluation of NCA’s mental health programme in DRC, more systematic training of healthcare providers on the psychosocial support they offer trauma survivors has been provided. More specifically, from 2015 a second community health worker will be trained in each target health zone to ensure the sustainability of the service they offer. Two-hundred and fifty of these workers were trained in 2015 in: 1) How to identify survivors in the community and refer them to the mental health services, 2) How to raise community awareness and understanding of mental health issues and 3) Community care and treatment of survivors using techniques such as group therapy.

Religious leaders and practitioners of traditional medicine were included in the training for community health workers, as the evaluation showed that they were influential in their communities. This was an important step as mental health issues are often viewed as spiritual problems, such as demon possession. As a result of this training, 30% of health centres now have at least two staff members who have passed the test in first response care to trauma survivors. In 2016, a new group of community health workers will be trained in new target areas.

Other key results from the programme in 2015 include an increasing number of women working together with local authorities to create change in their communities, particularly in relation to GBV and mental health issues. This comes after voicing their concerns to the authorities during community dialogue meetings. Survivors have gained the self-confidence and the skills to speak in front of large groups through participation in the programme’s literacy-based empowerment initiative. NCA also supported the Provincial Health Inspection agency to monitor health workers and the mental health programmes in 13 health zones.

In 2015 NCA saw deviations in its programmes in Sudan and Somalia. In Sudan, restrictions from the government made it impossible to implement the programme as planned. Whilst progress was made in Somalia, work to encourage women’s participation in peacebuilding and influence duty bearers to implement UNSCR 1325 was limited in scope and few higher level results were documented.

Throughout the 2011-2015 strategy NCA has achieved increasingly better results as regards to women’s participation in local peacebuilding. A combination of interventions was key to this success: empowerment of women and women’s associations at the grassroots; capacity building of duty bearers; and facilitation of dialogue between women and respective duty bearers. In 2015, two developments in the programme were evident. First, economic empowerment has been increasingly emphasised and is now bearing fruit. Secondly, initiatives were carried out both in Burundi and Afghanistan to link local and province level achievements more strongly to the national level. While promising, these initiatives will need to be closely followed up in NCA’s new strategy.

Achieved in Afghanistan, while not fully achieved in Sudan and Somalia. NCA contributed to build women’s capacity to participate in peacebuilding processes in all contexts.

Achieved in Burundi and DRC through a combination of support to women’s associations, literacy and numeracy training fused with civic empowerment, support to income generating activities and facilitation of dialogue with relevant authorities, mostly at local level.

OUTCOME 3: Duty bearers have been influenced to implement UNSCR 1325 and related resolutions

Achieved in Burundi and DRC, while not fully achieved in Somalia and Sudan. In most countries results have been obtained through capacity building of authorities and security forces, combined with support for dialogue, public advocacy from rights-holders, faith-based actors and women’s organisations on the issues most relevant in each context.

Achieved in Somalia, where the environment for protection of women and girls in IDP camps improved as a result of sensitisation, continued use of patrol groups and referral systems for GBV survivors in combination with provision of solar lamps for lighting in unsafe areas.

Achieved in DRC, Burundi, and Somalia through holistic and direct support to GBV survivors (legal, medical, psychosocial and/or shelter).