From waste to value

Plastic is one of the world's biggest environmental problems, with as much as 160 million tonnes of plastic ending up as rubbish every year. Many of the world's poor countries have understood this, while we in Norway use plastic as never before. 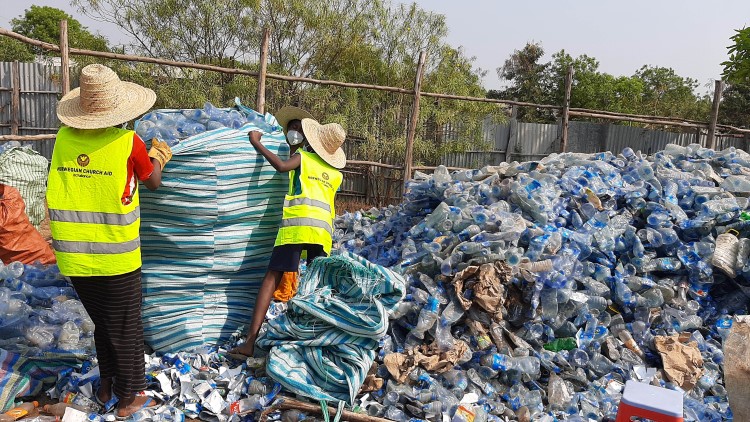 In Africa, as many as 34 countries have introduced a form of ban on plastic bags, yet the continent is flooded with plastic rubbish. This creates a lot of pressure on the environment and creates more hygiene challenges. In Ethiopia, Norwegian Church Aid has established a large recycling project, "Value 4 Waste", which creates jobs and helps to build bridges between refugees and the host community.

Norwegian Church Aid is responsible for water, hygiene and sanitation in two large refugee camps in the Gambella area, on the border with Sudan. In the camps, some refugees have work and income by clearing rubbish, but in Gambella there was a lack of a good and sustainable rubbish management system. The community around the refugee camps often finds it stressful to have a large number of refugees gathered in one place, and many are annoyed that the refugees receive help when they themselves live in absolute poverty. This is often a root cause of conflict and mistrust. Norwegian Church Aid wanted to try to do something about it.

This project creates joint jobs and cooperatives between the refugees and the host community of Gambella.

- A partnership between the refugees and the local community created a place to talk, negotiate and find solutions to their problems. This encourages peacebuilding in the region, where clan structures permeate both the cities and the camps, says Norwegian Church Aid's local project manager Bethelhem Meselu Endalew.

REMOVE THE PLASTIC - GET CONTRACTORS

A refugee camp is initially unsustainable. Thin plastic bags are widely used to distribute food and products the refugees need. These same bags become a problem because they are taken by the wind and end up in trees and rivers. Food, water and other necessities of life are distributed to the residents in plastic jugs and metal boxes that are not recycled. Thus, the camps face major challenges with garbage. Not only is this problem bad for the environment, but the rubbish heaps are perfect for the malaria mosquito to breed. This also makes them a health challenge.

The project started with removing the thin plastic bags that are not recyclable from the market. Not only did the garbage problem become smaller, but it provided an incentive for refugees who wanted to make money.  Entrepreneurs redesigned reusable bags from the thicker plastic bags used for packing other goods and sold them as shopping nets, says Endalew.

Canned food is handed out daily, but without an organized handling system, the boxes were often left as rubbish. Metal is, just as paper and plastic, something that is saleable and easy to recycle. We initiated a collaboration between the food distribution organizations and a recycling company. Now the refugees hand in the empty cans as collateral to get new ones. Thus, the boxes go for recycling, and we prevented the canned goods from being sold in the secondary market.

On the African continent, jerry cans are used to fetch and store water. The jerry cans are recycled, and the refugees already made money selling used jerry cans. These jugs are therefore omitted from the garbage project; as we didn’t want to destroy a system that already works, Endalew explains.

While the jerry cans were sold to the big city, salvaging plastic bottles became a bigger problem. The informal collection of plastic garbage in the camps did not include the plastic bottles as it was not profitable to collect. Plastic waste is paid per kilo, and as the thin plastic in the bottles has a large volume and low weight, and with 80 km to the nearest delivery point,  it was too expensive to transport the plastic bottles for recycling.

Norwegian Church Aid entered into an agreement with the Swiss recycling company COBA Impact Manufacturing PLC in Addis Ababa, which receives all the waste. Through this partnership, Coba Impact lends a pressing machine to the cooperatives, which presses the bottles together into large plastic bales so that they can be easily transported. Norwegian Church Aid provided areas where the bottles could be temporarily stored. The garbage is transported out of the camp in the empty lorries that transport food and other necessary items into the camps.

FROM MALARIA PROBLEM TO CHANGES OF ATTITUDES - A COMPREHENSIVE PROCESS

Norwegian Church Aid started with an awareness project among refugees and local communities to better understand the connection between the garbage problem, diseases, and environmental destruction. At the same time, we wanted to raise the status of those who handled the garbage, who were often seen as the lowest on the social ladder. - It is a long process to remove the stigma, but we are seeing a change in attitude. In the past, they were often harassed, now they get to work in peace, Endalew says.

In some of our project we have as a principle to provide competence, training, systems, and start-up assistance - so that you can find your own way out of poverty. The project then quickly becomes sustainable, and we can pull out. When working with refugees, the model creates additional challenges as many have fled headlong, and they lack identity papers and have fewer rights in society. When you do not have identity papers, you do not get a bank account and thus no money in the account. At the same time, it is important to avoid cash to have the best possible control over cash flow. - Our people sought out the authorities and the banking industry at all levels to give representatives from the cooperatives access to the refugee camps. and to give the refugees access to a bank account so that they could run the business in a normal way, says Endalew.

Waste and waste management has value and creates several positive ripple effects in society. We are now looking at upscaling the "Value 4 Waste" project and helping more areas to put in place an infrastructure for waste management.

Through your support, you contribute to knowledge and attitude change, create income and jobs, contribute to a cleaner environment and take care of wildlife.

Watch film from the project hereThrough your support, you contribute to knowledge and attitude change, create income and jobs, contribute to a cleaner environment and take care of wildlife