1.1 Level of influence on duty bearers, to increase finance for and spending to reduce poverty and inequality

The purpose of this indicator is to measure the effect and progress of our influencing strategies, as the aim of this sub-goal is to influence duty bearers to make decisions and act to reduce poverty and inequality. The indicator is a progress indicator based on assessments of several parameters, to determine which level of influence we are at where level 1 is the lowest and level 5 is the highest level. The higher levels of influence measures impact and outcomes, while outputs are measured at all levels.

This indicator is dependent on a thorough baseline analysis, which must be reported against on an annually basis. The indicator should tell whether NCA and partners have chosen effective influencing strategies or if we should adjust the advocacy strategies to increase our influence. This indicator depends on the context we operate in and contextual analysis will also have to be carried out annually, as changed context will reinforce or reduce the possibilities to increase levels of influence.

Categorisation of Levels of Influence 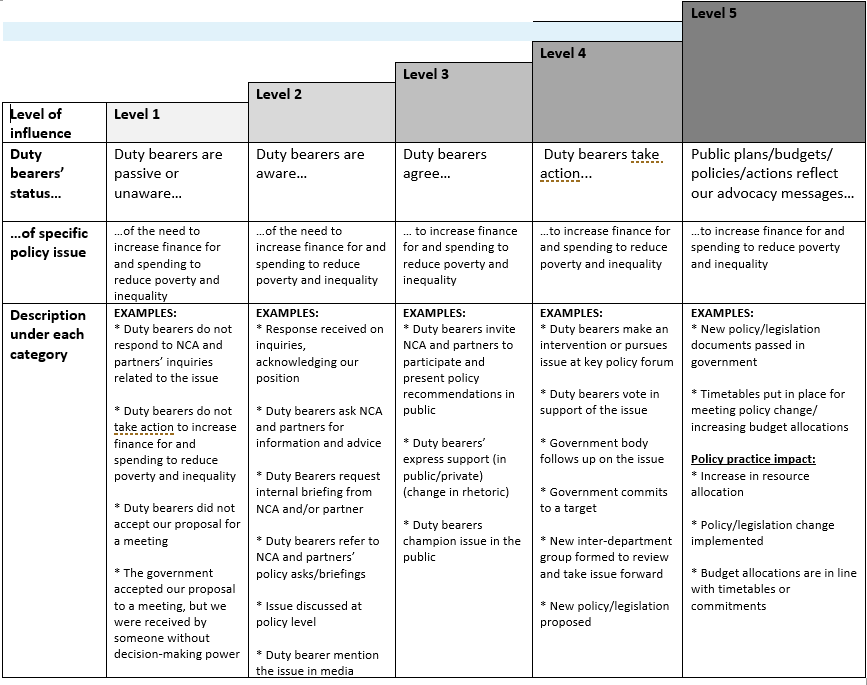 To measure progress, the above described analysis must be repeated regularly. Fill out the “ladder” describing level of influence, and compare to baseline/previous years’ analysis. Progress is made if there are signs of increased influence on duty bearers, according to the indicators describing each level of influence (the ladder described above). Progress is made if e.g. the duty bearer is more aware than before of the issue at hand, if duty bearer did not earlier talk about the issue at hand, but now publicly discuss the issue, if duty bearer starts to engage other duty bearers on the issue etc.  If the intervention is effective, we should expect the levels of influence to increase over time: