Who says that illiterate females from a place outside the power grid can't assemble solar panels and provide a whole village with electricity from renewable energy? 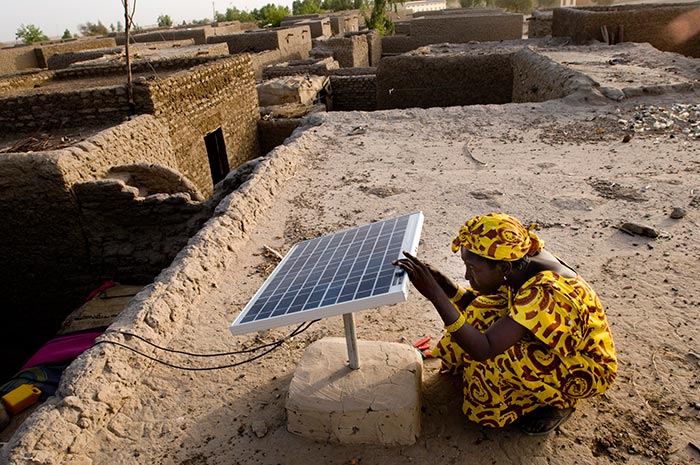 Timbuktu, the legendary ancient city by the Sahara Bank is for many synonymous with the world's end. The outermost desolate, inaccessible. There is no place in the world that is further from home. For four women in the villages Tindjambane and Tassakane, Timbuktu was also the world's end. With the exception of one, none of them had traveled further from home than the 24 kilometers to Timbuktu.

The first time Assetou Mahama Cissé heard the name "India", was when she was elected by the General Assembly in her village to go to the country with the same name to learn the art of creating light at night from the sunlight in the day. She said yes.

- I was a little scared. I did not know how I should talk to someone who neither understood Tamashek or French, Assetou said.

Sunlight is one of the few resources that the population on the border to Sahara has plentiful of. Sunlight so strong that it is at the limit of what people and animals can survive. Forcing everyone to take refuge in the shade during the hottest hours of the day. Residents of Tindjambane and Tassakane lives of animal husbandry, agriculture, and the sale of handicraft.

It provides a small surplus to buy the most necessary goods on the market in Timbuktu. A large part of the economy is for many locked into the purchase of fuel and battery charging. The idea that the sun could free them from this expense was amazing.

- We provide advice and participates in decision making. We are more involved and respected because of what we can do, says Assetou Mahama Cissé.Electrification has not only brought practical and economic solultions. There are now four women in the villages Tindjambane and Tassakane who is always consulted when important decisions are taken.

The four engineers agree that they are happiest at home. They do not miss India. But they would have liked to visit the other West African students from the class. Sometimes, Assetou Mahama Cissé calls the women from Sierra Leone, just to talk. Then the conversation is in their common language, Hindi, of course.

The idea of the World's end change for those who go there. Such as the idea of the impossible changes for the one who makes it possible.

- Sometimes people traveling at night and see the lights of Tassakane, believe that they have come to Timbuktu, the engineer smiles.