NCA South Sudan has kicked-off the first Cash and Voucher Assistance (CVA) pilot project ever in Country Office in Gumuruk. The project is integrated with Emergency WASH and GBV projects as an approach to provide Hygiene and dignity items to conflict affected host and Internally displaced communities. 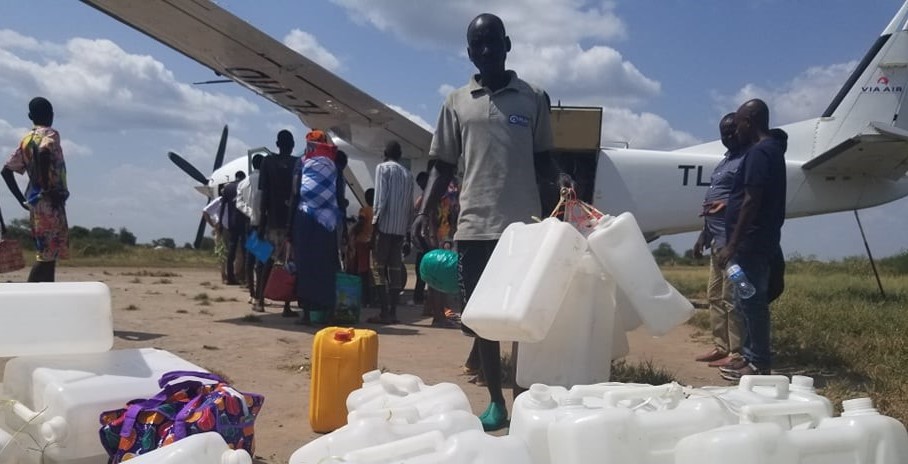 NCA South Sudan office has started Cash and Voucher Assistance (CVA) project in Gumuruk county this week, to address one of the pressing needs of conflict-affected host and Internally displaced Communities: Hygiene and Dignity Items.

Gumuruk county is one of the most conflict affected areas in Greater Pibor Administrative area, Jonglei state. This caused extensive damage on public water supply schemes, community livelihoods, looting of cattle and flattening the whole town including the market area. After the end of the worst conflict, which was in June 2020, Gumuruk was left with nothing. This was also when NCA's compound was destroyed. Another crisis also happened in May 2021 while the area was trying to recover from the last attack.

Despite the challenges of the security, Norwegian Church Aid (NCA) has continued to support the community in all the best viable ways since the first intervention in 2014. More focus has been given to improving the water supply coverage coupled with awareness creation on personal and environmental hygiene, Gender-Based Violence, and Peacebuilding.

This time, following the positive outcome of the feasibility assessment, NCA started to carry out the Cash and Voucher Assistance (CVA) pilot project to create free and dignified access to hygiene and dignity items for the most affected and vulnerable members of the community while helping the local economy that has been severely affected by the conflict.

Prioritising families that need help the most

The Pilot project will benefit 133 households out of 1889 registered Households. The selected beneficiaries have been prioritized according to the agreed beneficiary selection criteria guideline which was approved by the Commissioner (Head of the county) and the village chiefs. The guideline gives priority to households with big family size, number of children under 5, number of females of reproductive age, number of people with disability, number of people with critical illness, etc.

The beneficiaries have been provided with an electronic e-voucher card that is top-upped with different amounts of money according to identified household needs.

Supporting beneficiaries by monitoring the market

The cash and voucher market launched on Monday this week and the beneficiaries started to access whatever they need whenever they want it using their e-voucher card from the same market that they used to buy.

In total, 36 hygiene and dignity items have been identified through our need assessment and included within the system. The maximum price of each item has been fixed in prior agreement with the vendors, but they can do any discount to attract more beneficiaries. This is to maintain the natural market computation and to give bargaining power to the right holders.

Six trained market facilitators monitor the market throughout the market time. The role is to provide support to the beneficiaries whenever they required it and to receive complaints and feedback.

Eight local vendors agreed with NCA South Sudan and were trained to sell the identified hygiene and dignity items through the digital system. Accordingly, they have supplied their shop using their chartered flight from Juba before the CVA market start-up. Now they are busy with their customer in a motivated market!

This is Adoch Logocho Oleyo, age 32. She lives with eight of her family members and she is one of the communities affected by inter-communal conflict in Gumuruk Greater Pibor Administrative Area. She lost everything she had before the crisis in May 2021 conflict which destroyed her community in Gumuruk County of GPAA. Since inter-communal violence erupted in May 2021, she has never had any hygiene kits to support her during menstruation period as she has lost all her belongings, including Household assets that were looted and cattle were raided during the process.
‘"The situation is terrible once someones menstruation is starting and there is nowhere to get reusable sanitary kits. Today I am so excited because I have collected hygiene items using my e-voucher card and that definitely will help me manage my menstrual hygiene as before".

Pictures from the market