Climate change hits some so much harder. 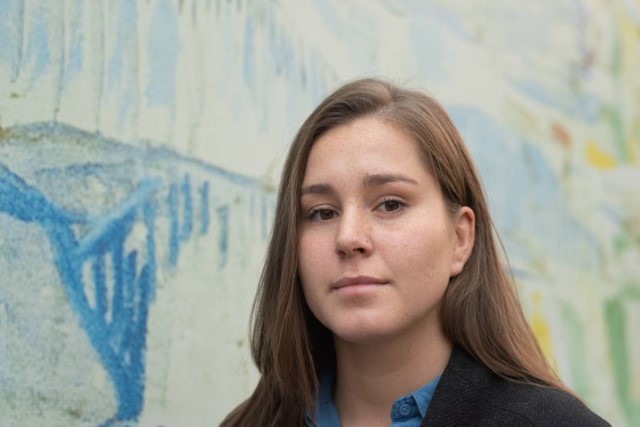 Naja Amanda Lynge Møretrø is the leader of Changemaker and will for two weeks be in Glasgow for COP26  (Photos by Giulia Troisi).

This summer, she took over as leader of Changemaker. Her name Naja is from Greenland and means «little sister». Many years ago, her grandmother, who is one of the indigenous people in Greenland, met a Danish man.  After Naja's father and siblings were born, the family moved to Denmark. In Kristiansand's largest district Vågsbygd, Naja grew up with Danish-Norwegian parents, knowing about her roots in the Lynge family in Greenland.
- There is probably a personal reason why I am so concerned about how climate change hits some so much harder. Indigenous peoples are very vulnerable to climate change and the devastation it causes. They have used nature in a responsible way for hundreds or thousands of years, and now they are starting to lose their way of life because of other`s actions.
Changemaker is Norwegian Church Aid's youth organization for young people between the ages of 13 and 30, with different views on life and political views.  Changemaker works creatively and politically to eradicate the causes of injustice and poverty in the world.

During the COP26 over the next two weeks, Møretrø will speak both formally and informally with Norway's climate negotiators, the civil society from Norway, and the global south.
Two years ago, she was in Madrid to influence the previous climate conference, then as a member of Changemaker's climate policy committee.
- Yes, it is complicated, but if you want to have a real impact, you have to learn it. Even though we were in our early 20s, we were able to be taken seriously. In that sense, we are lucky. Norway has a strong civil society and many formal channels for influence. In Glasgow, we also have informal opportunities for influence. We will have dinner with the negotiating delegation. If we know what they are talking about, they listen and are very open to suggestions. Then we can actually be involved and make a difference.

What made the biggest impression on Møretrø in Madrid was several heads of state sitting around a large table. They take turns talking about their contributions and present their different views. Norway's Prime Minister at the time, Erna Solberg, talked about electric cars and green technology.
Eventually it`s the representatives from Honduras and Malawi`s turn to share.  They talk about how the climate is changing their lives already now. They are unable to cope with the changes because they have a deep debt crisis.
Møretrø sits and listens. Electric cars and green technology are only surface issues. Below lies deep problems that no one really dares to problematize.
- Climate change is not just something that happens in the atmosphere. It is about the fact that some countries have emitted a lot of greenhouse gases, and others suffer the consequences.  It is the poor that are paying the price. We forget this a bit here in Norway. While we talk about electric cars and petrol prices, we forget who is hardest hit, says Møretrø.

An important issue at the Glasgow summit is climate finance. Some believe the question is one of the most difficult, and at the same time a key for poor countries to be willing to join agreements.

According to the Paris Agreement from 2015, industrialized countries should provide 100 billion dollars in annual contributions to developing countries from 2020. With this money, developing countries should have a better chance of coping with climate change that is already causing damage and problems, and also to provide clean energy and to cut emissions.
At present, the industrialized countries are $20 billion a year in arrears. Before the weekend, Canada and Germany outlined a plan to reach the goal of 100 billion dollars by 2023. The Norwegian government announced before the weekend that the Norwegian contribution will be increased from 7 to 14 billion kroner by 2026.
The government will also use the new climate investment fund to trigger investments in renewable energy in developing countries, and thus get a faster phasing out of coal. The goal is for private investors to contribute nine times the amounts that the climate investment fund contributes.
Norwegian Church Aid and several organizations received a report in 2018 that calculated what Norway's fair share of climate financing should be, including the historical responsibility Norway has as a country that has profited greatly from oil and gas. The report concluded that NOK 65 billion a year is a fair contribution from Norway.
- I believe that we will be able to do it.

While researchers warn that the world has no feasible way of achieving the goal of limiting global warming to 1.5 degrees, Møretrø does not walk around fearing for the future.

- What gives me a lot of hope is that we still have a chance to turn the situation around, but that we only have that chance for a few more years. We must do it before 2030 according to the UN Climate Panel. I believe that we will be able to do it, says Møretrø.
- What do you think is realistically possible to achieve these weeks?
- I think it is possible to change the political climate so that when participants go home from the conference they agree that they will actually make the effort. Technically, I think we will land with the last part of the Paris Agreement, which is about the quota market, we just have to finish it.
- If it does not go quite as hoped, will you continue to work tirelessly?
- Yes, I absolutely must. There will be a climate summit next year as well. But just this year, it's actually a little special. Many say that this is the most important climate summit since the Paris Agreement in 2015, also because the meeting was canceled last year. The world has some new politicians and a more engaged United States. 2030 moves closer, but I have high hopes that Norway does its part, says Møretrø.