Dr. Denis Mukwege in Oslo: "Corruption and impunity destroys everything"

Nobel Peace Prize winner Dr. Denis Mukwege is a gynecologist and human rights activist from the DRC. Last week he met with NCA`s Secretary General in Oslo to discuss what is happening in his country right now. 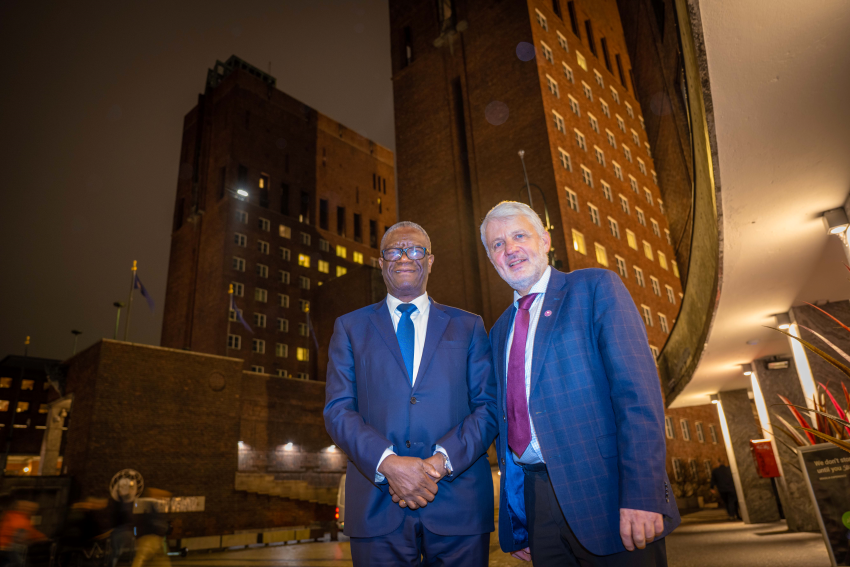 Nobel Peace Prize winner Dennis Mukwege is deeply concerned about the humanitarian situation in the Democratic Republic of Congo. Every day people are killed and abused, and many are at risk of starvation.

- The people must come together to create peace and rebuild the country, he says.

Eastern Congo is ravaged by dozens of armed rebel groups. Since last October alone, hundreds of thousands of people have been displaced in the province of North Kivu. The reason for this is the aggressive rebel group M23, a group consisting of Congolese Tutsis, which Congo believes is in league with neighboring Rwanda.

In addition, more than 27 million people are at risk of acute food insecurity in the country. That corresponds to about a third of the country's population.

RAPE AS A WEAPON

The means used by the rebel groups are often brutal. Rape, torture and abductions are used extensively. Nearly six million people are now internally displaced within the country.

- In war and conflict, the number of abuses against the civilian population increases drastically. We see that clearly in the hospitals in the areas affected by the unrest, says Denis Mukwege.

He is a gynecologist, a human rights activist, and the Head of Panzi Hospital, which is a hospital in Eastern Congo that specializes in receiving and treating women who are victims of sexual violence. Through his clinic in the city of Bukavu, he has helped tens of thousands of women with injuries after rape. In 2018, he was awarded the Nobel Peace Prize together with Iraqi Nadia Murad for the fight against sexualized violence in war.

Last week he was in Oslo where, among other things, he met with NCA`s Secretary General, Dagfinn Høybråten.  NCA has collaborated with Mukwege and supported his work ever since 1994 when he was working out of a mobile hospital that treated women with injuries after war rape. With the help of forces from Norway, among others, he was able to build the Panzi Hospital and founded the Panzi Foundation in 1999.

Unfortunately, rape is still a major problem in eastern Congo and is part of the way armed groups terrorize the population. NCA works to combat sexualized violence is one of our organisation's three most important work areas, both with prevention and providing help for those who have experienced it.

Mukwege believes that new institutions, military and police forces must be put in place to create peace in the country. The population must also gain more knowledge about the importance of democracy and their own rights and it is crucial to have a legal system that fights corruption and impunity for crimes.

- Corruption and impunity destroys absolutely everything. Therefore, we need leaders who show the population with integrity what needs to be done and who believe in the country and a democratic solution. There is a great need for education and strong forces that contribute to rebuilding the country, says Mukwege.

In what way must civil society contribute to this?

- If the population does not understand what a democracy is and are encouraged to vote, then they will not vote even if this is about their future. Civil society, aid organizations and religious denominations are also important for creating peace in the country, says Mukwege.

How has the Nobel Peace Prize contributed to the fight for peace and democracy?

- The Nobel Peace Prize has given us a platform where our voice is heard and we have brought to light how women are affected by sexualized violence in war.  Unfortunately we have not yet managed to create peace in the country, says Mukwege.

Dagfinn Høybråten says Mukwege's appeal to the international community must be heard.

- There will be no lasting change without peace, and no lasting peace without justice. NCA stands together with Dr. Mukwege in the fight against gender-based violence and for peacebuilding, says Høybråten