Getting girls back to school

In close collaboration with our faith-based partners in Ntchisi, NCA are getting girls back to school, working to stop child marriage and raises awareness about HIV. 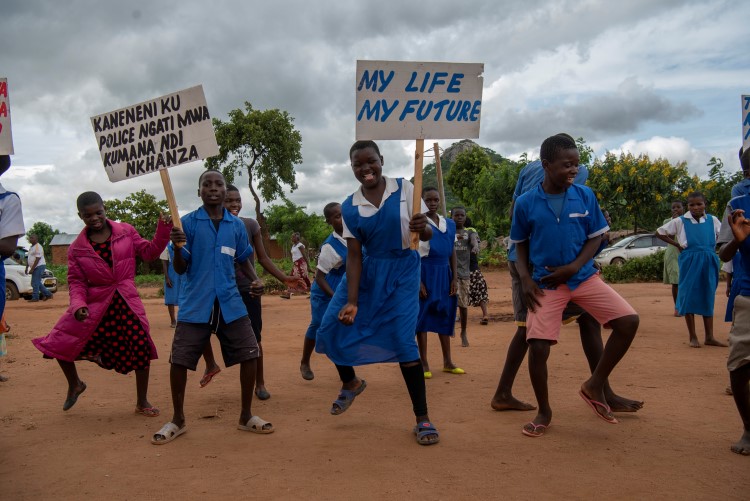 Getting girls back to school​

We hear them from a long distance. Laughter, cheering and cheers as the music flows out of large speakers. As we approach, we see girls in blue dresses holding posters while dancing. Others are running around the square with yellow vests to get the ball in the basket.

For many years, we have taken new paths to prevent teenage pregnancies in Malawi and increase access to health services for young people. So far, we have reached over 370,000 girls in seven districts.

"We are now in the third phase of this program and have worked in Ntchisi since 2015. One of the success factors for this program is that we have had the opportunity to work over a longer period", says Håvard Hovdhaugen, NCA's country director in Malawi.

Together with local communities and our faith-based partners, the goal has been to stop, slow down and prevent child marriage and dropout in school.

Together we have worked systematically through groups where the girls learn about family planning, their bodies and to invest in school instead of getting pregnant and married early. One of the ideas has been to use ball games and other fun activities to make the groups more attractive.

An opportunity to talk with the girls

"To find good ways to talk to the girls, we have introduced netball and dance", says our health coordinator in Malawi, Dunia Phiri Mphande.

She explains that they had to rethink information and prevention. Ordinary information meetings were of little interest. On the other hand, both netball and dance have been a great success. When the girls flock to the weekly events, all the professionals are in place. Ready to talk, inform and help.

"It has given us an opportunity to reach out to the girls and talk to them while they are doing something they think is fun", she says.

Netball is especially popular. There, the girls are divided into two teams. One team is called HIV, the other is called GBV (gender-based violence). Every time someone scores, they do a role-play. They must then say something about their own rights. Like "I say no to child marriage" or "it is important to use contraception". "We teach them how to stand up for themselves and to fight for their rights".

At the same time as we follow up the girls, we work in parallel with several preventive measures. Not least, we have close contact with the girls' parents. "We tell them about the importance of letting the girls finish school and get an education", says the health coordinator.

Although child marriage was banned in Malawi three years ago, it is still widespread and one of the reasons why girls drop out of school.​​

One of those allowed to continue in school is 16-year-old Promise Mwgle. The family had planned to marry her off, but thanks to the program, she can continue.

"Now I get full support from my parents to take an education. They understand how important it is that I finish school. I really enjoy school and do not want to get married". For 19-year-old Rachel Mkweam, the situation is different. She was married off as a young woman and had children early. Now she is alone, and life is tough for a single mother without schooling. But she is now a part of the program. "I have received practical training and now help at school. In addition, I have learned economics so that I can take care of myself and my child".

She is actively involved in the preventive work and uses her story to warn others.

She herself had to drop out of school when she became pregnant. "I definitely want to go back to school but will wait until my son gets a little older", she says.

During the years NCA has been there, there are several good results to report. The areas we have worked in have strengthened sex education and have better health services for young people. They now have easy access to help.

There has been greater openness about gender-based violence, contraception, and HIV prevention. It has also contributed to youth health becoming a topic for politicians, both nationally and at the district level. In phase one of the project, more than 60,000 girls received help, in the second phase, more than 20,000 received help, while in the third phase, the goal is to reach close to 8,000.

The number of child marriages has also decreased in the areas where NCA is working.