"I'm so proud to be a part of changing the world"

Meet Takondwa Phanga, one of NCA`s agronomists in Malawi. He has only one goal: to share generously of everything he can, so that small-scale farmers get out of poverty and hunger. 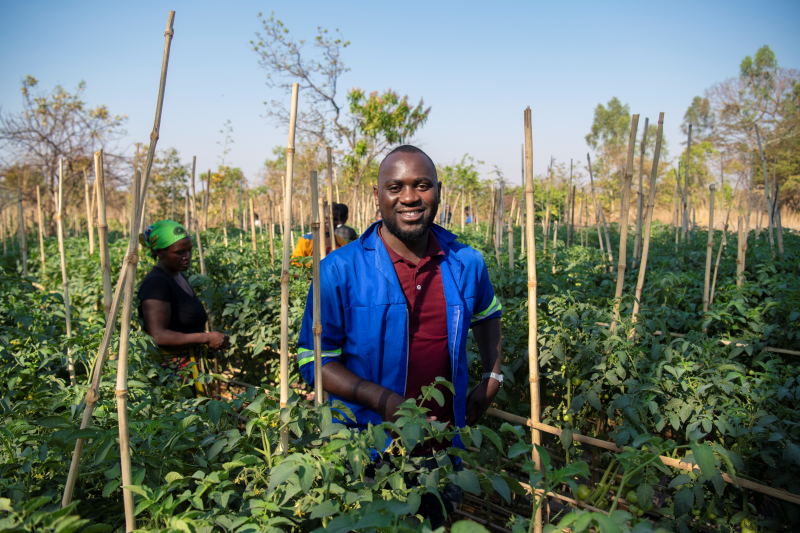 - Here you have to help the water a little further, says agronomist Takondwa Phanga as he brushes some soil away from the small hole in the water hose.

We are in the village of Chingagwe in Malawi, where twelve small-scale farmers are being trained in modern agriculture.

- I help small-scale farmers to raise the quality of the crops so that they can harvest more and at the same time increase their income, he says.

The project started in December 2020, and already a year later, the farmers have tripled their income. He himself is responsible for 17 other areas with similar training.

The goal is to get small-scale farmers out of poverty and hunger, at the same time as they develop as farmers.

The twelve farmers we meet today have invested in a set of quality seeds, an irrigation system and fertilizer. In addition, they learn good methods for developing their agriculture.

- My job is perfect for me. My passion is to help farmers develop so that they can get better results. Through my job, I can help make a difference.

Traditional agriculture creates great pressure on both land and water resources. The modern agricultural methods, which provide larger and safer crops on a smaller area and with less use of water, are inaccessible to small-scale farmers in the world's poorest countries. Both irrigation equipment, seeds and fertilizers are only sold in large quantities, the farmers lack education, and very few have a financial surplus for even a small investment.

With the new irrigation system the farmers have invested in, they avoid frequent trips to wells and rivers to fetch water. Instead, the farmers fill water in a bucket that is connected to two hoses. The hoses have small holes, so that the water trickles out and provides even watering of the vegetables.

Space in villages and gardens can often be cramped, which is why space utilization is also an important topic Phanga teaches. Instead of planting one row of tomatoes, they use the same space to grow two rows. They also get an introduction to which vegetables should be planted and stored so that they can increase their income.

- The farmers who are involved in the project have already earned enough to buy a chicken farm, school uniforms or send the children to school. They also have enough food for the whole family. We can also see that they are buying more land and expanding, he explains.

The agronomist sees a big difference after the farmers joined the project.

- The farmers wanted to grow vegetables anyway, but by participating in the project, they have absorbed new knowledge. They have taken this knowledge home with them and are further developing as farmers.

He also sees a change in everyday life. Farmers and their families now have good and predictable access to vegetables. They have increased their income and continue to invest. Before, they may have had no or little money, but now they have a stable income that provides nutritious food on the table every single day.

For the agronomist, it has been important since his studies to strengthen local communities. He has taken that basic idea with him into his profession. By strengthening local communities, long-term and sustainable change can be achieved.

- I am extra happy that I manage to inspire farmers to think big and look up. My message is that farmers need to become more visionary. Not just looking down into the earth, but opening up new ways of doing things and seeing new opportunities.

By traveling between 18 different communities, he follows the dream he had as a student.

- My goal is to make others see how they can change their own lives. As a recent graduate, I hoped to work for Norwegian Church Aid. Now I do, and it makes me so proud. The way Norwegian Church Aid works with local communities is so correct and important. I'm so proud to be a part of changing the world, he smiles.