Increasing our work in Syria

After ten years of a war that is not over yet, Syria is in ruins. 6.7 million people are on the run in their own country, and 13.4 million are dependent on humanitarian aid to survive. NCA recently opened a own office and we are working to upscale our work in the region 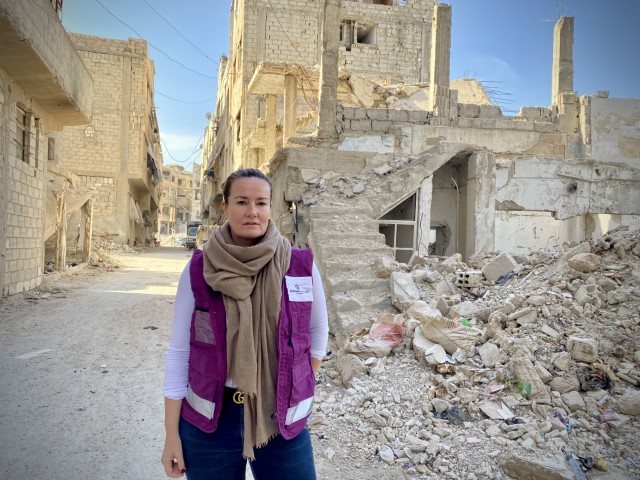 After the worst bombing in recent years, Syria has largely fallen out of newspaper columns and news broadcasts. And with that, a serious crisis often disappears from people's minds.

For the Syrian people, the situation and the acute need are very real. More than 400,000 people have been killed, many say the number is probably half a million or even more. The endless mounds of ruin stand there as constant monuments to the almost inconceivable suffering. And for the survivors, the nightmare is far from over. People lack food and water, health care and medicine, electricity and a proper roof over their heads. The Covid pandemic is raging, and the cold winter has long since settled.

- People basically lack everything. According to the UN, more than 90 percent of the population now lives in poverty, and there is unfortunately very little indication that the situation will improve in the future, says Benedicte Hafskjold, Norwegian Church Aid's Country Director in Syria and Lebanon (pictured above).

Norwegian Church Aid and our partners have provided vital help ever since the conflict and war began. With the establishment of our office in the capital Damascus at the end of last year, we are scaling up our work with, among other things, rehabilitation of damaged homes and schools, clean water and toilets, solar cell power, psychosocial help for children and support for victims of Gender-Based Violence. 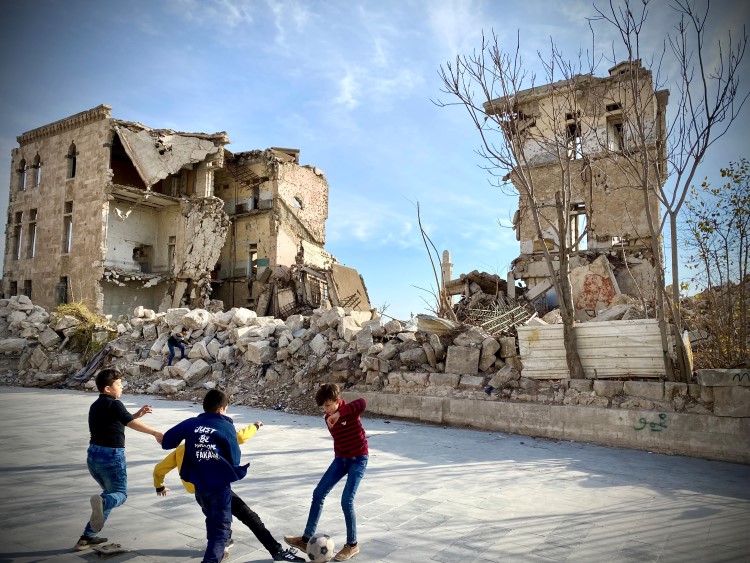 - For eight years we had to move from place to place on the run from the bombs. It was absolutely horrible and we were so hurt by our kids. When we were finally able to return, it was depressing to see that our building and apartment were almost in ruins, says the father of five, Maher (pictured below).

For several months, they lived with large holes in ceilings and walls and without windows and doors in the Harasta district of bombed-out Eastern Ghouta.

- See how nice it has become now, says Maher and proudly shows us around the apartment which is now fully rehabilitated by Norwegian Church Aid's local partner. Everything is sealed, and temporary plastic tarpaulins have been replaced with proper windows and doors. It still smells freshly painted in the kitchen when we are served a glass of safe drinking water straight from the tap.

- We had never been able to afford or manage this on our own, and we are so infinitely grateful for the help we have received: This is the start of a new and better life for our family, and not least I am so incredibly happy that our children can now lie down in the evening - in a dense and proper home with both electricity and water. 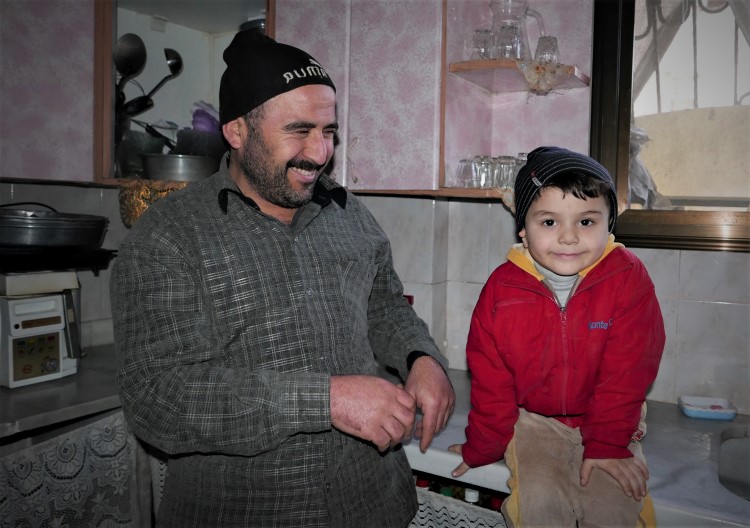 In addition to the enormous physical destruction, the psychological damage represents major challenges in a country where the war has ravaged for over a decade. And especially the children are hard hit. Nearly 5 million children have been born into the war, and the World Health Organization (WHO) believes that an entire generation of children have been injured as a result of years of extreme stress, which in turn causes problems with learning, behavior and health.

- So far too many children have experienced that close family members or friends have been killed or seriously injured. Children who have lived with fear of death, nightmares and trauma for years, says Ezza who works as an activity manager at one of the municipal centers just outside Aleppo, which is supported by Norwegian Church Aid (pictured below).

In addition to music, dance, play and fun as part of the psychosocial activities, several of the children also receive help with school work, especially those who have dropped out of the school system because they are struggling mentally.

- I'm here twice a week, it's a lot of fun. The best I know is to dance, but also to draw and paint. The adults here are very nice, and I have made new friends, says Amne (11) before she again throws herself into the dance with the other children. 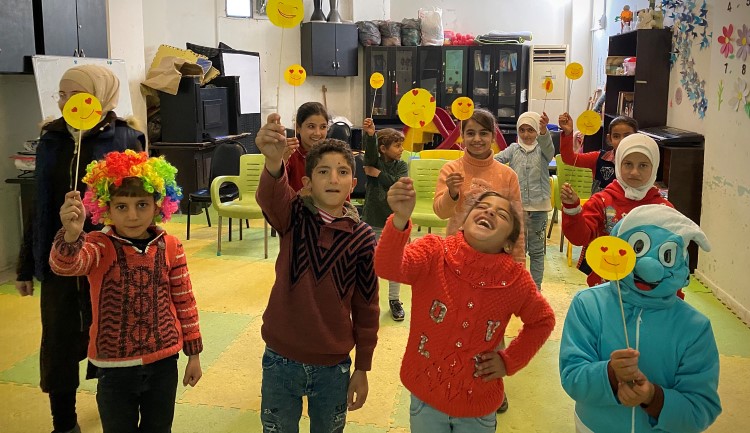 With sky-high unemployment and ever-increasing prices, many live from hand to mouth and with minimal faith in a better future. Barely two years ago, Ebithal (37) returned to the city of Safereh south of Aleppo. After patching up the small and ruined apartment with the help of friends, the divorced woman still sat in despair with her chronically ill brother - without income and with great trauma.

- I was completely devastated after all the years where I expected death at any time. We had nothing to live on, and I had no idea how we would manage, says Ebithal, who a year and a half ago heard about vocational training in machine knitting. With thorough training and a small start-up loan from Norwegian Church Aid's partner, she now treats the knitting machine like a pro, and together with six other women, they sell knitted children's clothes online with good results.

- I do not earn much, but enough to support both myself and my brother. Even more important is that I have regained faith in myself and the desire to live. I want to forget the terrible years and look ahead. I have a job to go to, I am proud of myself and have made good friends here at the center. I feel so lucky and hope that as many women as possible can get a second chance like the one I have been given, says Ebithal.

- For almost ten years in Syria, our cooperation with local partners has shown us where the need is greatest, and where help is needed most. Together, we have built up knowledge and expertise that provides the most effective and sustainable humanitarian aid possible. Since we established our own office at the end of last year, we are also upscaling our work to be able to reach even more people, says Benedicte Hafskjold and points out clean and safe water as a vital example.

- Together with our partners, we have secured millions of Syrians clean and safe water since the war began. And we continue to fully drill wells powered by solar power, rehabilitation of water pumps and piping systems as well as installation of water tanks. This is not just about providing vital water, but just as much about providing humanitarian aid so that such hard-hit people can once again live dignified lives.

Margrethe Volden, Head of Division for the Middle East in Norwegian Church Aid, and Father Meletius, leader of our partner GOPA / DERD, see another plant in full operation here (pictured below). 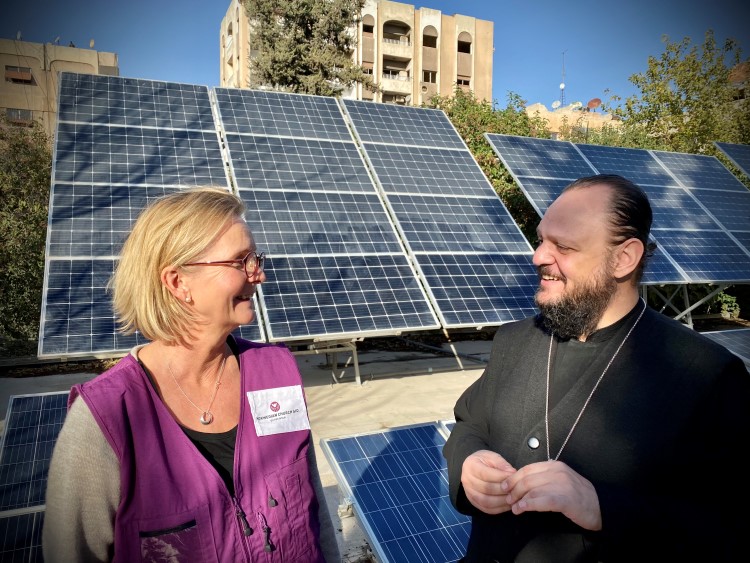