The Nobel Peace Prize has over the past two years highlighted two important issues that NCA works with every single day: hunger, and the freedom of expression. 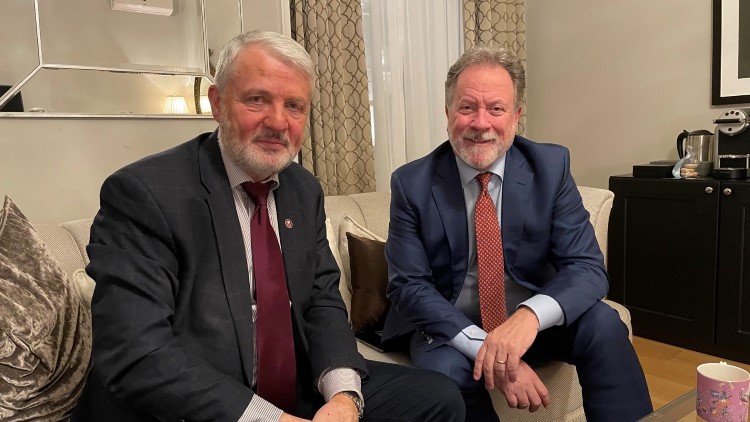 NCA`s Secretary General met with David Beasley, the Executive Director of the World Food Programme on the 9th of December, to give an update on the cooperation with NCA in several countries.
Photo credit: Daniel Rugholm, WFP.

The two leaders discussed the continued cooperation between WFP and NCA based on an update showing that the partnership has grown substantially over the last two years bringing WFP into the category of NCA´s most significant international donors.

Although enough food is produced for everyone, 811 million people still suffer from hunger. In one year, from 2019 to 2020, the number increased by 161 million people. This is mainly due to conflict, climate change and the pandemic. Almost ten percent of the world's population is starving.

"We share the concern of the World Food Program that the situation may get even worse in 2022. A new report shows that more countries are heading for a hunger crisis this spring", says Dagfinn Høybråten, NCA`s Secretary General.

At the same time as hunger is rising, food prices have also skyrocketed. Food prices are historically high and still rising. Many countries are now experiencing acute food shortages as a result of shortages of seeds and grains. Climate change, such as droughts and floods, means that nothing will grow, or seeds will be washed away. It hits the world's poorest hard. In several of the countries we work in, we now hear daily that hunger is severe, most recently in Burkina Faso, which is also experiencing an increase in terrorism and internally displaced persons. The fight against hunger must be intensified rapidly.

"We see a clear negative trend. Civil society is under pressure, and we experience that both employees and partners are harassed and receive more threats now than before. Therefore, we hope that both awards help to lift the work against hunger and against lack of freedom of expression," says Høybråten. 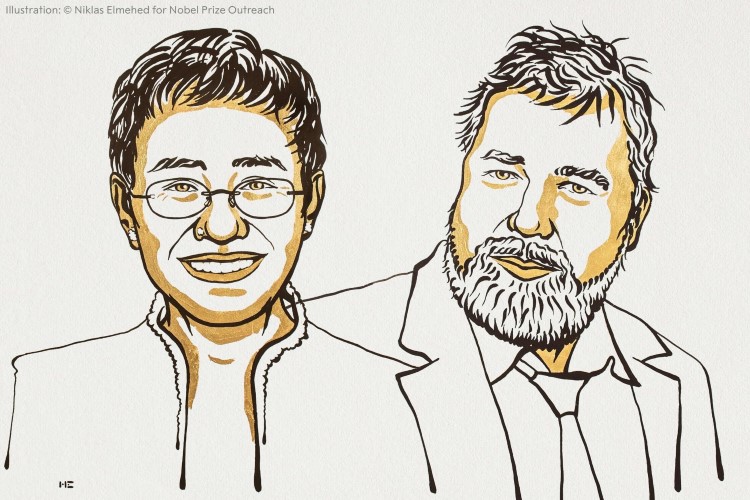 Illustration of this years Nobel Peace Price winners Maria Ressa (from the Philippines) and Dmitry Muratov (from Russia). By Niklas Elmehed for Nobel Prize Outreach. 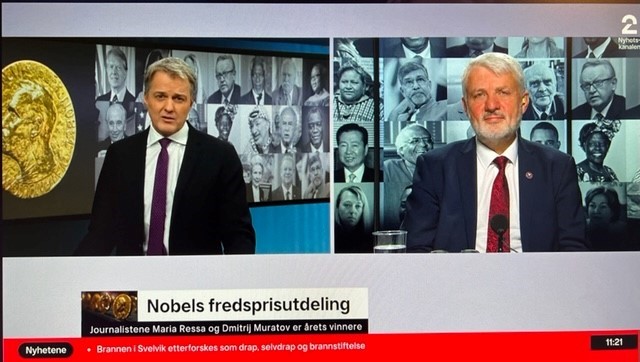 On the 10th of December, the day when the award is handed out, our Secretary General Dagfinn was invited to be a studio guest at TV2 Nyhetskanalen, one of the main TV broadcasting channels in Norway. He talked about both our partner and last years Nobel Peace Prize winner (WFP), and this year's winners.

During the time in studio Høybråten underlines the importance of WPF and our partnership:

"David Beasley has managed to mobilize resources for food from countries all over the world through trustworthy partnerships. Together with WPF and David Beasley we are creating long-term values".

David Beasley was in Oslo to hold the Nobel Peace Prize Lecture for 2020 that was called off last year due to covid restrictions. To read Beasley`s full lecture, click here.