Renewal of commitment in Darfur

After visiting Khartoum in June, the CEOs of NCA, Caritas Internationalis, CAFOD, and ACT Alliance have made a joint decision to renew our joint commitment in Darfur for the next 3 next years.

"Visiting the camps was overwhelming. The number of new internally displaced people has surprised me. This crisis has been going on for ten years now and it is still a humanitarian crisis", says General Secretary of Norwegian Church Aid, Anne-Marie Hellland. She continues: "On the other hand, I was very happy to see the water and sanitation efforts NCA have been building over the years. It was very emotional to see the importance and needs of our work. Safe water is so fundamental and we have definitely contributed to the survival of hundreds of thousands of people". 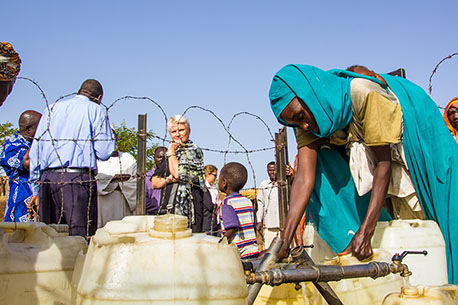 Anne-Marie Helland in Hasahisa refugee camp in Darfur where Norwegian Church Aid has contributed to safe water for the people living there. Photo: Hilina Abebe/NCA

A decade in Darfur

NCA and our collaborating organisations have been operating in a joint Darfur program for 10 years, responding to the humanitarian crisis by providing access to education, livelihoods, health, nutrition, WASH and emergency response in 17 localities across South, East and Central Darfur.

“This is a complex and long term humanitarian situation. One of the challenges is that after 10 years, people are still dependent on us. It is difficult to see how things could have been done differently because it is a continuous crisis”, Anne-Marie Helland says. According to UN/OCHA, 3,5 million people are dependent on some form of humanitarian assistance.

The number of internally displaced people is rising, and the joint organisations are all certain about renewing and continuing the engagement in Darfur. But in the midst of it all, financing fails. Anne-Marie Helland's message is clear:

“The message to donors is to keep Darfur on the funding agenda because there are still massive needs. There are millions of people who need help. We have to care".

Part of the reason for the decline in funding is because there are fewer actors and humanitarian agencies that have access. Agencies like NCA who have access however, need backing and funding because so many depend on help. 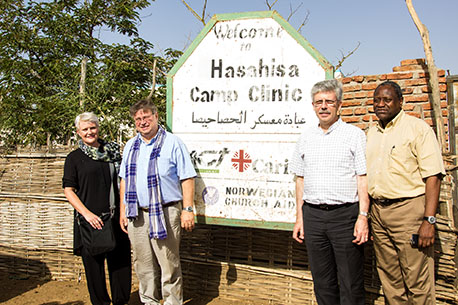 Anne-Marie Helland together with Director of CAFOD Chris Bain, Director of Caritas Internationalis Michael Roy and John Nduna, General Secretary of ACT Alliance, outside the Hasahisa refugee camp. The sign is marked by ten years of presence, yet the needs for continued efforts and funding are great. Photo: Hilina Abebe/NCA

John Nduna, General Secretary of ACT Alliance elaborates: "With more than 130 member organisations, the ACT Alliance is committed to continue to assist the people of Darfur and those that are in need. We have seen that the humanitarian needs are still present and we have to continue to respond. We will continue to raise the resources that we need in order for NCA and partners to continue doing their work in Darfur."

In 2014, NCA plans to reach over 410,000 internally displaced persons and host communities in Darfur.