Last week, NCA & Save the Children held the first physical meeting in Garowe, Somalia since 2018. The meeting brought together teams from Sudan, Ethiopia, Norway and Somalia. 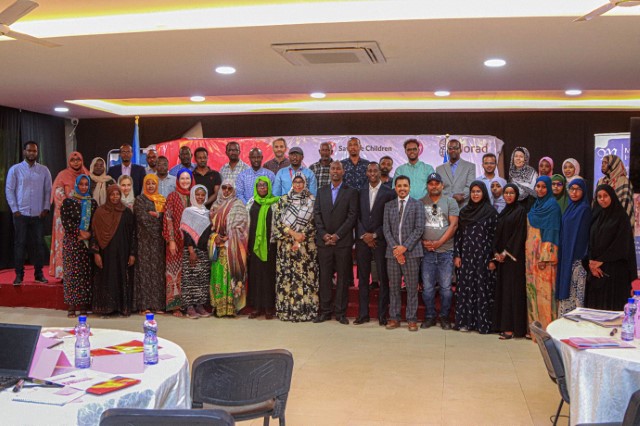 Joint NCA and Save the Children (SC) programme to end FGM & CEFM in Sudan, Ethiopia and Somalia.

The meeting was opened by Dr. Neima, Minister for Women development and Family Affairs and Hon. Mohamed Abdul Wahab Minister for Justice and Religious Affairs.

The meeting was meant as an experience sharing and learning event since the programmes in the 3 countries have mostly similar programme goals and outcomes and use similar methodologies. Colleagues from the 3 country offices and Oslo reflected on achievements made so far, as well as the challenges of addressing these harmful practices in very different, difficult and challenging circumstances. Many were very positive at the end of the meeting, expressing gratitude to the organizers of the meeting for this very timely face to face meeting. As one participant stated, 'It has been great meeting on Teams but the learning and exchanges during these four days cannot be achieved during the monthly 1-hour team meetings!'

During the meeting, we had the pleasure of the presence of the joint UNICEF and UNFPA programme to end FGM in Somalia who made a presentation focusing on their work which similar methodologies as well as challenges like ours; as well as presentations on values clarification on attitudes related to FGM by a representative from the World Health Organization from Geneva (via Teams).  A medical doctor that performs surgery on Fistula patients was also present to share uplifting stories of women and girls who benefitted from the surgery and now living normal lives. In contexts like Somalia, most fistula patients are either hidden by their families or simply live away from the public sphere due to shame and stigma as a result of the condition.

The teams also visited some project sites and community groups discussing ways to end these harmful practices (HPs), and met with government officials to discuss, among others, legislation related to protection of women and girls from HPs.

Somalia is currently experiencing one of the worst droughts in recent times. Many people, including the communities we visited, are struggling to get access to basic commodities and services like food, water and health care. This means that discussing an end to FGM & child marriage is not necessarily top on their list of priorities. Colleagues working in this programme in Somalia have heard of cases where families are marrying off their underage daughters in exchange for dowry to cope with the situation. There are also reports of women who previously worked as circumcizors, but who had abandoned the profession, starting to 'cut' girls again as a coping mechanism to generate income.

Some recommendations from the meeting is that there is urgent need for a 'crisis-modifier' kind of funding to ensure gains made in the work to end FGM & CEFM are not lost. NCA and SC HO teams will have a meeting to discuss a common approach to Norad through our grant mangers to highlight this issue.

The first joint programmes were started in Ethiopia and Somalia in 2006 and 2014 respectively, funded initially by the respective Norwegian embassies in those countries, but later funding was mainstreamed under the Norad and NCA framework agreement in the relevant funding stream. The programme in Sudan received the first funding grant from the Norwegian embassy in Khartoum in 2021, and implementation started this year.

From NCA, these participated in the meeting: