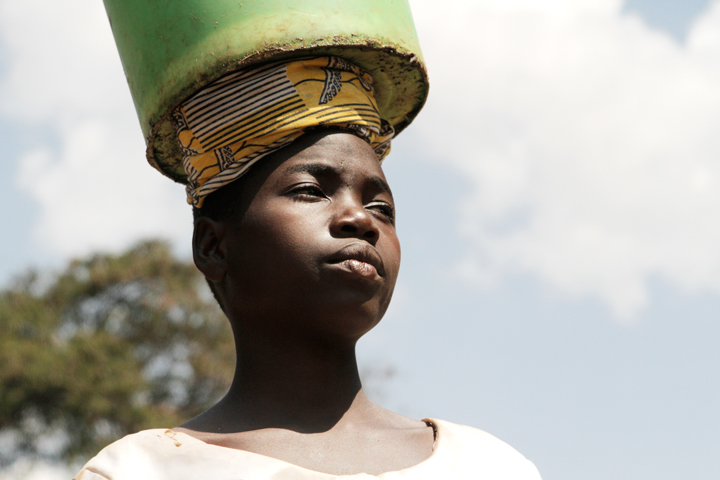 Norad: NCA’s main donor from 2011-2014 was Norad. A substantial part of the funding administered by Norad in this period was channelled via special agreements negotiated between NCA and Norwegian Embassies. Over these four years, the Cooperation Agreement with Norad was stable at about NOK 157 million per year, while specific agreements with Norwegian embassies and other Norwegian restricted government funding have varied between NOK 68-151 million annually. In 2014 NCA’s funding from special agreements was almost equal to the funding from the Cooperation Agreement with Norad. 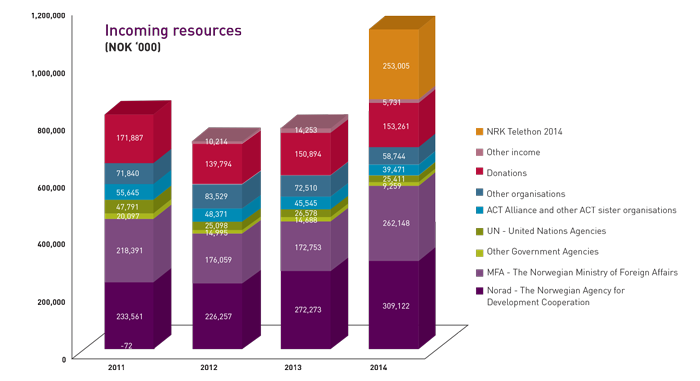 From 2011 to 2012 there was a considerable decrease in the total funding from Norad mainly due to reductions in agreements signed for Eritrea and Somalia. The increase from 2012 to 2013 was largely because the handling of the agreements on Afghanistan, Sudan and South Sudan was moved from the Norwegian Ministry of Foreign Affairs to Norad and became part of the Cooperation Agreement. In 2013, NCA also received specific funding for our global Resources and Finance programme. The increase in 2014 was mainly due to an expansion of the Angola country programme and the new agreement focusing on genderbased violence in Somalia.

Norwegian Ministry of Foreign Affairs: The funding from the Norwegian Ministry of Foreign Affairs (NMFA) consists of humanitarian as well as transitional funding. The humanitarian funding is based on the need for humanitarian assistance worldwide and has varied from year to year, based on occurrences of natural disasters, conflicts and war. Transitional funding has changed with political priorities. NCA’s funding from the NMFA and the Royal Norwegian Embassies peaked in 2014 with NOK 262 million and was at its lowest in 2013 with NOK 173 million. The decrease in 2013 can be explained by a shift in funding for the Afghanistan, Sudan and South Sudan agreements from the NMFA to Norad. The crises in Syria and South Sudan were the main reasons for the increase in the funding from the NMFA in 2014. NCA and the NMFA has a Cooperation Agreement regarding water, sanitation and hygiene (2013-2015). 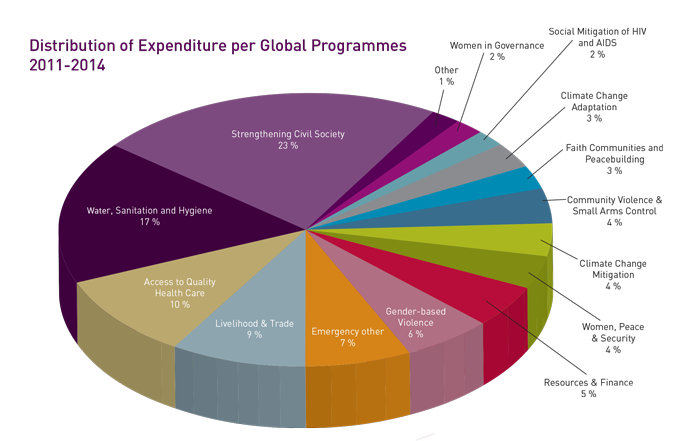 NCA saw the need to increase and diversify its funding base from the start of the strategic period. This was in order to scale up significant aid interventions and reduce the risk of becoming too dependent on Norwegian government funding. Since then, NCA has worked in a structured and systematic manner to obtain funding from global donors. A team of global funding advisors was created in 2011 with the aim of increasing income from global funds. This team provided capacity building to staff in NCA’s country offices, supported proposal writing and cultivated strategic relationships with institutional donors at both head office and in-country levels.

Despite the challenges in fostering relationships with global donors and the changing donor landscape during the past four years, NCA is now more than ever prepared and equipped to diversity its funding base. Global donors such as USAID, UN OCHA, DFID, EuropeAid, UNHCR and the WFP among others are some of NCA’s new global donors. This new funding has allowed NCA to strengthen its systems and structures in order to meet new donor requirements, improve NCA’s ability to plan and implement projects funded by global donors as well as enhance its cooperation with other ACT Alliance sister organisations in order to access large-scale global funds.

More than half a million Norwegians financially support NCA’s work each year through one-time or recurring donations, church offerings or by participating in NCA’s annual Lenten campaign. Donations from Norwegian donors have moderately increased from 2011-2014, reaching a total of NOK 153.2 million in privately raised funds in 2014. In addition, NCA, through a competitive process, was selected as the beneficiary of the Norwegian Broadcasting Corporation (NRK) national telethon in 2014. The campaign “Water Changes Everything” raised a total of NOK 253 million, marking an all time record for funds ever raised through the annual NRK telethon. It demonstrated that NCA is highly regarded among the general Norwegian population. The funds from the NRK telethon are restricted, and more than 1 million beneficiaries will receive sustainable access to clean and safe water, sanitation and hygiene over the next five years.

The total amount of annual donations depends on funds collected for specific emergency response operations. In 2011, NCA raised funds for those affected by the severe drought at the Horn of Africa and by the massive floods in Pakistan. In 2013, NCA raised funds for local communities affected by the Typhoon Haiyan in the Philippines. NCA’s Norwegian constituencies provide strong support to the diaconal work. On top of this, NCA annually raises more than NOK 13 million through long-term partnerships with corporate donors in Norway.