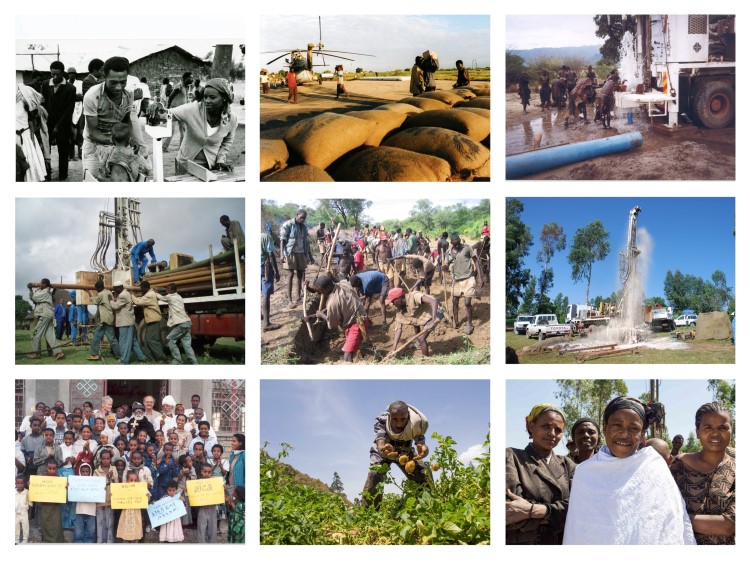 NCA starts operation in Ethiopia upon the invitation of EECMY with emergency relief in Borena and North Omo (Derashe and Konso) in response to the famine.

NCA together with Church based actors establishes Consortium of Christian Relief and Development Association (CCRDA) in Ethiopia.

NCA responds to yet another emergency relief operation in Borena and North Omo (Derashe and Konso).

NCA builds its’ own office in Wollo Sefer, Addis Ababa.

Consolidation of NCA’s programs in line with new realities of government change in Ethiopia.

NCA privatizes mechanical workshop and hands it over to NOR Automotive Ltd.

NCA assists in the facilitation of an inter-religious peace initiative by religious leaders in Ethiopia and Eritrea for peaceful resolution of the Ethio-Eritrean conflict.

NCA responds to emergency in Somali, Oromia and SNNPR through a supplementary feeding program.

NCA enters into strategic partnership with the Royal Norwegian Embassy on good governance.

NCA enters into a first phase of a strategic partnership with the Royal Norwegian Embassy and Save the Children Norway on FGM.

Faith Based Organizations declare against Female Genital Mutilation and Gender Based Violence.

All Africa Council of Churches appoints first special envoy to the AU. NCA hosts it.

NCA supports the establishment of the Inter Religious Council of Ethiopia (IRCE).

NCA responds to emergency in Dollo Ado and provides clean water for refugees from  Somalia.

Ethiopia is selected as one of eight countries to benefit from the  NRK TV Campaign: "Water for a million".

NCA phases out its HIV/AIDS programme.

2016-2018: NCA Ethiopia responds to the El-Nino and La-Nina induced droughts in North Shoa, East-Hararghe, and Fafen Zones of Amhara, Oromia, and Somali regions respectively. A joint Norwegian Consortium, together with local implementing partners, responds in two phases to drought affected and internally displaced people in Oromia and Somali Regions.

2016-2018: The country office enters into a long-term strategic partnership with UNFPA on child marriage, FGM, and gender-based violence.

NCA Ethiopia enters into an agreement with the Norwegian Embassy and the Norwegian International Climate & Forest Initiative to implement the Church Forests project in Amhara and Oromia Regions, together with the Ethiopian Orthodox Tewahedo Church.

NCA Ethiopia launches a new peacebuilding programme after it was discontinued in 2013. The programme launches jointly with ACT Church of Sweden with funding from the Swedish Embassy.

NCA Ethiopia starts new cooperation with the United Nations Entity for Gender Equality and Empowerment of Women (UN Women) to work on ending Violence Against Women and Girls through faith actors in Amhara, Southern Nations, Nationalities, and Peoples State, Gambella and Somali regions.

NCA Ethiopia starts the implementation of the Waste for Value pilot project in Gambella. The project engages refugees and host communities to organize, collect, and sell plastic and metal waste for a recycling company, enabling them to generate income while preserving the environment.

The Government of Ethiopia launches the National Costed Roadmap to End Child Marriage and Female Genital Mutilation/Cutting (FGM/C). NCA Ethiopia, as a steering committee member of the National Alliance, provides financial and technical support during the process of developing the roadmap.

NCA Ethiopia launches a new peacebuilding programme after it was discontinued in 2013. The programme launches jointly with ACT Church of Sweden with funding from the Swedish Embassy.