The School Without Toilet 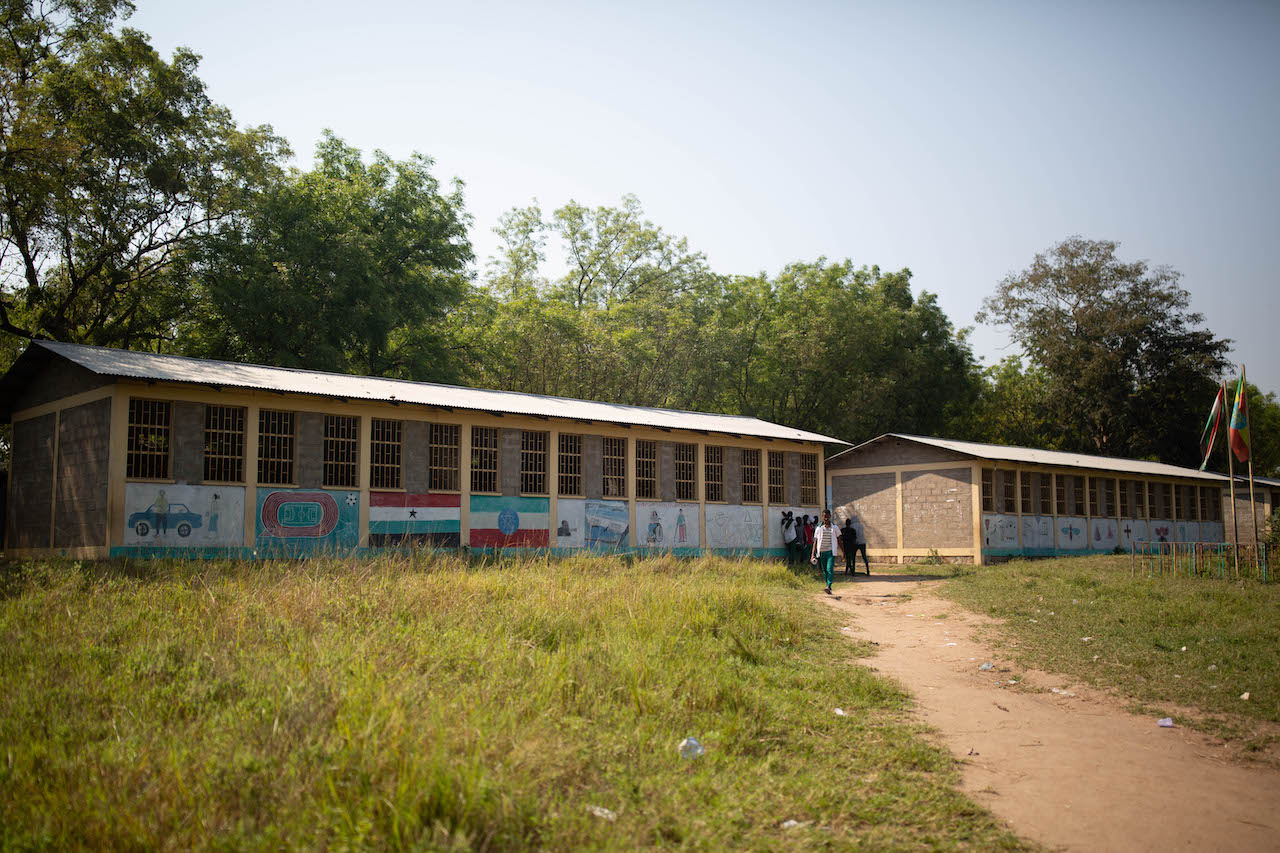 At 8:20 am students rush to get to their classrooms at Elay Primary 1st & 2nd Cycle School in Gambella town, Western Ethiopia. Class has already commenced, and the voices of teachers could be heard from a distance as they begin the days’ session.

Although a typical school day, Elay School is facing its’ biggest hurdle.

A year ago, the school lost parts of its’ land property due to a master plan adjustment. Along with the land that was taken over was the school’s only toilet which was shared between the teachers and the thousands of students.

Since then, the school has no toilet.

Vice Principal of the school, Mastewal Mekonnen joined the school just a month ago, but she is able to understand enough what it means for the 2,536 students (1,300 female) and 64 teachers to function without a toilet. 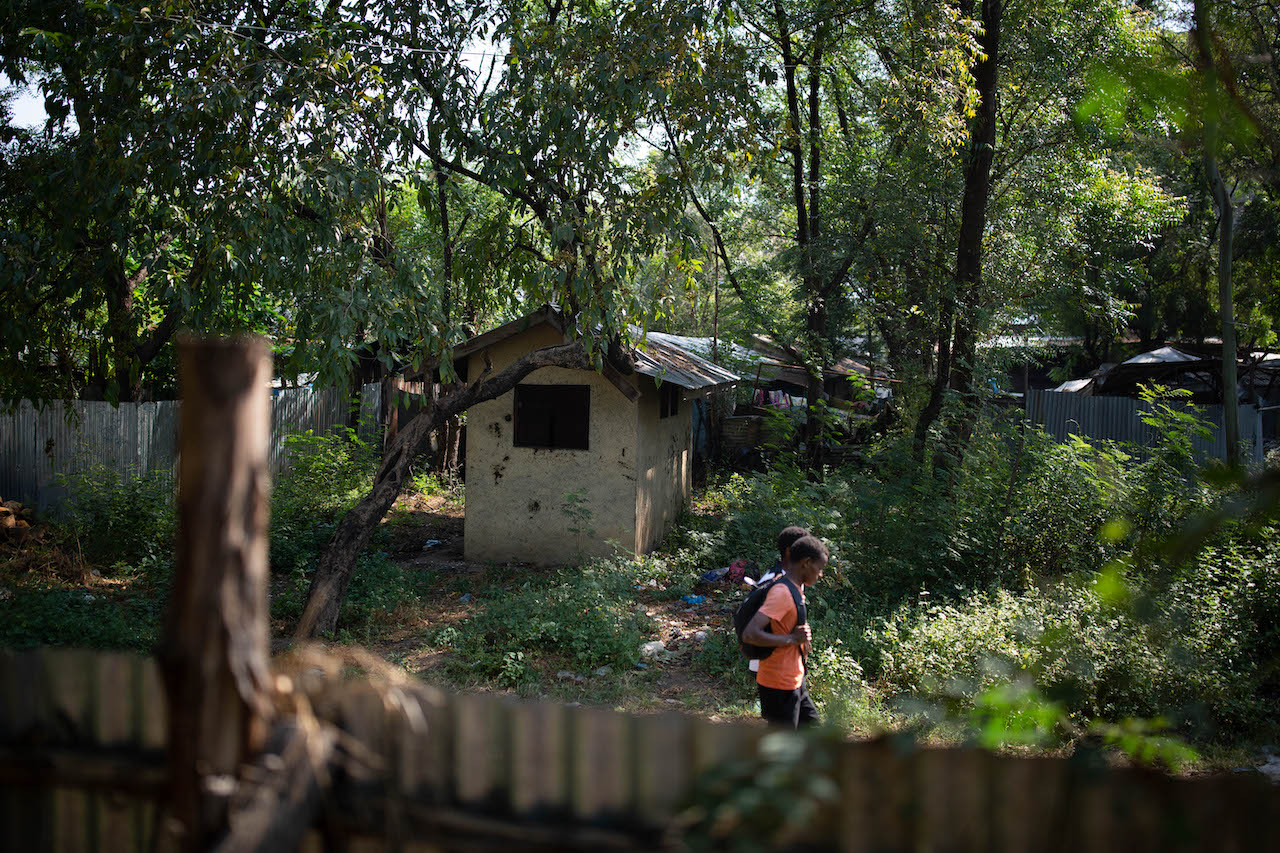 - Since the school lost parts of the property, the only alternative for us is to look for a toilet outside of the school compound, either to the nearby Church or the toilet that now stands along a street. There are children in this school. We have to ensure they return back safe. This not only takes away a significant amount of time tending from the learning hours, but it also puts their wellbeing at risk, says Mastewal.

For the female students at Elay, however, hygiene management is an added challenge they are faced with on a daily basis.

“The current generation of girls should not suffer”

Bekelech Godebo, 40, is a civic teacher at Elay Primary 1st & 2nd Cycle School. As a teacher who taught in the school for 10 years, she was able to see first-hand how a normal menstruation cycle affects girls’ education in the school. For most of them, it is often surrounded with a feeling of shame and stigma.

- When female students are on their menstruation cycle, they come and ask us permission to go home. Sometimes, it is reasons like they have stomach aches. Of course, we know what it means and there is nothing we could do about it, she says.

- Because many students come from a low economic background, their families cannot afford to buy sanitary pads for them. They miss an average of three days of school. 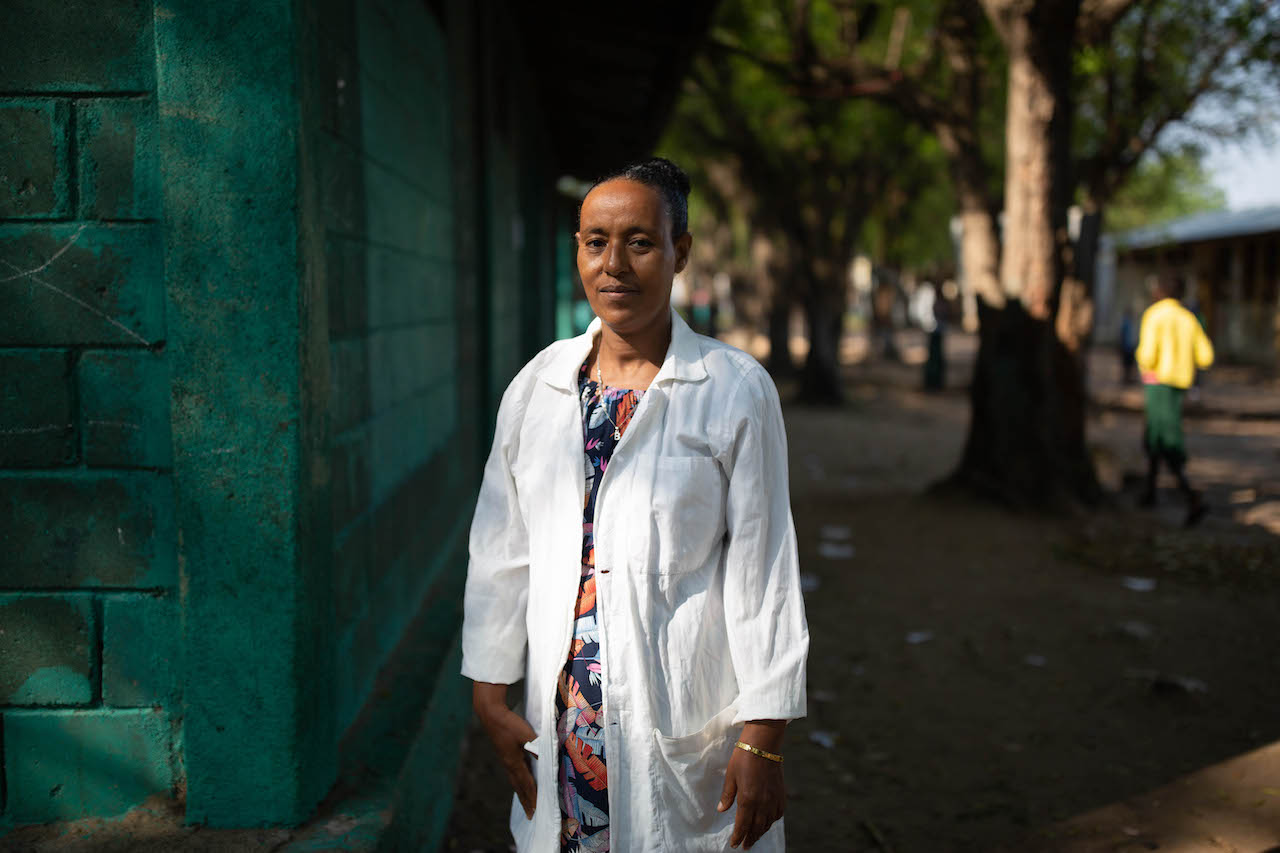 Bekelech tried to help in her own way. She bought sanitary pads from her own pocket and provided it to female students in need whenever she could. Even though it costed her money, for her the sentiment was important. - I believe the current generation of girls should not suffer as their foremothers have due to gender inequality and their position in society. They should not miss school because of menstruation. I wanted to lessen their problem.

And because the school has no toilet, it has become even more difficult for girl students to manage their periods, especially in finding a place where they can change sanitary pads. Bekelech says she offered the one room office space and storage unit she shares with other teachers.

- Because we do not have a toilet, I let the students use my office. If there are other teachers inside, I have to ask them to leave the room so that the student can change a sanitary pad. I tell the students this is not something they should miss class over.

Now, Bekelech is one of the two mentors the school selected and trained in 2017 for NCA’s safe space programme for adolescent girls.

Every Thursday afternoon, for two hours, she and her colleague Romi David mentor 25 girl students between the ages of 12-18.

Bekelech says the mentorship has opened a discussion around issues which would otherwise have remained a taboo. They discuss on sexual reproductive health, HIV/AIDS, and harmful traditional practices such as early marriage that is highly practiced in the region.

- We encourage them to be open to us and their families & guardians.Since the mentorship started, she says the mentees are more open to talk about what they are experiencing.  One of these issues is menstruation. “We tell them not to be shamed about it, but to see it as very natural, God given process. They now come to us whenever they need any support, adds Bekelech. 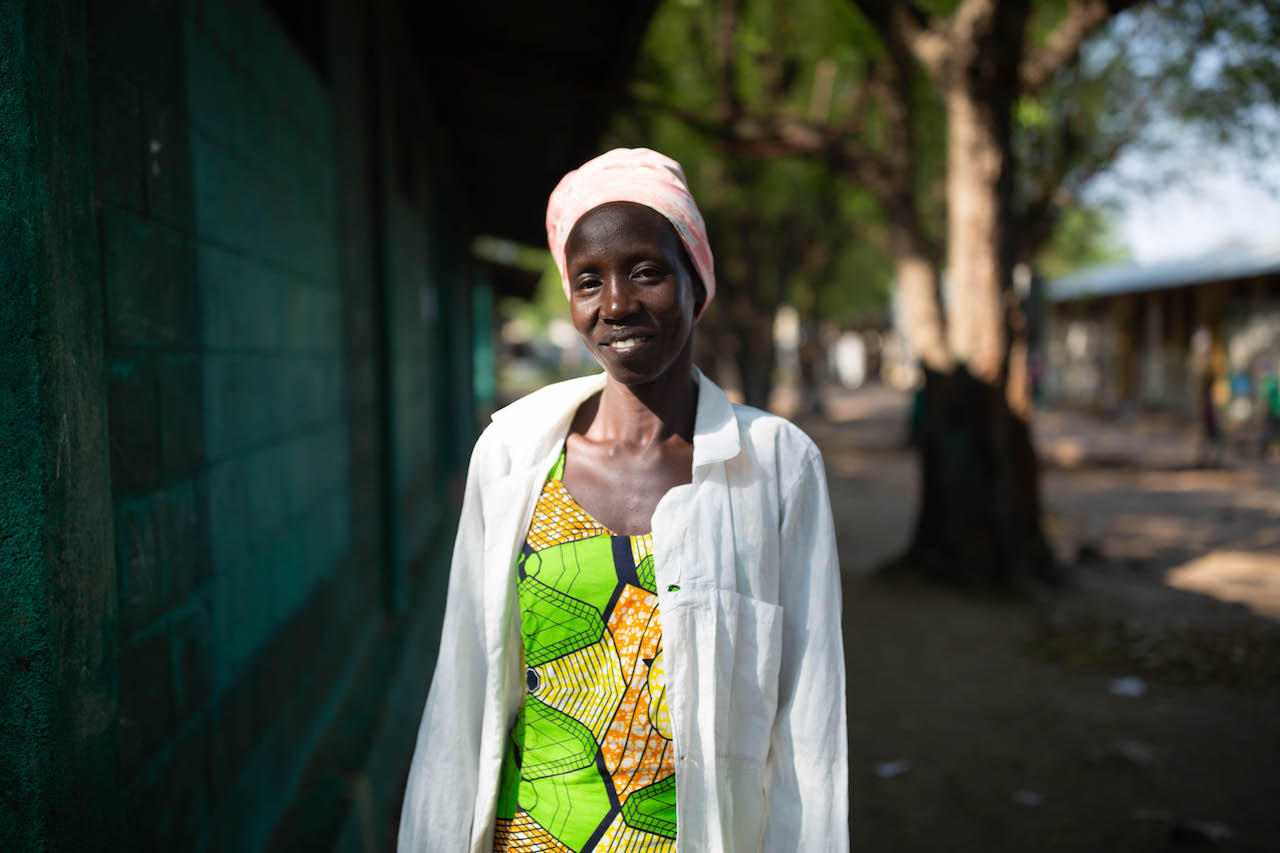 Romi David, 28, environmental science teacher and a mentor says most adolescent girls are often exposed to early marriage because of desperation for a better life. They often undergo pressure from their families and peers. - They are told no one is going to marry them unless they do so when they are young. They are often enticed with material things. We teach them to have an aspiration, a life goal, and a better decision-making ability. We have observed that they are now more confident to discuss and ask questions, she says. 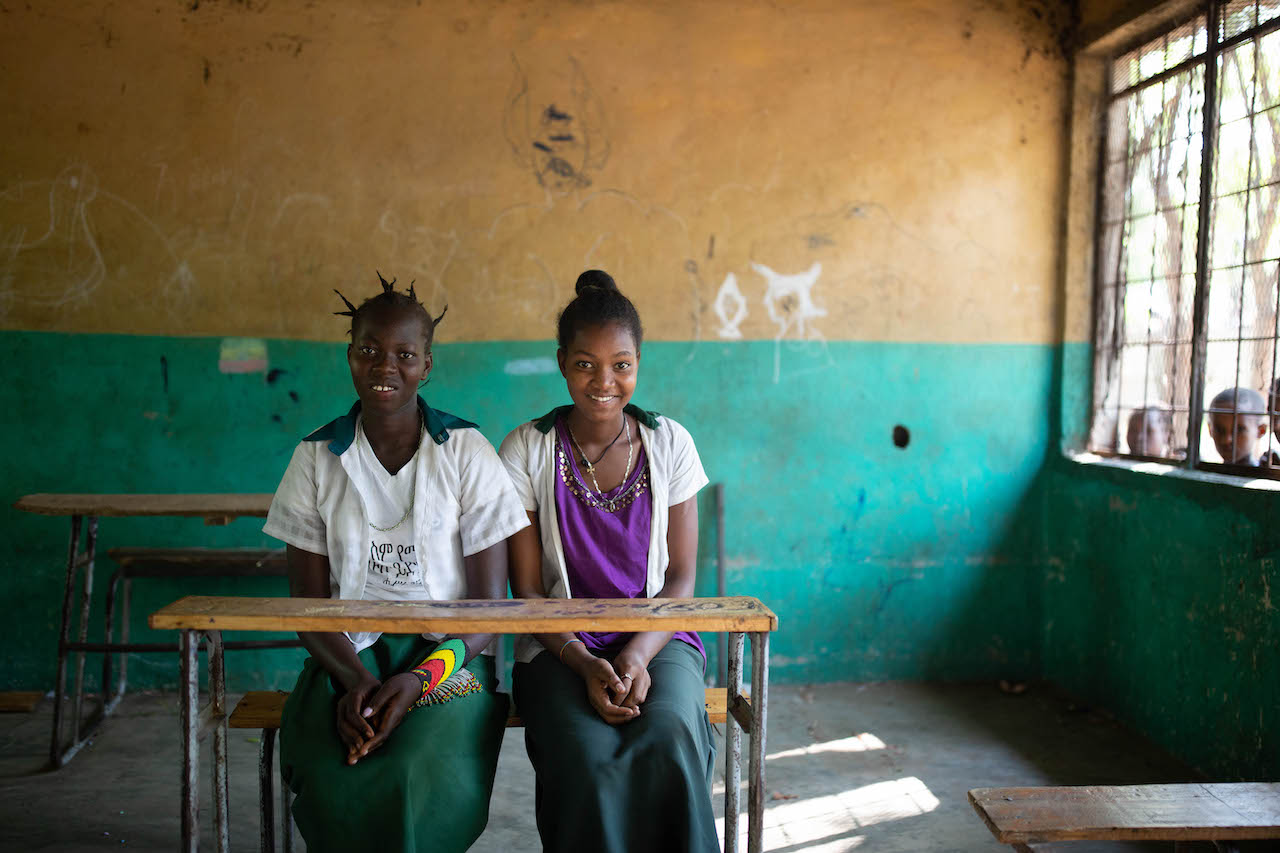 From left: Abang Zerihun and Redeat Kebede, both 16, mentees at Elay Primary School who have completed a mentorship programme in 2017 through UNFPA’s support. Photo: Hilina Abebe.

Redeat Kebede, 16, a grade 7 student and mentee says the mentorship programme, including a sanitary pad distribution has helped her to focus on school. - I used to be ashamed of coming to school when I am on my period. I live with grandmother and we could not afford to buy sanitary pads. Even though I wanted to learn, I could not.  But since I received sanitary pads, I have not missed school, she says.

For Abang Zerihun, 16, a grade 8th student, the mentorship was important to learn about early marriage. - I was able to understand how early marriage affects young girls like ourselves. I now have a good understanding to protect myself from getting married early, she says.

But both Redeat and Abang say the absence of toilet has been challenging. - We would like to have the toilet back in the school, so that we can manage.

In September 2018, NCA Ethiopia and its’ local implementing partner the EECMY DASSC started the “Safe Space: Accelerating action to ensure the wellbeing of adolescent girls in Ethiopia” with the support of the Kavli Foundation.

One of the plans has been to construct a toilet for Elay school, which is currently underway. When finished, it will have sperate toilets for female and male students, with four rooms.

Since the intervention started, NCA’s partner EECMY has also distributed 229 disposable sanitary pads through Kavli’s support, which are made available through the teachers and the reproductive health school club.