During the civil war in Lebanon, she was a refugee in Syria as a little girl. She has spent her entire adult life helping others in the same situation. “It is about giving people hope”, says Ruba Khoury, head of NCA's work in Lebanon. 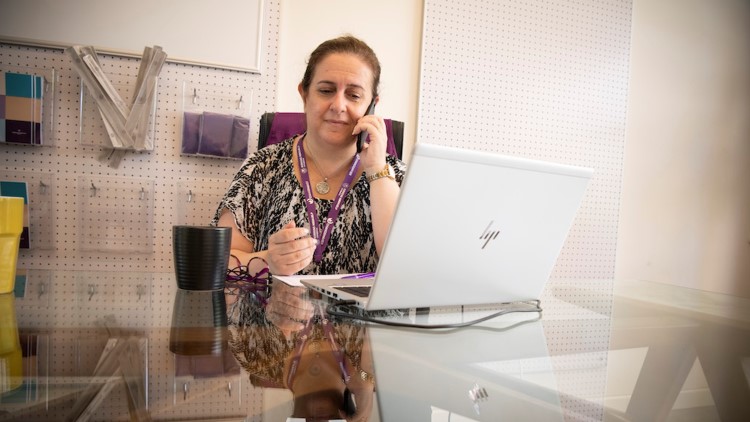 - The explosion in August took us back to the war. To the feeling that the system, our country, is failing to protect us or take care of a population".

Ruba Khoury is sitting in NCA's office in downtown Beirut. On 4 August 2020, the premises were smashed when close to three tonnes of highly explosive ammonium nitrate went into the air in the port area not far away. The blast resulted in death, mutilation, and hundreds of thousands of homeless people. In a city and in a country that long before the explosion was affected by economic and political collapse, sky-high unemployment, rising poverty and the corona epidemic. Had Ruba or anyone else of the staff been to the office this late afternoon, things could have gone terribly wrong.

- One of ours was quite badly injured at home but was taken care of. When I had made contact with all but one, I was scared. Really scared", says Ruba and remembers with horror back to August last year. Luckily, it went well with both colleagues and her closest. But the shock still lingers on.

- The worst is sound, and then immediate memories, of huge amounts of broken glass. I still become shaken and unwell".

A refugee at 4 years old
As an only child, she grew up in Koura, a district in the north of Lebanon. An upbringing marked by civil war, flight, and fear.

- After all these years, the war still has a huge impact on me. We lost both family members and friends. I had to switch schools all the time. There was instability and uncertainty", says Ruba. When she was only four years old, the little family fled across the border into Syria.

- Even though I was little, I remember well that people were very friendly. We were welcomed and received help from so many. I still feel grateful and have good friends in Syria from this time", says Ruba and adds that these experiences probably contributed to her later choices in life.

- As a refugee, I experienced the need for help and protection, but also the importance of being able to maintain the hope of a better future. I think the latter in particular was central when I had to choose a career path. My mother worked in a bank and always sat behind a large desk. It seemed very boring and was the last thing I wanted, says Ruba and laughs. Since then, she has worked in several of the world's largest humanitarian organizations, in recent years as head of NCA's work in Lebanon. In addition, she also coordinates the efforts of a large number of organizations in the crisis that affects the country.

In addition to major internal problems, Lebanon houses one and a half million Syrian refugees and still a few hundred thousand Palestinians with the same status. It is a significant help from a tiny country with almost seven million inhabitants themselves.

- In meetings with people we help, I often explain that I have been a refugee myself. I think this can help to give some hope: When even a poor refugee can end up leading work in large international organizations, then there can be hope for me somewhere up there.

In the last two years, Lebanon's own population have become increasingly aware of crises and distress. NCA has, among other things, rehabilitated broken homes, delivered food, and provided psychosocial support.​ 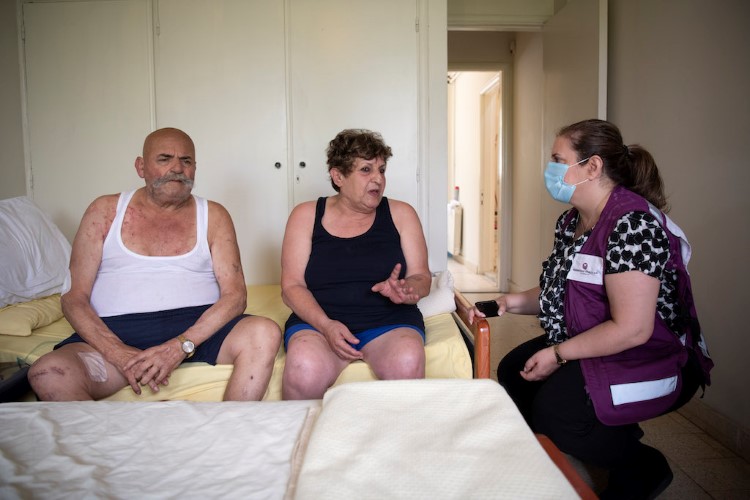 Ruba in conversation with Souad and George Habib, who lost their home and absolutely everything they owned in the catastrophic explosion in Beirut. They got a roof over their heads and everything they needed to make ends meet from NCA. Photo by Håvard Bjelland.

- I think we Lebanese have an inherent will for positivity in us. Even when the burden gets heavy. But sometimes we lose hope. In an otherwise so demanding time, the bomb ruined our dreams. Both my children are now wondering if there is any future left in Beirut, and if they will not, like so many others, move to another country. It hurts, but I understand them, says Ruba and emphasizes at the same time that the need for NCA and other organizations is more important than in a very long time.

- One of the things that makes me most proud to work in NCA is the deep respect we share for the people we help. I got that feeling very quickly when I started in the organization, and I experience the same thing all the time among my skilled and hard-working colleagues: No matter what situation you are in, all people are equally valuable and should be treated accordingly. That is human dignity in practice. And that is one thing that the world can never get enough of.

This article was originally published in the NCA Magazine (01, 2021).