In 2014 NCA received the funds from the NRK Telethon. Together with NRK, NCA broke the record and received the highest amount ever collected in the Telethon's history. The humbling amount of NOK 250 million made it possible for NCA to expand the planned intervention to more countries and more communities. This was made possible with the extraordinary efforts of our colleagues at the implementing country offices.

Please navigate the dashboard above to see what has been done in the countries of implementation. You can also read the full report to NRK, use the link final report for the NRK Telethon Campaign programme 2015-2019 (pdf). 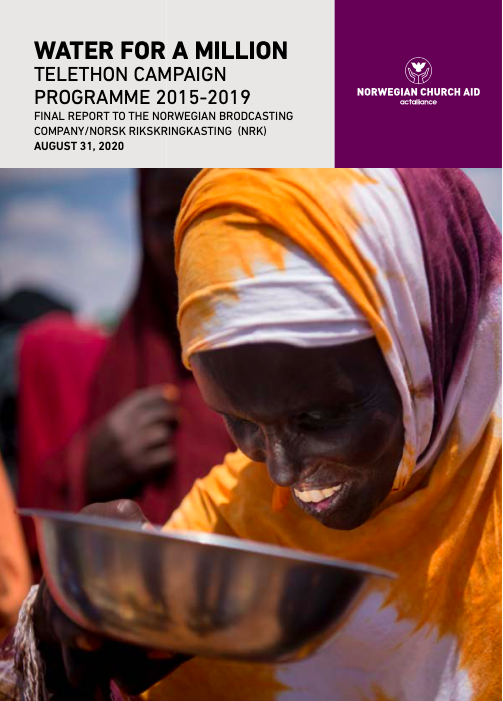 By all accounts the TCP can be said to have been a success, over the five years of the programme ensuring new access to safe drinking water for 1 896 103 people, well beyond our application target of 1 million people. This over-achievement was due to several factors, including a planned mid-programme reprioritisation of funds to performing countries, leveraging results by integrated programming (i.e. communities otherwise not reached by the TCP could be mobilised and engaged with through other NCA programmes), and the application of appropriate technologies, including the increasing viability of solar pumps over the life of the programme.The countries that were included in TCP are Afghanistan, Angola, DRC, Ethiopia, Haiti, Pakistan, Somalia, South Sudan, Sudan and Tanzania.

With TCP funds In Tanzania, NCA released 154 waterpoints and more than 122 000 people has gained access to safe water between 2015-2019. Through the TCP in Tanzania, NCA has constructed new water points at six schools and, over the lifetime of the TCP, has upgraded them to be fitted with solar-powered electric pumps.  This development has allowed the schools to pump more water from the aquifer, to store it in an elevated tank and then distribute it across the school grounds, to the kitchens, dormitories, toilets, showers and taps in the yard of the school – significantly reducing distance and queuing time for students and cooking staff in the schools.

In addition to access to water, NCA facilitated School Water, Sanitation and Hygiene (SWASH) Clubs where student practiced hygiene tips while in schools. The benefit of sharing information with students is that many of them transfer the knowledge to their family and to the community at large.

This is just one out of many country examples. In the report (pdf) you can read all the country-level achievements and impact stories.