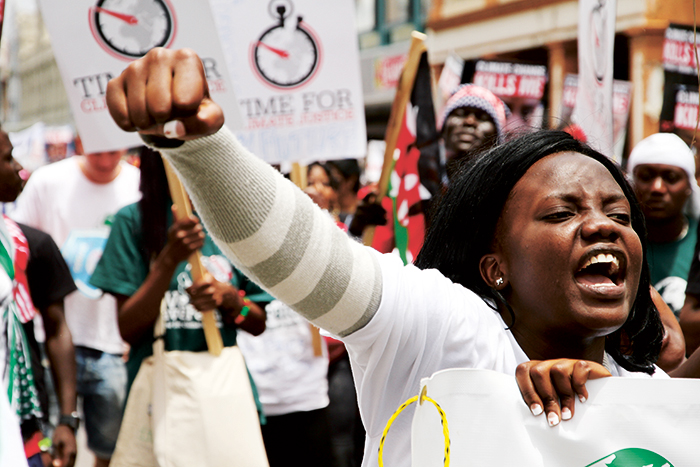 NCA explored a range of options for securing access to renewable energy during this period. Some initiatives have been highly successful, providing energy for almost 209,000 rights-holders, while others have provided valuable lessons for future programming. Implementing this programme has not only contributed to mitigation of greenhouse gases, but the energy provided has also allowed rights-holders to increase their own capabilities through access to household lighting for reading, clean cooking fuels and development of local business initiatives.

The “We Have Faith” campaign leading up to the 2011 UN Climate Change Conference (“COP17”) in Durban, South Africa, achieved results beyond imagination. Through a climate “caravan”, youth were mobilised from 25 countries and 200,000 people signed the demand for climate justice. Many of the signatures were collected in places where signing a piece of paper with a political message would otherwise be unthinkable. As the claim for “climate justice” has not yet been granted, the campaign lives on through the structures that were established by NCA and partners, and the network is currently being re-activated to mobilise for the 2015 COP meeting.

Thanks in part to campaigns such as “We have Faith” and tools such as “Faith Leaders Environmental Advocacy Training” initiated by NCA partner SAFCEI in South Africa, religious leaders have played a much more prominent role in global negotiations. The training has since been extended to other SADC countries such as Zambia, Zimbabwe, Swaziland and Mozambique. Due to their longstanding involvement, NCA partner SAFCEI participated in South Africa’s working committee on energy planning, which gave them the opportunity to influence the development of a national policy on renewable energy.

Civil society has also been strengthened through an increased capacity in and responsibility for energy provision in their own communities, for instance through training on solar panel maintenance, and through improved communication from broader access to mobile phones, radio and television as a result of increased electrification.

Afghanistan: Light for health and empowerment in rural communities

WHY: Less than 30% of rural Afghans have access to electricity, one of the lowest rates in the world. Toxic fumes from kerosene lights cause serious health problems and the lack of electricity bars people from effective participation in society.

WHAT: Training of 64 “Barefoot Solar Engineers” (BSE) (of which 31 women) and installation of solar panels across Faryab, Daikundi, Bamyan and Uruzgan provinces.

RESULTS: As one of the largest NGO-implemented electrification programmes, the solar project has delivered a number of concrete changes in the lives of 50,889 men, women and children over these four years: lower expenditure on health care; improvement in security as (charged) mobile phones are available to use in emergency situations; improvement in the results of children’s’ education as they are able to study at night and more meaningful participation in democratic processes as elections rely on information from radio and television.

A review of the methodology in 2008 noted that the electrification had a particularly positive impact on women’s lives. Their well-being increased significantly as the time saved from house chores could be used for participation in networks and conversation within the household. As women are often restricted from moving between villages, the possibility to access information through radio and television broadens the awareness of rights and opportunities. Access to information also improves men’s awareness about the legal and Islamic rights of women and they are more inclined to accept that women can also take part in decision-making in the community.

The sustainability of the programme is ensured through the BSE approach, initiated in India36 and replicated in Afghanistan, through the training of trainers. The 10 BSEs trained in India have since trained a total of 184 BSEs in Afghanistan, 64 in this reporting period (33 men and 31 women). The BSEs trained have agreed to stay in the communities, and have established workshops to provide services to people. Each household pays 50-70 AFN/ month (approximately 1 USD) for repair and maintenance services including remuneration of the BSEs who earn an average of USD 90 per month. For the women engineers the access to own income is a significant improvement. While some loss is inevitable, monitoring shows that as much as 90% of the systems installed since 2005 are still functioning.

One of the expected outcomes of the programme, access to carbon market funding with the ambition to sell Gold standard certified carbon offsets, was not obtained. Some of the renewable energy initiatives were also not completed according to plan (such as the Kenya biofuel initiative and the Laos pico-hydro plant), or were obtained with different outcomes than expected due to technical challenges (such as the Haiti biogas initiative). While the monitoring framework for governmental initiatives and REDD+ was set up in Tanzania, it has not yet been implemented.

With the extent of energy poverty in NCA’s focus countries, NCA’s expectations regarding green house gas mitigation were, with a few notable exceptions, not realistic. Experience and research have shown that in developing countries, household level energy installations are largely supplementary rather than replacing traditional energy sources. Additionally, firewood and charcoal, which are the energy sources biogas most often replace, is also a renewable, non-fossil energy source. In the interest of concentration and with the abovementioned challenge of mitigation in mind, NCA has decided not to carry forward the CCM programme in the next strategic period. Successful elements of the programme, such as experiences with solar energy and mobilisation of faith leaders and youth will continue through programme activities such as livelihood development and disaster risk reduction.

Other lessons learned include:

Two country programmes (Brazil and South Africa) have worked on this outcome. In Brazil, indigenous peoples have successfully worked for allocation of funds for implementation of land rights policies. Representatives for groups of indigenous people NCA works with have been representing rights-holders at the Kyoto protocol COPs.

Three country programmes (Vietnam, Laos and Kenya) have worked on this outcome. With the exception of conversion to biofuel on diesel generations, rights-holders have addressed their fossil fuel dependency through diversification of energy sources adding for instance solar and biogas, rather than fuel switch. Community mobilisation around the energy sources has been important.

Five countries have worked on this outcome (Tanzania, Mali, Laos, Guatemala and Afghanistan). Over the period, several avenues for securing sustainable energy sources have been explored. Some of these have been highly successful, such as the installation of solar panels using a ‘barefoot’ approach with community members trained in maintenance to secure the access to electricity over time. The majority of interventions have been community-based, with some exceptions such as hydropower in Guatemala and Kenya. Not all interventions were successful, an example of failure include the pico hydropower installations in Laos (not sufficient capacity of implementing partner).

Four countries have worked on this outcome (Kenya, Afghanistan, Tanzania and Laos). Small scale reforestation projects have been implemented over the period. Programmes on energy efficient stoves have been successfully implemented but there is little strong evidence on mitigation of deforestation as a result of this. Land degradation has been reversed through mobilisation of rights-holders for adjusted land-use practices.

OUTCOME 5: Duty-bearers have been influenced to include GDR perspectives and elements in national and international climate change policy discourse

Two country programmes (South Africa and Tanzania) and the head office have worked to achieve this outcome. Through a climate “caravan”, youth were mobilised across 25 countries and more than 200,000 people signed their demand for climate justice, presented at the Durban COP17 in 2011. In a report launched by NCA in 2014 the researchers calculated what Norway’s fair share of the global climate effort should be. This report sparked massive debate, got more than 60 media stories and dominated the first day of ‘Arendalsuka’. More than half a year later NCA has observed that several of the environmental NGOs as well as some of the political parties have picked up the rationale which was presented in our report, referring to the principles of historic responsibility and economic capacity and used as a basis for their policies.

OUTCOME 6: National decision-makers have been influenced in the development of national policies on renewable energy and deforestation

Four country programmes worked on this outcome (Kenya, Vietnam, Tanzania and South Africa). While some results are seen, such as the influence of a biofuel review report in Kenya had with direct inputs to national biofuel standards, the majority of achievements are not directly related to the outcome, as a bottom-up approach has led to contextual aims for influencing duty-bearers on environmental sustainability.

Two country programmes worked towards this outcome (Kenya and Vietnam). The outcome was not achieved within the project period. As it proved too resource intensive to access carbon market funding for small scale projects (costs exceeding benefits), it was abandoned.