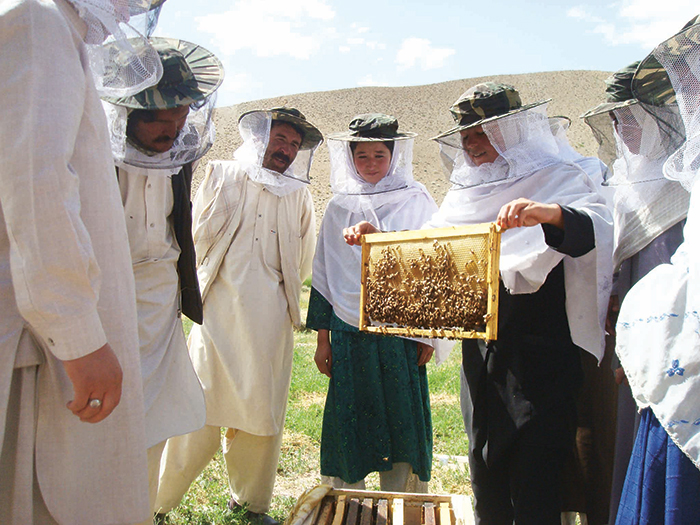 From 2011-2014, NCA and partners organised almost 517,000 rights-holders in groups to actively improve own livelihood. The rights-holders’ economic vulnerability has been significantly reduced. This was achieved through NCA’s approach of working through groups enhancing and adding value to their agricultural products, developing entrepreneurial and business skills, facilitating access to capital and enabling women and youth’s access to vocational education.

Mobilising and organising women in groups for improved livelihoods

One of the main strategies for strengthening civil society in the Livelihood and Trade (L&T) programme is to mobilise and organise people for improving their own livelihoods. Means like cooperatives and savings and loans groups are used for sharing information, collective bargaining and as learning platforms about rights. Mobilising and organising rights-holders in groups also contributes to building active citizenship. In fragile states like Palestine and Afghanistan, the work has had particularly strong impact on strengthening women’s role and participation in society.

In 2011, women from the Daikundi province in Afghanistan claimed they had no own income and were not allowed to talk in meetings nor participate in decisionmaking in their own communities. Becoming members of self-help groups and cooperatives enabled women to participate in small business activities such as dairy processing, beekeeping, carpet weaving and poultry farming. With access to own income and increased confidence, women started engaging in the local shura councils. This gained women more respect in the community, and the men now see women contributing to solving economic challenges. Women are now recognised as being part of society and are allowed to work outside the home. Women are empowered to participate and accepted as members of the shuras, and as participants at public gatherings and ceremonies. These women now act as community activists and take active roles in decision-making inside their communities, something they were previously barred from.

WHY: Lack of access to capital, markets and relevant knowledge and skills to diversify businesses and income sources have been key challenges to improved and sustainable livelihoods for many rights-holders.

WHAT: Mobilisation of rights-holders to form groups to collectively improve members’ livelihoods. Key methods to achieve this include formation of savings and loans groups (such as the VICOBA model), self-help groups and farmer cooperatives and associations.

NCA recognises working through groups as an effective way of mobilising and empowering communities to address economic vulnerability. In Afghanistan, Myanmar, Palestine, Somalia, Sudan, Tanzania, Zambia, Mozambique, South Africa and Brazil, different forms of organisation combined with knowledge and skills training paved the way for rural communities to improve their livelihoods and reduce their economic vulnerability. In Zambia, food security for over 19,000 women and men improved through farmers’ groups, savings and loans groups and water committees. NCA and partners also worked through groups in fragile states and conflict settings, for instance in Afghanistan, where 14,550 women and men strengthened their food security through self-help groups and farmer cooperatives. An example from Tanzania illustrates the importance of working through groups. In this context, Muslim, Protestant and Catholic NCA partners have joined forces to organise people in interreligious savings and loan groups (IR-VICOBAs). The inter’religious nature of the approach has been key to its success, as it has enabled rights-holders of various faith communities to work together, which is in itself important in a country where tension along religious lines remains33.

33 An evaluation from 2013 of Tanzania’s Livelihood and Trade programme confirms this, linking the achievements of the IR-VICOBA model with its faith-based entry point.

In 2011, rural and peri-urban women in particular, lacked access to capital, markets and relevant

knowledge to diversify their businesses and income sources. IR-VICOBA has been the key method to address these challenges.

The number of IR-VICOBA members more than doubled (from 47,358 to 94,720) during the period. The volume of savings mobilised through these groups during the period (USD 10.2 million) illustrates the magnitude of the intervention. The collective savings have enabled investments in members’ businesses through loans, which have resulted in significant income elevation at household level. Some of the best performing groups increased members’ monthly household income level twentyfold from 2011 (TSH 150,000) to 2014 (TSH 3 million). The increased income has led to an upgrade in members’ housing standards, enabled children to go to school and improved access to health services as members are now able to pay for construction materials, school fees and medical expenses.

Pooling of capital combined with training on entrepreneurship, value addition and business skills in VICOBA groups has proven a powerful method. Rights-holders have been stimulated and economically empowered to invest in and develop micro and small enterprises. Between 2011 an 2014, VICOBA members established numerous enterprises in sectors ranging from agriculture to tailoring to retail shops. Some VICOBA group members were able to train and employ on average four to six other people in the business they started. Market opportunities increased by establishing VICOBA networks, enabling trade among rights-holders.

More than 75% of IR-VICOBA members are women, who have become economically empowered through the IR-VICOBA system. Beyond reduced economic vulnerability through entrepreneurial activities, women’s economic independence has led to greater influence at household and community level. In Lushoto, when women’s economic activities made them the breadwinners of their families, they reported having greater influence on household and family decisions. At community level, women assume more responsibility and are more confident to engage in governance processes. This is illustrated by the cases from Shia and Rufiji villages where female IR-VICOBA members were elected to local government leadership positions. The work with IR-VICOBA is highly regarded by the Tanzanian government, who uses lessons learned from IR-VICOBA as input to statistics and own poverty eradication initiatives.

Global and regional advocacy related to Livelihood and Trade received less attention than planned in the current period. Advocacy efforts were instead directly targeted at local and domestic processes. Limited advocacy results on a global level can be explained by lack of staff and partner capacity to follow and influence international processes.

Like the Resources and Finance programme, the Livelihood and Trade programme has proved to be a successful platform for sharing programme experiences and methodology between NCA staff across country contexts. This inspired new projects and results achieved on e.g. market access and has contributed to developing a global programme.

OUTCOME 1: Rights-holders are organised to secure sustainable livelihoods in rural and urban environments

Achieved in Afghanistan, Brazil, Kenya, Laos, Myanmar, Palestine, Somalia, South Africa, Sudan, Tanzania and Zambia, where rights-holders improved their livelihoods and income from organisation in savings and loan groups, farmers’ cooperatives and associations. This outcome has been a core focus of the global programme for all the countries.

Partly achieved. This has not been a key focus for most country programmes over the past four years, but the Zambia programme achieved some important results on e.g. raising national minimum wages of workers.

Achieved in Afghanistan, Brazil, Kenya, Laos, Palestine, Somalia, and Tanzania, where establishment of small scale enterprises increased the income of women and youth. This outcome has been one of the key areas of the global programme.

Partly achieved in Southern Africa with the recognition of informal sector and free movement of people in SADC region. Limited achievements in Somalia due to weak government structures and lack of space to influence legislative agenda.

Not achieved in Southern Africa. Despite significant efforts by NCA and partners to build knowledge of the SADC governments on challenges related to Economic Partnerships Agreements (EPAs), governments yielded to EU pressure and signed the agreements. In Norway, the trade campaign “Nyt Afrika” (Enjoy Africa) made fair trade one of the biggest issues of the development debate in 2012. The campaign featured about one hundred times in the media and many political parties adopted NCA positions in their party platforms.

With the exception of Brazil and the Brazilian-Norwegian advocacy efforts targeting Norwegian soya company Denofa, this has not been a focus of the past four years.

Achieved in Afghanistan, Brazil, Kenya, Laos, Myanmar, Somalia, Tanzania and Zambia. Reduction in various markets barriers – including physical, cultural, bureaucratic/political – enabled rights-holders to sell their produce in domestic markets. Limited achievements related to access to international markets. This outcome has been one of the key areas of the global programme.