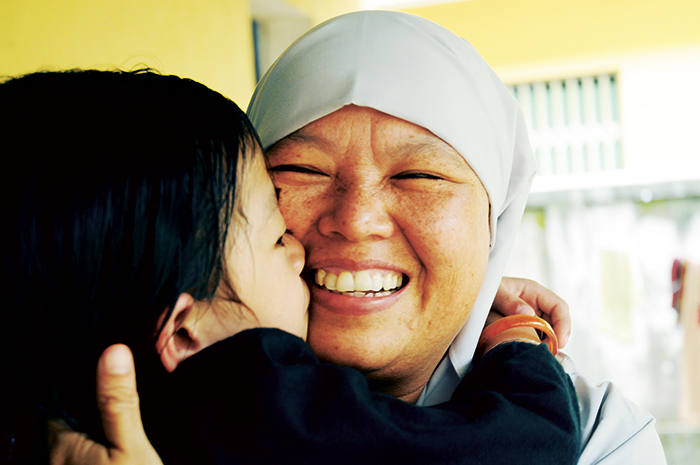 Social Mitigation of HIV and Aids

Overall goal: Improved quality of life for people living with or affected by HIV and AIDS

Between 2011 and 2014, NCA provided medical assistance and social and economic support for almost 50,000 people living with or affected by HIV and AIDS in seven countries. For many of these rights-holders, the quality of life has improved.

Buddhist Monks in Vietnam enabled to carry out social work

By focusing on faith-based partners in the implementation of projects, their competence on HIV and AIDS related issues has increased. Faith actors have used their outreach potential to play a major role in delivering services to people infected and affected by HIV. Some of the most outstanding results are found in Southeast Asia, where NCA has mobilised faith-based actors to deliver care and support to those directly affected by the epidemic, and also to provide other health and social services. This case focuses on NCA’s work with religious actors in Vietnam and how this support has enabled some of them to carry out on social work.

NCA Vietnam has gradually been building partnerships and working to increase the participation of religious actors in fighting stigmatisation and discrimination related to HIV and AIDS in local communities. Stigmatisation is a barrier to effective HIV prevention and treatment programmes and causes poor adherence to prevention and treatment services. NCA has focused on developing the organisational capacity of FBOs through facilitating their legal registration and creating an enabling and supportive environment for them in civil society. The quality and results of the work done on HIV and AIDS by NCA and partners has led to a new recognition and space for FBOs to engage in social work, after being restricted from this since 1975. Through the support of NCA, the faculty of social work of the Buddhist University (BU) in Ho Chi Minh City was re-established in 2012 and NCA has since assisted the BU in teacher training and the development of curricula. The training courses for Buddhist monks and nuns are expected to make a difference in their perception, skills, working methods and approaches towards development and social work, establishing a broader platform than the traditional model of charity work. This will be the foundation for mainstreaming social work in the Buddhist educational system. In the 3rd quarter of 2015, the first 37 students will graduate and become social workers and social mobilisers of Buddhist pagodas and institutions across Vietnam, providing health care services including psychosocial care. In addition to developing the capacity of FBO partners, NCA has initiated demonstration models on promoting comprehensive care for People Living With HIV (PLWH). The contribution and involvement of FBO partners and rights-holders have created sustainable and accountable models for target groups. Some successful models are: the establishment of a referral system; the revolving loan scheme for PLWH; and models on life skills education for children. These models are now owned, maintained and still being replicated by FBOs, local NGOs and communities.

Another groundbreaking result was the establishment and registration of three organisations as CSOs (two of these faith-based/Buddhist) during the reporting period, with the help of NCA’s legal and diplomatic support. These CSOs are now able to implement projects on treatment and care for PLWH. Hai Duc and Phap Bao centres are the first FBOs in Vietnam to be registered as CSOs, and are eligible to receive direct international funding for their work and to develop their organisations. A third achievement was the change of national and religious laws, policies and regulations that previously discriminated against PLWH, a change which can be attributed to joint advocacy efforts by NCA and 54 FBOs and other CSOs.

WHY: In Thailand, a massive government programme effectively reduced the number of new HIV infections from 143,000 in 1991 to 9,700 in 201148. Nonetheless, in 2011 there were still 490,000 people living with HIV, and 23,000 people died from AIDS-related illnesses. Factors such as an increase in high-risk sexual behaviour among young people led to concerns that the country could face a resurgence of HIV and AIDS in coming years, unless past efforts are sustained.

WHAT: 60 FBO centres have been established providing HIV and AIDS prevention, care and support. These FBOs have a wide network of volunteers trained and rooted in all communities and have now extended their capacity to work on other issues beyond HIV and AIDS. Manuals for trainers have been developed to an advanced level.

RESULTS: NCA Thailand has successfully utilised NCA’s model of working with FBOs to promote lasting social change and to develop the local and national capacity to address some of the numerous social and health impacts of HIV and AIDS. In doing so, significant contributions have been made to some of Thailand’s successes in increasing awareness, reducing HIV prevalence and strengthening and widening the reach of care and support networks to serve People Living With HIV and AIDS (PLWHA). NCA is confident that the gains made can be sustained by the interfaith network after NCA’s close-down of its Thailand programme in 2015.

In Thailand, NCA has been implementing an HIV and AIDS care and support project in collaboration with FBOs with the financial support from the Global Fund to Fight AIDS, Tuberculosis and Malaria since 2005. The project has achieved some significant results in this primarily Buddhist country. NCA has accompanied faith leaders from Christian, Muslim and Buddhist FBOs to form a joint organisation and to develop manuals on how to work with HIV and AIDS in the communities. Today the manuals are used by FBOs to address a wide range of social issues including, but not limited to only HIV and AIDS.

The interfaith foundation was recently renamed the “Thai interfaith Foundation for Social Development (INHAT/TIFSO)”. NCA has provided technical support to the development of INHAT/TIFSO’s management, leadership and governance structure and has facilitated linkages between the foundation and relevant networks at regional, national and international levels. Furthermore, in order to promote sustainability of the civil society structures that were established, NCA has supported INHAT/TIFSO to align and mainstream its work in HIV and AIDS with other stakeholders like local administrative organisations, hospitals and other NGOs supporting HIV and AIDS and health care programming.

With the support from NCA, INHAT/TIFSO has established 60 FBO centres at community level. The centres, which are established in connection with Buddhist temples, Christian churches and Muslim mosques, have been able to develop their own HIV and AIDS care and prevention proposals and receive financial support from the Local Administrative Organisations.

The establishment of 11 peer groups linked to the FBO centres contributes to fostering participation on HIV and AIDS care and prevention in the 22 target provinces. Associated peer groups have expanded their reach to work with wider populations such as youth, migrants and prisoners. In 2014, 3,190 PLWHA took part in a self-esteem building process. Through the 2012-2014 “CHILDLIFE” project INHAT/TIFSO empowered 394 Child Action Groups’ board members in 40 sub-districts in Nakorn Sawan province. Groups of volunteers are now organised and several villages are able to organise their HIV and AIDS work for children without external funding. Volunteers and stakeholders hold regular meetings to address how they can help PLWHA and persons affected by HIV and AIDS address issues related to housing, school fees and counselling.

Life stories collected from this project describe a journey from a point for many PLWHA where discrimination and exclusion were a part of daily life, through to a situation where PLWHA now reside in their own communities as respected members. This is attributed to the focus on building self-esteem community groups, which this project has promoted. Through livelihood projects organised in the communities, PLWHA have also been able to earn an income and continue their lives as contributing members to their families.

NCA’s global Social Mitigation of HIV and AIDS programme has a major focus on service delivery, in the form of care, support and life skills training to vulnerable people. This focus has been an important contribution to promoting human dignity and justice. Faith-based actors have played important roles in this work, and have contributed to reducing stigmatisation and discrimination.

Contrary to the objectives outlined in NCA’s Global Strategy (2011-2015), very few of the country programmes working on HIV and AIDS have developed strong components on mobilisation of rights-holders to claim their rights and advocacy towards duty-bearers to fulfil these rights. There are some exceptions, such as the Vietnam programme, but most programmes have first and foremost been basic service delivery programmes with an additional focus on awareness-raising and activities aimed at reducing stigmatisation and discrimination. In some contexts, such as Angola, this situation was due to the fact that there still is pervasive stigmatisation of PLWHA, which made it difficult to mobilise PLWA to demand their rights from duty-bearers. Limited funding possibilities for HIV and AIDS projects have also been a challenge for programme development in countries like Angola and Ethiopia. A third reason for this lack of focus on rights-based strategies such as mobilisation and advocacy within the HIV and AIDS work is that many of the countries in which NCA works are characterised by a low level of knowledge and awareness among the population on HIV and AIDS. There is also often a lack of adequate social services offered by the government for PLWHA. Therefore, NCA’s partners have seen the need for them to continue providing basic service delivery accompanied with information and education activities. Because of these limitations, the results under the global HIV and AIDS programme are rather limited.

NCA will not carry forward a separate HIV and AIDS programme in the next strategy.

Achieved in Vietnam and Malawi. The HIV and AIDS epidemic is feminised and by addressing gender inequalities in Malawi a change in increased male participation in community-based care for PLWHA is seen. 40% of caregivers are now men compared to 5% before the project started.

Achieved in Vietnam and Malawi, not fully achieved in Angola. In Angola partner interventions lacked a rightsbased approach, which could challenge power relations or injustice faced by the PLWHA. Partners had limited results in addressing the exclusion of PLWHA within their own religious communities nor in the wider society.

OUTCOME 3: Local and national duty-bearers are influenced to provide treatment and care for PLWH

Achieved in Ethiopia, Thailand and Vietnam. In Malawi NCA has supported an Access to Drugs campaign. This resulted in empowerment of communities to hold duty-bearers accountable over promises made in relation to availability of drugs and medicine at health facility level.

Achieved in all countries. The access to PTCM services has increased in all countries and education and livelihood projects have increased access to school for OVC and secured income for families affected and infected by HIV. In Thailand, NCA and partners developed different models where PLWHA are producing different products like fish and mushroom. This has secured their income and their children can continue their schooling.

Achieved in Laos, Ethiopia and Malawi. In Malawi, NCA supported sessions with couples on sex and sexuality. Couples were sensitised on stereotypical gender norms, roles and relations that predispose them to HIV infection. The sessions resulted in improved mutual faithfulness among couples.