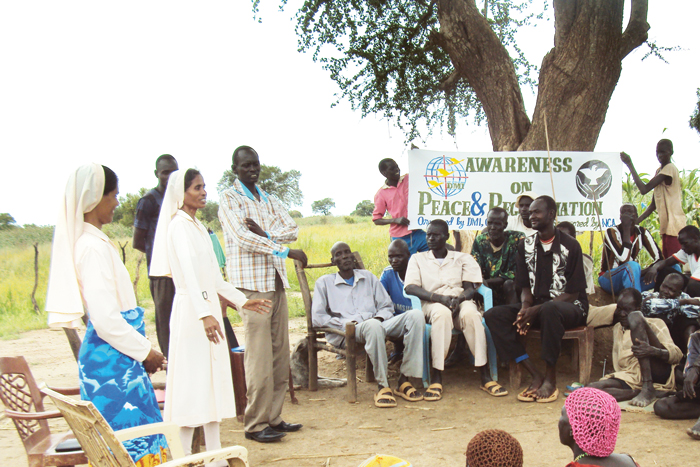 NCA has established and strengthened local peace committees, which have played a crucial role in intervening in more than 1,500 local conflicts, contributing to improved relations between ethnic groups, prevention of continued violence and enabling rights-holders to resume productive activities related to natural resources. NCA has also contributed to prevent youth at-risk from being (re)recruited into armed groups.

Building bridges between citizens and authorities in conflict settings: Civil society as a connector In the context of violent conflict, citizens’ trust in authorities and public institutions can easily erode, as they experience that the state is not fulfilling its obligations to protect them and provide basic services. Sometimes the authorities’ lack of responsiveness to ordinary people’s need, or their favouring of one group over another, is also an underlying cause of violent conflict. Contributing to strengthening both citizens’ and local governments’ capacity, and building bridges between them are therefore key to preventing and transforming conflict. This has been an important element in NCA’s work in several contexts, such as Haiti, Afghanistan, Burundi and South Sudan. In South Sudan, NCA’s contribution to building local governance in the form of local Boma councils stands out as a success. There are key challenges linked to both the lack of governance at local level and the gap between the new government and the traditional governance structures at community level in South Sudan. Division of roles between the two structures has not been clear and has been a source of conflict in many areas throughout the country. Through the establishment of councils at the local and county level, NCA and partners have been able to form and strengthen local governance at the grassroots level. This was achieved through working in an inclusive manner and in alignment with the intention of the Local Government Act of 2009, merging formal and traditional governance structures. These Boma councils are comprised of leaders from different villages who come together to discuss and regulate the use of land, water resources and grazing areas for cattle, which are the main conflict drivers in South Sudan. Through these councils, the local communities now contribute to planning their own development activities and demand their rights from the government for the continual delivery of social services. Until now, 18 Boma councils have been established and trained, and the process has gained ground with both county and state authorities expressing interest in expanding this training to other counties outside the target areas.

WHY: Conflicts at the local level not only represent a security threat for the local population, but they can also affect agricultural production, access to water sources and the opportunity to participate in community processes.

WHAT: Training of and support to local peace committees which intervene in local conflicts.

RESULTS: Local peace committees mediated in more than 1,500 local conflicts related to land, political issues, access to water sources, domestic problems and other questions in selected areas in Mali, South Sudan, Afghanistan and Burundi, contributing to improved relations between ethnic groups, prevention of continued conflict-related violence and enabling rights-holders to resume productive activities linked to the use of natural resources.

In several of the countries where NCA works, local conflicts severely affect people’s quality of life. The local justice system is often weak, corrupt or non-existent, and this increases the risk of conflicts escalating into violence. In Mali, South Sudan, Afghanistan and Burundi, NCA has therefore contributed to establishing and strengthening local peace committees made up of locally respected women and men representing the community. These committees are trained in conflict negotiation skills and have the capacity to quickly intervene when disputes arise. Often they also contribute to conflict prevention through organising cultural events and facilitating dialogue between local leaders and community members. NCA’s work in Mali is a good example of how such peace committees have had considerable impact on people’s lives.

In the areas where NCA works in Mali, approximately 80% of conflicts are related to access and control of natural resources, like water and land for pasture. These conflicts are frequent and reoccurring, with 20% of them lasting for as long as 20 to 30 years. They can start as conflicts between individuals, but when there is no solution, they often escalate and involve families, friends or entire communities. Such conflicts frequently deteriorate into violent clashes resulting in destruction of economic resources, reduced agricultural production and even deaths. Some cases have ended in more than 100 casualties. If taken to court, the legal process can be time consuming and expensive for the parties involved, often ending without a final ruling to resolve the underlying conflict. To respond to this, NCA and partners have developed an approach that builds on traditional Malian culture and key findings in the field of conflict transformation. The approach is centred around gender balanced peace committees who are trained to intervene in conflicts applying mediation and negotiation tools. An important element of the work of the committees is also to facilitate inter-community agreements which regulate the management of shared resources and sets up a system to monitor the adherence to these regulations.

This approach has been highly successful: 48 peace committees have over the last four years resolved 188 of 245 identified conflicts, none of which have later resurfaced. 17 inter-community agreements have been signed, involving over 3,000 people in dialogue leading up to agreements. Together, this has enabled people to re-initiate productive activities that were halted or impaired due to conflict. The peace committees are active in 54% of the municipalities in Gao, Kidal and Timbuktu regions, and are viewed by citizens as highly legitimate since the committees are elected by the communities themselves. The peace committees coordinate with local authorities, and the judicial system has welcomed their interventions. A remarkable achievement is that these local committees continued their work despite the Tuareg rebellion and the subsequent military intervention in northern Mali in 2012-2013. Although the peace committees were not able to influence the overall conflict dynamics in northern Mali, they contributed to reduce the conflict’s impact on ordinary people’s lives by continuing to fill its role as conflict mediator in new and existing conflicts.

The programme originally included a focus on small arms control. This part of the programme was gradually phased out, as the countries working on this component decided to focus its programming efforts on fewer components. However, NCA’s work on small arms reduction before and in the beginning of the 2011-2014 period was an important basis for our advocacy engagement in the Arms Trade Treaty process (see chapter 7). Over the period there has been a continuous focus on professionalisation of the income generation efforts when working with youth at risk, as there is a risk of deepening the frustration of this group if they go through training without improving their prospects of gaining a sustainable livelihood. These efforts have born fruit in several countries, but in Haiti and Mali18, many of the 1,351 youth trained failed to increase their income as a result of the training. This can be partly attributed to increased level of overall conflict in these settings affecting the implementation, but also illustrates the need to continue sharpening the economic aspects of these trainings. In the upcoming period income generation for youth at risk will therefore be included in the new Economic Empowerment and Climate Resilience programmes. The experience from working with local peace committees is a testimony to the importance of building local structures as a measure of prevention and resilience: although it is impossible to document, there are clear indications that these structures not only resolved existing violent conflicts but contributed to preventing new ones from occurring.

Furthermore, through preventing and resolving conflicts linked to land, water and other resources, these structures had an important function in enabling productive activities in the communities. The focus on working with local peacebuilding structures will be continued in NCA’s new peacebuilding programme in the next strategy.

Achieved in Burundi, Mali, Afghanistan and South Sudan, while not fully achieved in Haiti and the Dominican Republic. Local peace committees intervened in more than 1,500 local conflicts related to land use, political issues, access to water sources, domestic problems and other questions in Mali, South-Sudan, Afghanistan and Burundi, contributing to improved relations between ethnic groups, prevention of continued conflict related violence and enabling rights-holders to resume productive activities related to the use of natural resources.

Achieved in Brazil, while not fully achieved in DRC. In target areas in Brazil, hundreds of youth participated in events and mobilisations, and 24 youth were specifically trained to promote a culture of peace in their communities. In the cities of Paulo Afonso and Delmiro Gouveia, these youth also had extensive dialogue with local authorities to influence public security and youth policies, proposing measures for prevention of violence.

OUTCOME 3: Duty-bearers are challenged to address key drivers of conflict

Achieved in South Sudan, Haiti, Burundi and Afghanistan. NCA’s role was to mobilise and/or support primarily faith-based actors in engaging duty-bearers through measures like facilitation of dialogue, exposure visits, research, development of position papers, mediation and participation in peace negotiations. For example, in South Sudan, NCA has supported faith-based organisations’ delegation to the IGAD led peace talks, and these actors have played an important role in bringing grassroots perspectives into the peace talks and bringing information on the results from the peace negotiations back to the grassroots.

OUTCOME 4: Duty-bearers have been influenced to adopt and implement legislation and structures for control of small arms and light weapons

Not achieved in Brazil, as the Brazilian partner working on this issue turned its focus to advocacy on drug policies at the beginning of the reporting period and was later phased out. In 2013, the UN General Assembly finally approved a global Arms Trade Treaty (ATT), which regulates the international trade in conventional arms. The treaty included an assessment criterion for GBV, for which NCA at global level had actively lobbied.

Achieved in South Sudan, DRC, Burundi, Haiti and Mali. More than 9,000 young women and men at risk of being (re)recruited into armed groups, prostitution or crime have completed different types of vocational training and income generating activities, acquiring skills that improve their prospects of increased income from employment, agricultural production or self employment. The extent to which this has led to actual improvements in income minimum 6 months after completed training varies. South Sudan, DRC and Burundi have achieved good results with 65 to 98% of former participants reporting increased income, while percentages are lower and more insecure in Haiti and Mali.