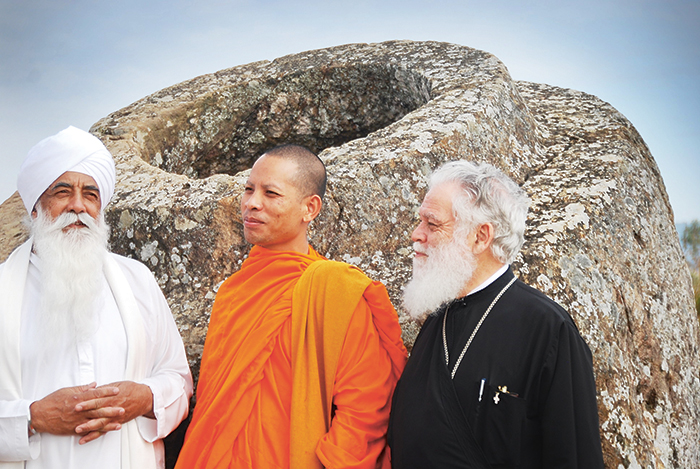 NCA has established and strengthened interfaith peacebuilding structures, which have advocated for sociopolitical change and contributed to prevent and resolve conflicts.

Faith actors have established interfaith structures for cooperation and peacebuilding

Under this programme NCA has contributed to the establishment and strengthening of 44 formal and informal inter- and intra-faith structures. These structures are currently functioning both at national level, like in India, Pakistan, Haiti, and Ethiopia, and on local and intermediate levels in most of the countries where this programme has been implemented. Through regular dialogue on faith issues, the relationship between representatives from different faith communities has improved. The trust built between the members of these structures has furthermore enabled them to jointly engage government bodies on local and national level on issues related to fulfilling citizens’ basic needs, protecting women and minority groups, and taking action to address underlying causes of violent conflict. This has been done through emphasis on mediation, advocacy and lobby. Particularly in contexts where religion is used to mobilise for violence, such as in the case of Pakistan, inter- and intra-faith structures have successfully intervened at an early stage in situations of interreligious tension in order to prevent escalation of conflict.

WHY: Conservative views on women’s roles in society limit women’s opportunity to participate in peacebuilding and decision-making at different levels.

WHAT: Trainings and group dialogues about the roles of women as described in the Bible and Quran.

RESULTS: Religious leaders, women and men at the grassroots have changed their perception of what the roles of women are in society, and an increase in women’s participation in different arenas has been seen.

FBOs and religious leaders often play an important role in shaping peoples’ conceptions of what the appropriate roles of women and men are in society. These norms of gender appropriate roles and behaviour can limit or facilitate women’s participation in peacebuilding processes and decisionmaking in the home and in the public sphere. In many contexts, religious leaders hold conservative views on what women’s roles are, however these are often based on tradition and cultural norms rather than religious teachings. NCA has in contexts like Afghanistan and DRC seen that using faith-based dialogue and resources is an effective way of transforming attitudes linked to perceptions of what women’s roles are in society. The Tamar campaign in DRC is a good example of this: It addresses sensitive topics such as GBV through contextual Bible and Quran studies in groups where both men and women participate.

19 Both inter- and intrafaith

In 2010, NCA started working with interfaith platforms in North and South Kivu, DRC. Leaders from the main religious denominations in DRC19 are equally represented in the platform by one woman and one man from each denomination - which can in itself be seen as a significant step forward in advancing women’s participation in peacebuilding. The interfaith platform engages in dialogue with relevant authorities to discuss conflict related issues and develop action plans together. However, the main focus in their work has been in changing social norms about gender, using the Tamar campaign as its main tool. The interfaith platform trained 1,280 community organisers, who facilitated approximately 750 bible study circles, with the participation of more than 5,000 women and 5,000 men. Many participants expressed appreciation that using the Bible or the Quran as a point of departure allows communities to discuss topics that would otherwise be more difficult. Community members report that the Tamar study circles and the subsequent implementation of gender action plans have contributed to a change of mentality and mind-set. Men’s awareness of gender equality and women’s rights has increased and they have as a result changed their attitudes towards women. This, in turn, has contributed to reducing conflicts within faith communities as well as households. Women have also been empowered to seek assistance when subjected to violence, and there is increased understanding that school is for both boys and girls.

A particular success from the Tamar campaign over the period from 2011 to 2014 is its adoption of the campaign by the Muslim members. The campaign was originally based on the Bible, but the South Kivu interfaith platform developed a Muslim version of the Tamar campaign, based on the Quran. The exercise has generated a lot of enthusiasm and is viewed as a major breakthrough in opening up spaces for reflection and discussion around women’s roles in the context of Islam. In the words of one of the participants, Hadija Saidi (provincial president of Muslim women in North Kivu):

“The Tamar campaign has enabled us Muslim women to sit around the same table with men and discuss women’s rights and issues pertaining to gender justice. In the Mosques, we can now pray with men and feel valued. This is because the campaign has motivated our Imams to seek the Quran teachings that protect women’s rights. Through this, men have come to the realisation that Islam indeed values women very much and has a special place for them.”

The implementation of this programme was halted by strict civil society laws in Sudan and Ethiopia, while in most other contexts the programme was implemented as planned. Achieving equal or at least minimum participation of women in the different levels of NCA supported peace work has been a challenge and the results are not satisfactory. In some contexts, NCA’s focus on working with religious leaders has almost per design made it very difficult to include women, since female Imams and in some areas female pastors and bishops are non-existent. Over the period NCA has started focusing more on the broader group of religious actors, including any resource person - men, women or youth - having some kind of affiliation with larger or smaller faith community structures. This has made it easier to find ways of including women, since women often do hold formal and informal positions in their respective faith communities, although they are not formal religious leaders. These experiences are stepping stones for the NCA’s upcoming strategy, where we will focus on women’s participation in peacebuilding. Furthermore, the work with interfaith structures will be continued, with an increased focus on utilising faithbased methods and resources for peacebuilding.

Achieved in Kenya (East Africa), DRC and Pakistan, while not fully achieved in Haiti, Sudan and Ethiopia. The focus under this outcome has been on establishing and strengthening sustainable interfaith structures as a first step to enable joint action from faith-based actors. Investing in relationship building between the actors in question has been important to achieve this. Between 2011 and 2014, NCA contributed to establish and/or strengthen 44 formal and informal interfaith structures (including in India and Zanzibar).

Achieved in Kenya (East Africa), DRC and Somalia, while not fully achieved in Ethiopia. NCA has empowered women through for example capacity building on conflict transformation and UN’s women, peace and security resolutions, networking between women involved in faith-based peacebuilding, strengthening of regional faith-based actors’ gender/women’s desks and support to women’s participation in mediation teams. With the exception of DRC (see main report), it has, however, so far proven difficult to document the exact effects of this empowerment.

OUTCOME 3: Right-holders are mobilised by faith actors to address driving factors of violent conflicts in their local communities

Achieved in Kenya (East Africa) and Somalia. Through collaboration with province, national and regional faithbased bodies in East Africa, NCA supported an array of peacebuilding initiatives involving religious leaders. For example, in Somalia, the Puntland religious leaders secretariat reached approximately 1,200,000 women and 800,000 men, i.e. 75% of the total Puntland population, with awareness-raising messages on piracy, contributing to an increased awareness on the negative effects of piracy and a reported decrease in community support to pirate groups.

Achieved in Middle East and Pakistan, where different measures were taken to accompany minority groups. For example, in Pakistan, NCA supported different partners working with Madrassas (religious schools) to promote intra/interfaith harmony and rights of religious minorities based on Islamic teachings. One of the partners facilitated the development of a peace textbook for 9th and 10th grade students which has been endorsed for use in Madrassas of different schools of thought in Islam. In the Middle East, the Ecumenical Accompaniment programme has secured stable access to education for more than 4,000 Palestinian children each year.

Achieved in Kenya (East Africa), Middle East and Pakistan, while not fully achieved in Haiti. For example, in East Africa regional faith-based bodies were supported in building linkages to other key civil society actors or decision-making bodies, and the All Africa Council of Churches developed and MoU and set up a liaison office with the African Union.

Achieved in Somalia, Middle East and Pakistan, while not fully achieved in Ethiopia. The nature of the interventions has varied according to context. For example, in Pakistan, religious leaders have regularly participated in TV shows, press conferences, facilitated dialogues between religious groups, engaged in situations of religious tension etc, all in order to discourage religious extremism and sectarianism, which are drivers of conflict in Pakistan.