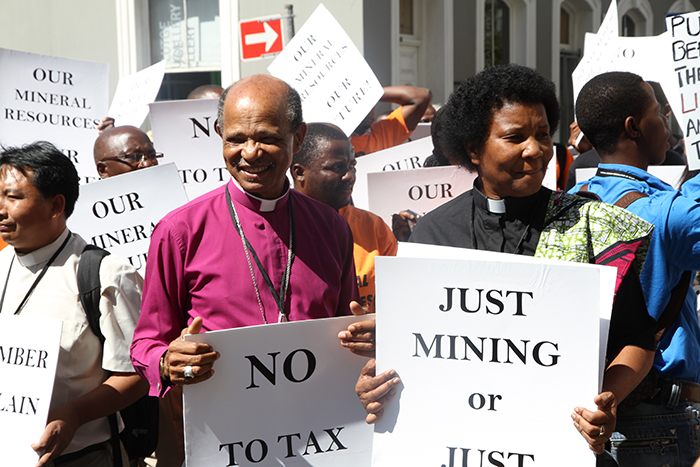 NCA and partners have during the years 2011-2014 made significant contributions to increased transparency and improved governance of public resources in eight countries. This strengthened community rights in connection with extractive industry operations and ensured the implementation of public schemes securing people’s rights to basic social services such as water, health care and education. During the period 2011-2014, 3,508 rights-holders conducted budget monitoring on public budgets. A total of 635 public projects were monitored.

Strengthening civil society is a key component of this programme, which has a strong focus on advocacy; empowering rights-holders to claim their rights and challenge duty-bearers to protect, respect and fulfil peoples’ rights and to hold them accountable to deliver on their duties. Through building and strengthening civil society platforms such as Alternative Mining Indabas and organising people in groups to monitor public budgets and track the expenditures, the programme has contributed to active citizenship, opening spaces for participation and for civil society to hold duty-bearers accountable.

A regional effort for a just extractive industry was initiated in 2010 by NCA faith-based partners with the building of the platform “Alternative Mining Indaba” (AMI) to give an arena for CSOs in Southern Africa to discuss the impacts of extractive industries and join forces across borders. The AMI was established as a response to the annual corporate conference “Mining Indaba”. Until then it had excluded the voice of mining communities and the wider civil society, and it was perceived as focusing only on the benefits of mining investments. In 2014, the regional platform had become global and the numbers of participants increased from 40 to 300, representing 37 different countries. The civil society platform inspired the establishment of national and in some countries provincial alternative mining indaba platforms, linking the international collaboration and advocacy efforts at national and local level. Working through AMIs has enabled cross-border collaboration and generated new knowledge and visibility about the impacts of the extractive industry in Southern Africa. As a result of civil society across and within countries joining voices, partners and religious leaders have increasingly been recognised as relevant actors. For the first time, they are invited to take part in the dialogue and development of policy, and they are being listened to. To exemplify this, in 2014, NCA partners working with AMI were invited for the first time to dialogue and share civil society mining concerns during the mining industry’s annual international conference in South Africa. Many policy and legal changes affecting revenue generation as well as community rights and environmental protection described below sprung out of the work with AMIs.

Advocating for a just extractive industry

WHY: Rights-holders experience few if any benefits from the extractive industry due to poor legal frameworks, limited revenue and a lack of transparency, accountability and participatory governance.

NCA has mobilised and accompanied faith-based partners and religious leaders in South Africa, Mozambique, Malawi, Myanmar, Guatemala, Zambia and Tanzania to take a leading role in the work for a just extractive industry. The partners’ advocacy efforts have resulted in a number of significant policy changes from 2011-2014, as illustrated in the below examples from Tanzania, Mozambique and Zambia.

In Tanzania the report kick-started parliamentary debates. The government initiated new efforts to curb the now evident tax evasion and improve government regulation. An in-depth research on illicit financial flows was commissioned by the government, followed by the establishment of a specialised desk and a department for international taxation. Finally, the advocacy work has contributed to a new law targeting tax evasion being in process. Exposing and reducing tax evasion will likely increase a country’s revenues and potentially enable more investments in development projects benefitting the population.

In Mozambique, after years of pressure from NCA’s partners and others, the government in 2013 finally made public all mining contracts signed with multinational companies. This was a big step towards increased transparency of the mining sector, and the new access to information has provided the Mozambican population with a unique opportunity to monitor and hold the government and companies accountable to a certain standards when it comes to the extraction of mineral resources. Also in countries like Zimbabwe and Malawi the engagement of NCA’s partners in extractive industries advocacy has led to them being involved in the process to revise the countries’ legal framework relating to the extractive sector.

In Zambia, NCA partners’ engagement in the Extractive Industry Transparency Initiative (EITI) process has led to the first ever publication of information about the ownership of mining companies. It is believed that this can contribute to make transparent the vested interest that some owners may have (such as politicians). Partners contributed to new EITI policy reducing the threshold for amounts that companies and government must report on and get reconciled (from ZMW 2.5 to 1 m). This has resulted in more than doubling the number of companies being audited in the Zambian EITI reports (from 16 to 36). The impact of this work is not only a significant transparency achievement, but the EITI reports have become a tool for civil society’s advocacy work in order to help them hold the government accountable. Over the past years, gaps between what mining companies reported as paid and what government reports show received in payments have been reduced. This has contributed to a doubling of the Zambian mining revenue collection (from ZMW 3.7 to 7.7 billion). Increased revenues contribute to Zambia finally gaining more from its mining projects and give access to more capital for development projects that benefit the Zambian population.

Whilst NCA partners have contributed to policy changes, they have also supported communities affected by the extractive industry to ensure that existing policies are implemented. Environmental degradation has severely affected mining communities and their surrounding natural resources such as water and arable land. NCA and partners’ work from 2011-2014 contributed to cleaning up water and air pollution, and prevention of further environmental destruction. In Tanzania, religious leaders have struggled for many years to hold a North Mara mining company accountable to clean up the past years’ water and land pollution, and take necessary measures to prevent future environmental degradation. This pushed the government to send written directions to the mining company. The company finally responded by fulfilling the demands of the religious leaders. They have since built a water purification plant for waste water and secured the tailing dams, resulting in the gradual rehabilitation of the area and reduced environmental and health hazards for the people living in the surrounding communities. The Kankoyo community in Zambia suffered from sulphur dioxide destroying vegetation and worsening the health situation of the people in the community. NCA’s partners trained community members on monitoring pollution levels and facilitated dialogues between the communities and the government environmental agency to address pollution issues. With backing from NCA, partners and the government, the community was empowered to challenge the mining company. The company in turn committed to decrease pollution levels, acquire proper monitoring equipment, and currently captures 95-97% of sulphur dioxide emissions, significantly reducing health and environmental effects on the community.

There are no major deviations recorded in this global programme. One key lesson learned is that working through a Community of Practice has proven a successful platform for sharing programme experiences and methodology between NCA staff across country contexts and has inspired programme adjustments. Mobilising faith-based actors in the fight for community rights and holding governments and companies accountable to their obligations is key to many results achieved in this programme, due to their legitimacy amongst decision-makers and close contact with rights-holders.

Achieved in all focus countries; Angola, Brazil, Malawi, Tanzania and Zambia. 3,508 rights-holders have monitored 635 public projects between 2011-2014. This has resulted in completion of numerous stalled or delayed public service delivery projects in (marginalised) communities. It has also empowered rights-holders to become more active citizens by gaining the confidence, skills and tools to participate in governance of public funds in their area.

OUTCOME 2: Rights-holders have claimed their right to benefit from natural resources

Achieved in Angola, Brazil, Guatemala, Malawi, Southern Africa, Tanzania and Zambia. Not yet achieved in Myanmar, due to new programme start-up, building capacity from scratch in a politically challenging context. Rights-holders have claimed these rights through AMI, public marches, statements, dialogue with government, companies demanding rights to land and compensation, environmental clean-up, transparency, accountability and participation in the management resources. This has in many cases led to duty-bearers taking measures to fulfil their obligations and contributed to results under outcome 4.

Achieved in Brazil, Tanzania and Zambia. Mobilising faith-based actors and empowering communities has contributed to duty-bearers being held to account on communities’ rights in extractive areas. This has led to e.g. mining affected communities getting compensated for their losses when being displaced (Tanzania, Zambia) and community rights being included in new mining act (Brazil).

OUTCOME 5: Duty-bearers have been challenged to demonstrate increased transparency and accountability of public financial flows

Achieved in Tanzania, Angola, Zambia, Southern Africa, Myanmar and Malawi. Most countries have achieved significant results on this outcome. Duty-bearers have been challenged through evidence-based advocacy using research, alternative policy formulations, dialogue meetings, and public committees and hearings. This has led to e.g. public debates on illicit financial flows, policy changes and new government commitments that have improved transparency of public financial flows.

OUTCOME 6: Targeted extractive industries have been challenged to demonstrate increased transparency and accountability on capital flows and compliance to environmental standards

Achieved in Norway, Zambia, Tanzania, and Southern Africa. This outcome has been achieved through evidencebased advocacy work targeting existing and prevention of new pollution, through engaging in initiatives like EITI, and corporate social responsibility. In Norway, NCA published a study and kick-started a public debate challenging Statoil on increased transparency and accountability in their Angola operations. The work has contributed to e.g. increasing public revenues and new environmental measures being taken. NCA’s systematic advocacy work and lobbying for the new country-by-country reporting (CBCR) standards contributed to Statoil having to publish their first full CBCR report for the financial year 2014.

OUTCOME 7: NCA and partners have influenced public debate and/or policies towards a democratic and transparent global financial and aid systems

Achieved in Norway through the work of NCA head office’s policy department. The outcome has been achieved using innovative campaigning and advocacy methods for country-by-country reporting legislation which was implemented in Norway from 2014, promoting “Robin Hood tax”, calling for debt cancellation and pushing for the developing country debt audit conducted by Norway in 2013. Please refer to chapter 7 for more detailed report on this outcome.