One in three women are affected by GBV during their lives. It is a leading cause of death and disability of women of all ages and a barrier to equal participation and gender equality. It also has negative consequences for women’s reproductive health and their access to and control over resources and livelihoods. Building on experiences from the previous strategic period’s Gender Justice programmes, the goal of the GBV programme is for women and girls to live a life free from genderbased violence. The focus is on changing dominant social, cultural and religious norms, attitudes and practices that uphold and condone GBV and gender discrimination. The programme seeks to increase protection of women and girls, prevent GBV, and offer a safe and adequate response to GBV survivors both in NCA’s humanitarian and long-term work. This is done in adherence with international standards for GBV responses. Partners include community and faith-based actors, women’s and other civil society organisations, and relevant networks. Together they facilitate and promote dialogue for raising gender sensitive issues in religions in order to change social and religious norms which condone GBV.

The majority of the countries where NCA implements its GBV programme can be classified as either conflict or post-conflict. Increased sexual violence in war and conflict is a silent weapon of war which seriously affects not only girls and women, but also boys, men and whole communities. Whilst NCA’s global GBV programme addresses this issue, it is the main focus of NCA’s Thematic Programme for Reduction of GBV in Conflict and Post Conflict Settings (GBV CPC) 2015-2017 which is funded by the Norwegian MFA. This programme has seen the scaling up of ongoing GBV projects as well as specific interventions for prevention of GBV and protection of GBV survivors and at risk populations. Examples include the integration of GBV components in WASH projects and capacity building of staff and partners on GBV case management and guidelines. Further highlights from the programme’s 2016 results are presented below and the full report as presented to the Norwegian Ministry of Foreign Affairs (MFA) is available upon request.

The GBV programme is comprehensive in terms of its geographic coverage and has a diverse funding base (ref. pie chart below). This includes funding from the Norwegian MFA for the GBV CPC framework agreement which covers 7 of NCA’s GBV programme’s 14 countries. As part of NCA’s cooperation agreement with Norad, NCA’s country programmes in Somalia and Ethiopia implement two GBV programmes, focusing on female genital mutilation (FGM) and child marriage (CM), together with Save the Children Norway. These multi-year programmes build on experiences from previous programme phases, and both Ethiopia and Somalia are pilot countries in the Norwegian Government’s Strategy for intensifying international efforts for the elimination of female genital mutilation for the period 2014–2017.

Trafficking law to end violence on women and girls in Malawi

Prior to March 2015, Malawi did not have a human trafficking law in place and was rated a tier 2 country in the Trafficking Victims Protection Act (TVPA)8. 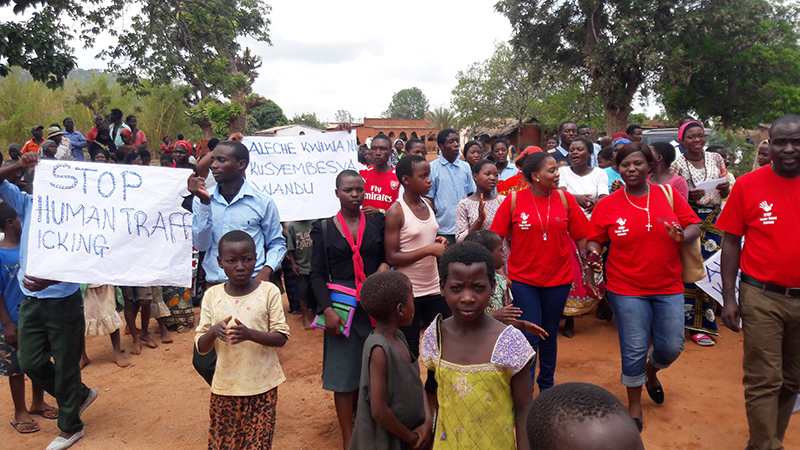 Trafficking in Persons (TIP) cases were addressed using other laws like the Penal Code, Immigration Act, Child Care and Justice Act and the Constitution of Malawi. In 2015, NCA collaborated with partners and the Ministry of Homeland Security to pass a TIP law in Parliament in March of that year. This was followed by the development of a National Plan of Action Against TIP (2017-2020).

Prior to the passage of the anti-TIP law in 2015, there was a lack of national response and effective action to combat TIP in Malawi. In 2007, NCA commissioned an evaluation to understand the magnitude and nature of trafficking of women and children for sexual exploitation. This evaluation established that at least 2,000–5,000 children under 17 and 5,000–8,000 women were trafficked internally and across borders each year. In response, NCA and partners began the long process of lobbying the Malawi government to pass an anti-TIP law.

Since the Trafficking in Persons Act was enacted in 2015, NCA has made significant contributions to the further development of the National Plan of Action (NPA) by supporting partners and the Ministry of Homeland Security to learn from other countries through exchange visits and financial support. The NPA has five priority areas including:

Since the plan was developed, there has been progress towards the prosecution of human trafficking cases in Malawi. Additionally, NCA and partners have conducted sensitisation with community members and religious leaders, in addition to building the capacity of law enforcement agencies like the police, judges and magistrates, partner staff and community volunteers. Through this work, there has been an increase in reporting of TIP cases at the community level.

GIRLS WITH POWER AND DIGNITY

The Great Silence in War

JOINT REPORT NCA - SAVE THE CHILDREN ON FGM RH

SIDE BY SIDE FAITH MOVEMENT FOR GENDER JUSTICE

RESULTS FROM OUR GLOBAL REPORT 2015

THE FUTURE FOR IMPROVING NURSING EDUCATION IN MALAWI