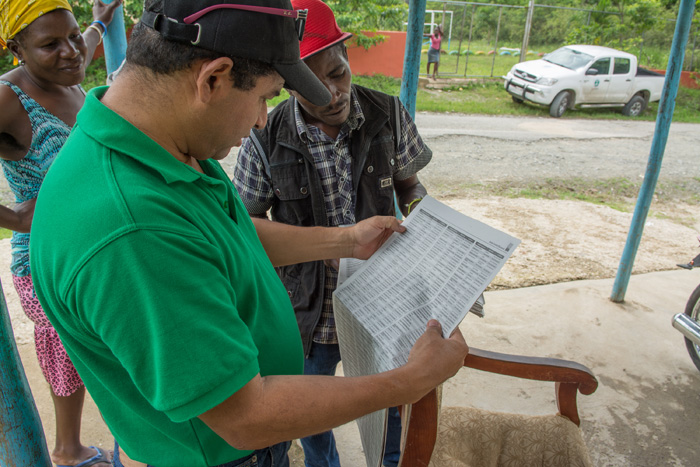 More than 25,600 rights-holders were involved in NCA interventions to reduce the level of community violence in 2015. NCA also established and strengthened local peace committees contributing to improved relations between ethnic groups, prevention of continued violence and enabling rights-holders to resume productive activities. NCA has also contributed to preventing at-risk youth from being (re)recruited into armed groups. The Community Violence and Small Arms Control programme was implemented in the following countries in 2015: Afghanistan, Brazil, Burundi, DR Congo, Haiti, Mali, and South Sudan.

2015 proved to be a challenging year due to political and social tensions arising in both Haiti and the Dominican Republic. Following a court ruling in 2013 and the 2014 implementation of laws affecting migrants’ rights in the Dominican Republic, 55,551 people were deported from the Dominican Republic and another 129,000 people were returned involuntary by their own means to Haiti. The Haitian-Dominican Concertation Commission (CCHD), a binational space for civil society aiming at influencing decisions in Haiti and the Dominican Republic related to migration, participated and provided input at all meetings on the Haitian response plan for assistance to returnees and repatriates. In the difficult context, CCHD with its civil society representation from both countries has a unique advantage to share experiences and cross-border collaboration that does not currently exist between the two governmental authorities on the island. A shared contingency plan was developed by CCHD to reduce the impact of deportations and the so-called “voluntary returns” on communities. In the past, however, international NGOs have had a tendency to dominate the agenda and take the lead on questions concerning migrants and their rights on the island. While this is no longer the case, there was a concern in 2015, in light of the dispute between Haiti and the Dominican Republic, that international NGOs were again about to sidestep local actors. NCA actively lobbied other international NGOs, in close coordination with local partners, to ensure that the leadership of the CCHD remained with local actors. In the end, several of our local partners continued as leaders of this civil society space and were responsible for its coordination. NCA has played additional roles vis-à-vis CCHD and coordinates the planning of the binational quarterly assembly, as well as following up joint action points. NCA has also provided technical support to the platform for joint advocacy initiatives in both countries, such as press releases, information sharing on key binational issues, and the development of a contingency plan. Together with CCHD, NCA helped validate the binational humanitarian needs overview from UNOCHA and IOM. This was a good opportunity for the CSOs in Haiti to challenge the Haitian government in a non-confrontational way on the migration issue. In fact, while other national NGOs and certain international agencies wanted to open camps on the border, NCA’s partner Groupe d’Appui aux Rapatriés & Réfugiés (GARR) and CCHD member insisted that the government develop a more sustainable response that would include the reintegration of deportees into their communities. The response ultimately designed by the Haitian government included this particular point of view.

WHY: In light of the civil war, ethnic groups have acquired weapons and age-old grievances are resolved with violence.

WHAT: Following training from NCA, local peace committees intervened in the conflict together with government officials and found ways for the ethnic groups to restore their ways of resolving their disputes peacefully.

RESULTS: More than a thousand people participated in the peace dialogue and the ethnic groups found ways to resolve their disputes without resorting to weapons or violence.

The Didinga and Toposa ethnic groups have always enjoyed a bitter-sweet relationship. The two ethnic groups face contrasting climate conditions, which is a source of conflict for them. The Didinga people live along the Didinga Mountain, with constant rains providing lush grazing land and abundant water sources. This rich climate enables the Didinga to practice various economic activities such as farming and cattle rearing. They also engage in small-scale gold mining. The Toposa area on the other hand, is a semi-arid region with very little rain and a severe dry season. The Toposa are mainly cattle nomads, who migrate to Didinga land for pasture and water for their cattle during dry seasons. As one Didinga Chief describes it: “The Toposa are friendly, and readily accept peace during dry seasons only…” The Didinga allegedly accuses the Toposa of stealing Didinga cattle and of killing people. The Toposa on the other hand, accuse the Didinga of not only raiding cattle, but also abducting and killing Toposa children who they find either in the gardens or taking care of the calves. This has led to revenge killings, cattle raids, child abduction, reduced agricultural activities and even blocking of the main road between the two areas.

Under the auspices of the Monyomiji Support Group, NCA partner Catholic Diocese of Torit (CDOT) trained local peace committees in both communities. The purpose of the training was to equip them with mediation, negotiation and conflict analysis skills needed to manage the conflict between the two tribes. The peace dialogue that was initiated gathered more than 1,000 participants from the region, and was attended by senior government officials, representatives of other political parties, and commanders of the armed forces. The dialogue ensured that the Kapoeta to Ngauro road remained open, securing access to food and medicines for the communities. This commitment to team up would be unheard of, had it not been for the peace committees collaborating with the government. Toposa leaders agreed to consult with the leaders and chiefs of Didinga before they bring their cattle for grazing in Didinga areas. The Didinga chiefs also agreed to share the grazing and water points with Toposa during the dry season. A joint resolution addressing many accumulated issues of grievances was signed by all parties involved. It should be noted that such discussions were the norm in the past, but with the social breakdown in light of civil wars and the acquisition of arms and ammunition, force had become a preferred method. Now, there is an awareness and mobilisation of both communities to embrace peace and return to their age-old traditional dispute mechanisms. Immediately after agreeing that the road should be reopened, both Didinga and Toposa chiefs immediately travelled together to Nguaro.

WHY: Youth at risk of being recruited into violent political wings seldom have economic opportunities that would prevent them from engaging in violent activities.

WHAT: Youth associations provided young people with income generating activities, civic education and peacebuilding skills to prevent them from engaging in violence.

RESULTS: Young people are now less likely to engage in violent activities and participated in violence prevention in their communities.

An NCA conflict analysis and needs assessment showed that political conflicts were particularly prevalent in Kirundo and Bujumbura provinces during the 2010 elections in Burundi. Perpetrators of violence were often members of youth wings of the political parties and economically disempowered. The general elections held again in 2015, resulted in widespread violence in the country. However, in NCA target communities, violence was reported to be very limited. Young people reportedly decided to resist political manipulation and were proactive in calming tensions in their communities. We believe that NCA and partners contributed to this through supporting local peace committees. They successfully mediated no less than 2,500 conflicts during the election year, a sharp increase from previous years.

In 2015, NCA also saw a need to start working with youth-only peace committees in the capital Bujumbura, which was the centre of the political conflict. 282 youth association representatives and 35 local leaders contributed to limit election violence in violence prone communities, owing to new peacebuilding skills gained through training provided. In addition, a total of 1,360 youth (748 young women and 612 young men) received income-generating support from NCA partners. Organised into 49 already established groups, these young people received training in how to make business plans, carry out profitability studies, and do a market analysis. They were also trained in modern farming techniques and in financial literacy. Ernest Nkezabahizi (29) joined a youth association organised by one of NCA’s partners in late 2013. “I had one main objective: to make money and help other vulnerable youth”, Ernest recalls. “When I joined the association, I began thinking about everything that would help me secure income. Every time that I was invited to the training, I would save the 2.50 USD given as transportation allowance and go back home by foot instead of paying for a cyclist. With that money, I would buy a chicken. At the end of 2014, I already had 50 chickens that I sold in Rwanda for 500,000 Rwandan francs, equivalent to one million Burundi francs. With the help of the facilitator, I got a drivers license, bought a motorcycle and became a motorcycle taxi driver. A couple of weeks ago, I bought a car that I am using as a taxi. I have recently bought a piece of land in the centre of town and I plan to start building a house this summer. I currently employ 10 youth in my different income generating activities, some in livestock rearing and farming, and one as a motorcycle driver. I not only give them jobs but I also coach them on how they can overcome poverty.”

Ernest, who is very conscious of the fact that his starting point was an association, is never absent from meetings and swears that he will never leave the association. These mixed-gender youth associations have institutional structures and are registered at the municipality level. They meet once or twice a week either for capacity building, an evaluation meeting or to implement joint income generating activities.

The opportunities to effectively influence duty bearers in Haiti, the Dominican Republic and Burundi were fewer than expected due to tensions at country level or between the countries. The work addressing at-risk youth in Mali, South Sudan and Haiti remained small in scope and gave limited results. These projects will therefore be phased out or included in the economic empowerment programme from 2016 and onwards.

An important lesson learned from this programme relates to the importance of having local structures for conflict transformation in place when large-scale conflicts break out. This was seen in the 2015 case from Burundi, where peace committees played an important role in mediating local conflicts arising from the national level conflict. While these efforts did not change the dynamics of the national level conflict, there are indications that they did reduce the impact of it on the local level. The same was seen in Mali when national level conflict resurfaced in 2012-13. NCA-supported local peace committees were able to adapt to the new situation and mediate both new and pre-existing conflicts and contribute to reducing the impact of conflict on people’s lives.

Achieved in Burundi, Mali, Afghanistan and South Sudan, while not fully achieved in Haiti and the Dominican Republic. The results were mainly achieved through building the capacity of local peace structures, which intervened in local level conflicts.

Achieved in DRC, where youth organised a peace caravan in Goma during “Peace One Day” and participated in football matches with other members of the community. Partners have further implemented theatre activities and start-up accompaniment of youth village savings groups.

Good results achieved in Haiti, Burundi, DRC, Afghanistan, and South Sudan. However, both Burundi and Haiti faced challenges due to high tensions at national level, and the long-term impact of the work with duty-bearers in the different countries is still not clear.

OUTCOME 4: Duty bearers have been influenced to adopt and implement legislation and structures for control of small arms and light weapons

With the phasing-out of the programme in Brazil, no other countries were scheduled to report on this outcome.

Achieved in Burundi, and DRC, while partially achieved in South Sudan, Haiti and Mali, largely through vocational training or income generating activities in combination with counselling and training in life skills and entrepreneurship.