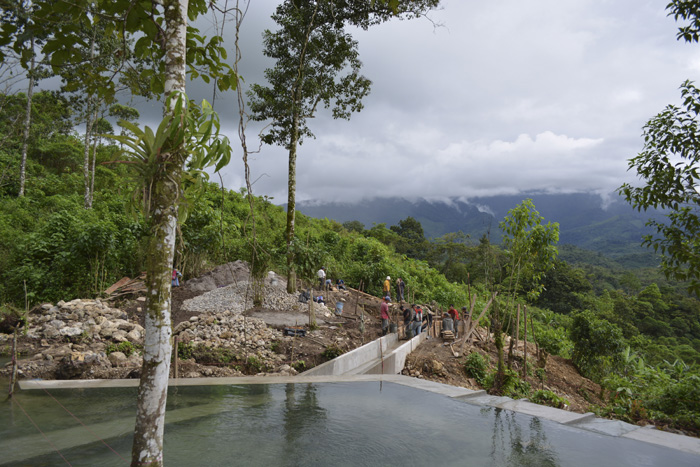 As NCA embarks on a new strategy, Faith in Action, we are encouraged by the results we have achieved together with partners and look forward to continue fostering positive changes.

7.1 RESOURCES OF RELIGION AND FAITH
7.2 TRANSFORMING RELIGIOUS DISCOURSE AND PRACTICE FROM WITHIN
7.3 FROM STRATEGY TO ACTION

NCA’s long-term goals are to save lives and seek justice. The new strategy outlines two main strategic directions for NCA in the coming years: an increased focus on humanitarian response and a renewed emphasis on faith-based actors as agents of change within the wider society.

NCA will seek to remain a professional development agency with capacity and drive to work at the nexus of religion and development. The added value and combined resources gained through partnering with faith-based actors has put NCA in a unique position for influencing sustainable change and effective humanitarian responses. Though this partner choice is not new to NCA, we will work more systematically to link knowledge gained through 70 years of working alongside faith-based actors, to NCA’s active engagement in important faith and development networks globally.

To fulfil the ambitions of the Sustainable Development Goals (SDGs) by 2030, the donor community is exploring new models of partnerships, including with faith-based actors. NCA will continue to assist and encourage faithbased actors and faith communities to contribute to reach the SDGs, especially in areas where they have a particular responsibility or an added value that can bring about sustainable change.

In order to achieve greater results and make tangible changes in people’s lives we will further focus our work geographically and programmatically. By concentrating our efforts, we will enable our partners to scale up their activities and have greater impact in society.

7.1 RESOURCES OF RELIGION AND FAITH

This report has presented numerous illustrations of how NCA’s partners mobilise their unique resources to bring about change within their own constituencies and in wider civil society. NCA encourages the development and use of tools and methods that use religion as a springboard to make positive changes in the world and affirm people’s inalienable rights.

Religion is a central component of people’s lives. Religious leaders are in a unique position to influence local faith communities as well as other influential leaders and duty bearers. In religion people find courage to stand up for their rights as well as resilience during difficult times. Faith-based actors enjoy a great degree of respect and trust, and can mobilise not only their communities, but also the wider civil society. The potential they represent is largely untapped. Religion can keep everything in place. But it also has the power to turn the world upside down22. For this reason, religion can be both an obstacle to and a catalyst for change.

In working with faith communities on an agenda for social change, NCA contributes to mobilising religious resources and faith commitment for positive social change through fostering transformation of social norms and practices. Inspired by our Christian identity and mandate as a diaconal organisation, NCA recognises Diakonia as “faith translated into action”. NCA will identify and strengthen the forces and resources within different religious traditions to affirm justice, protect nature, and safeguard the human rights of those who are oppressed. We have made a deliberate and preferential choice to work through faith-based actors as main drivers for change in all NCA’s programmes because:

7.2 TRANSFORMING RELIGIOUS DISCOURSE AND PRACTICE FROM WITHIN

When NCA and faith-based partners work together on an agenda for social change, we integrate various religious resources into our methodologies and activities. When working together with faith communities and broader civil society, NCA’s expertise lies in facilitating dialogue around sensitive issues related to social, religious and cultural norms and practices and being a bridge between faith-based actors and secular human rights organisations. Religious leaders and faith communities can be an obstacle for change when they uphold gender discrimination or remain silent on sensitive issues related to marriage, family, and sexual and reproductive health rights. At the same time, religious leaders and faith communities are essential when it comes to changing harmful traditional practices and negative social norms. Below is an example of how NCA has worked with partners to transform social attitudes about gender from within - using a strategy of transforming religious discourse and faith expressions.

After NCA was awarded the NRK Telethon fundraiser in 2001, NCA started to work intensely with churches, activists from faith communities and civil society in Southern Africa to address the HIV pandemic. At the time, HIV and AIDS were regarded a development disaster capable of rolling back decades of development results. Because HIV is transmitted via sexual relations, this proved to be a highly sensitive issue for the churches. Early reactions from faith communities included silence, labelling people as sinners as well as stigmatising and excluding people living with or affected by HIV and AIDS (PLWHA). After almost two decades of dialogue and action targeting faith communities, they now have changed their view of PLWHA. This transformation has contributed to changing social attitudes and has been essential to bringing the pandemic under control in the region. Between 2011 and 2015, churches in Southern Africa have faced a new challenge of how to respond to sexual minorities and their role in church and society. Homosexual practice is still illegal in most of the region, and there have been violent attacks on lesbian, gay, bisexual, transgender/transsexual and intersex (LGBTI) people who have disclosed their status, as well as against human rights defenders of sexual minorities. How do faith communities respond to sexual minorities when they perceive them to be living lives that deviate from accepted religious discourse and practice?

To address this issue, NCA has continued to partner with HIV and AIDS faith activist and resource organisations, such as EHAIA, INERELLA, and PACSA, and provided support to new LGBTI faith activist and resource organisations like IAM. We are seeing that the lessons learned and tools developed to address sensitive sexuality issues in HIV and AIDS work are now further applied to address emerging issues, such as LGBTI rights. As HIV and AIDS has become an issue that can be discussed within religious discourse, it is used as an entry point for bringing up more difficult issues like same-sex relations. NCA continues to play a role in facilitating linkages between faith activist organisations and church networks, such as the Southern Africa Catholic Bishops Conference (SACBC) and the Fellowship of Councils of Churches in Southern Africa (FOCCISA). These linkages have led to important pilot efforts raising awareness on LGBTI issues within faith communities and the wider society, as demonstrated in Violence Kills Progress – Stories of Gender Based Violence. This media project has interviewed South African women survivors of violence and LGBTI community members. NCA has supported the dissemination of a gender toolkit for churches Created in God’s Image, which was substantially revised in 2014.

In 2015, two new modules on masculinity and LGBTI were developed and included and the following national councils of churches received training on these: Botswana, Mozambique, Namibia, Lesotho, South Africa, Swaziland, Zambia and Zimbabwe.

7.3 FROM STRATEGY TO ACTION

NCA’s 2016-2020 Programme Plan is one of the key documents to operationalise the new Global Strategy and will contribute to better results in each country NCA operates. It builds on experiences from the 2011-2015 strategy in terms of what worked well and where adjustments are needed. One improvement is the restructuring of the relationship between global programmes and country programmes. The country level will now be the main focus for programming, as this is where impact is more evident. The global programmes will be important for documenting results on a global level, building a “One NCA” identity, developing common methods and tools, facilitating south-south cooperation, sharing best practices and finally for developing competency.

Through renewing its commitment to engaging faith-based actors, NCA will reach greater numbers of vulnerable and marginalised people, as well as strengthen our pro-poor advocacy. A thematic concentration compared to the previous strategy has focused the number of global programmes from twelve down to six, in addition to NCA’s Humanitarian Action programme. At country level, this translates to each country strategy incorporating a maximum of three global programmes. Coupled with NCA’s commitment to geographic concentration detailed in Chapter 6.1, this will allow NCA to scale up our programmes where we have the most impact based on our distinctive added value.

NCA’s new programme plan demonstrates how the organisation plans to strengthen the interaction between citizens and states through strengthening civil society. Each global programme contributes to strengthening civil society, and ultimately to saving lives and seeking justice. The plan introduces a new global programme, Economic Empowerment, which builds on best practices in NCA’s Livelihood and Trade programme from the former strategy, with a greater emphasis on vocational training and employment for women and youth; enterprise development and entrepreneurship; and agriculture and value chain development. It seeks to increase project’s potential for scale and profit, through innovative partnerships with and learning from the private sector.

The plan continues to expand NCA’s work with Gender Based Violence (GBV) and Reproductive Health and given that gender inequality is one of the main drivers of poverty and of poor health, NCA will work on consolidating programming between these two areas of work. Focus will be on improving the health situation of women and children by working with local communities and strengthening the capacity of health clinics and services, including midwifery and nursing education. It will also be on challenging and mobilising faith-based actors and communities to reduce GBV.

The Peacebuilding programme will continue with a more pronounced focus on faith-based actors and a reinforced emphasis on diminishing violence between groups. The participation of women and youth will be prioritised, whereas protection of women in conflict situations will be included in the GBV programme.

The Natural Resource Governance programme builds on the previous strategy’s Resources and Finance programme with a strengthened focus on natural resource governance, budget monitoring and capital flight. NCA’s two former climate programmes have been consolidated into the new Climate Resilience programme with a focus on improve preparedness, response and recovery through community structures such as community task forces. The Water, Sanitation and Hygiene (WASH) programme continues with a renewed focus on community participation and sanitation.

The Humanitarian Strategy 2016-2020 is another key document to operationalise Faith in Action. It defines the global strategic ambition for NCA to be a leading, reliable and preferred humanitarian actor, specialising in ensuring WASH services in humanitarian crises. It commits NCA to adhering to the principles of the humanitarian imperative by working in partnership with local partner organisations, ACT Alliance and the wider humanitarian system, with emphasis on accountability, conflict-sensitivity, market-based approaches, disaster preparedness and advocacy.