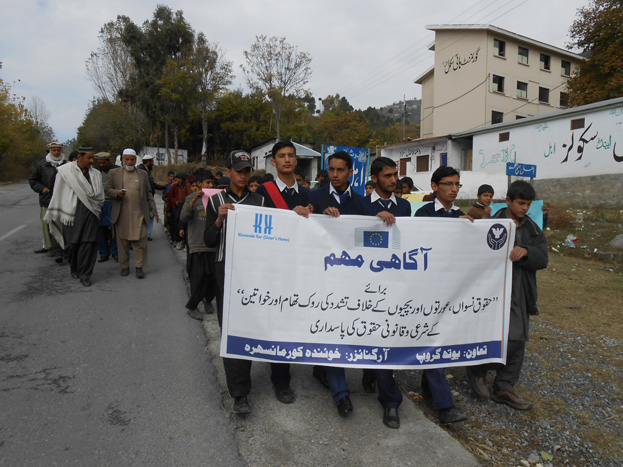 NCA uses an innovative model of cooperation to reduce GBV

NCA has built good relations with the European Commission in Pakistan, and their interest in NCA and its GBV programme has resulted in two recent grants.

In 2015 NCA facilitated the start-up of an innovative community model addressing and preventing GBV, forced and early marriages and denial of inheritance. The innovative component is the fact that NCA has brought faith leaders, civil society actors and public stakeholders together for sharing and interacting on sensitive issues related to GBV, and not least for joint action to combat the issue. The bridging role that NCA played is a key element to reducing the gap and mistrust, which often exists between the sectors. Muslim, Hindu and Christian faith leaders have joined local men and women, as well as volunteer human rights defenders and collaborated with journalists, government officials, health workers, police, marriage registrars and land revenue officers. The results from this cooperation have been impressive. Community groups have actively raised awareness to prevent domestic violence and more than 200 religious leaders and Civil Society Organisations (CSOs) have been encouraged to use their own institutions and platforms to support survivors of GBV. In one district, religious leaders decided on an action plan to regularly include women’s rights in sermons and prayers, and to discuss women’s rights to inheritance before marriage ceremonies.

Other significant milestones resulting from the project to date include more girls continuing their education beyond puberty; women and men increasingly sharing concerns and talking about sensitive issues; and men and boys trained in positive masculinity acting as role models and preventing forced and early marriages. NCA’s effort to engage men and boys was showcased at an international symposium. As a result of this, the article “Keeping the Faith: Moving towards Gender Justice through Religious Institutions” appeared in the 2015 Women’s UN Report Network (WUNRN) publication Windows to working with men and boys.