Nutritious Meals for a Family in Need

As part of the Beirut blast emergency response, Norwegian Church Aid has been providing hot meals to vulnerable families that were affected by the blast. The activity has been implemented through NCA’s longtime partner, International Orthodox Christian Charities’ (IOCC).

Bourj Hammoud is a town located in northeast Beirut. As the field team arrives at Randa’s home to deliver lunch for her family, the 45-year-old mother expresses how grateful she is for the hot meals she receives through NCA’s emergency response for the Beirut port explosion.

Randa, who is a single mother and the sole provider for her family, lives day to day, making what income she can by collecting scrap metal from streets and alleys in her neighborhood. She lost her job as a housekeeper due to the COVID-19 pandemic and economic crisis in Lebanon.

“Selling scrap does not help me feed my children or send them to school,” said Randa.

“If people had not volunteered to fix cracks in the walls, glass, and doors as a result of the Beirut explosion, rain would have filled my house, which is already humid and small.”

As she has been unemployed for almost a year, Randa cannot afford basic necessities, including food and laundry detergent, or to pay for someone to fix her laundry machine and electricity cables, which were damaged as a result of Beirut explosion.

Randa’s husband left her and the family 15 years ago. Since then, she had provided for her two children, Patrick, 15, and Sleiman, 30, (who also lost his job due to the economic crisis), with the small income she made as a housekeeper (about $12 per month). Randa also lost a 20-year-old-son, Anthony, in a car accident three years ago. All those hardships have taken a toll on the mother, who also suffers from trauma since the Beirut blast.

Currently, Randa lives with her brother, Robert, in a small, damp house, just to keep a roof above their heads. Robert is also unemployed, and has two daughters: Pierette, 13, and Eliana, 15, who stopped going to school due to a psychiatric illness. Randa owes the landlord about $2,350 for the last six years of rent.

Moreover, Randa suffers from a ruptured disc and diabetes and cannot afford the blood tests she needs to monitor her illness.

“If I don’t receive this food, my family and I would go without any,” Randa said.

NCA and partners are helping Randa and Robert’s family, and hundreds of other vulnerable families in Bourj Hammoud, Nabaa, and Ashrafieh. They get hot meals through the community kitchen that started operating directly after explosion, to ensure the most vulnerable families are receiving the food they need. 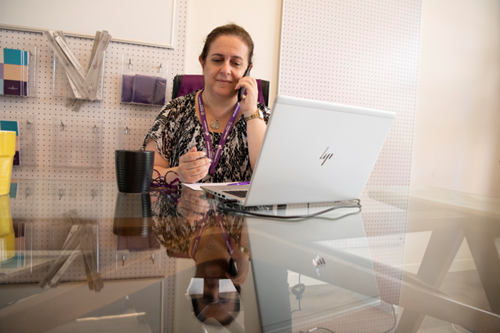